On Monday March 30, Dr. Johanna Fernández was scheduled to visit political prisoner Mumia Abu Jamal because he sounded sick when they spoke the week before. That is when she discovered he had been transferred from prison to the hospital and was admitted to the Intensive Care Unit at Schukylkill Medical Center Monday morning after losing consciousness due to diabetic shock.

When his family and supporters tried to visit Mumia in hospital, they were denied access. Only after twenty hours of vigil and national and international pressure through a mass phone-in, were Mumia’s wife Wadiya and his brother Keith given thirty minutes each to see him. Pam Africa, his emergency medical contact, and his lawyer were denied access.

On Wednesday, his brother Bill and son Jamal were allowed to visit him, and reported that his condition was distressing: his breathing was labored, he was in pain, shaking and thirsty and remained chained with one hand to the rail of his hospital bed. The Pennsylvania Department of Corrections announced the same day that immediate family members would only be permitted to visit once a week, meaning that he would have no further visits until next Wednesday. Mumia’s medical emergency could have been prevented if authorities had taken seriously his declining medical condition since January and not denied him access to details about three blood tests he had done in February that might have indicated he was suffering from diabetes.

Mumia Abu-Jamal is a journalist and former Black Panther who was convicted and sentenced to death in July 1982 for the alleged murder of a police officer. Activists, celebrities, and political organizations criticized the lack of fairness of his trial, widely considered a frame up. In 2011, Mumia was finally taken off death row after 30 years though he is still incarcerated for life without parole despite being recognized by international human rights organizations as a political prisoner.

Mumia was transferred back to prison from the Intensive Care Unit at 7pm on Wednesday. His potassium level is still dangerously high and he is not being allowed visitors because, despite transferring him out of hospital, the prison is saying his health condition is sensitive. 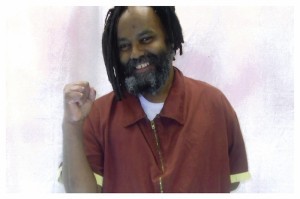 Today Friday, April 3rd, the Campaign to Bring Mumia Home is asking supporters to organize caravans to the Pennsylvania Department of Corrections to rally at 11am. For those unable to go to PA, the campaign encourages supporters to put forth their own demands and to air their grievances concerning prison conditions and prisoner health care at their local Attorney General’s Office.

It is time to bring Mumia home! Follow @BringMumiaHome and hashtag #MumiaMustLive to join the conversation. To read more about Mumia Abu Jamal’s work and significance, visit The Feminist Wire’s Forum on Mumia and Mass Incarceration published in January 2014 (links below). For more information and latest updates on his case, health situation and the campaign for Mumia’s release, visit BringMumiaHome.com and PrisonRadio.org.