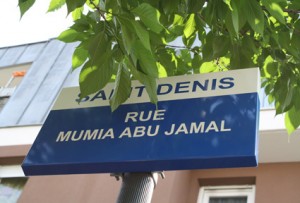 I began writing to Mumia Abu-Jamal in December 2011 while he was in the liminal space between Death Row at SCI Greene and his release into the general population at Mahanoy Prison.  During the seven weeks that he was in “the hole,” we communicated in a series of hand-written notes back and forth. I am not part of the “Campaign to Bring Mumia Home.” I do not attend meetings.  I do not march for his freedom. But I do ponder his confinement. As a scholar of slavery I am haunted by the loneliness, depression, strength, and sadness of our ancestors.  I know the frustration of a dream deferred. I know what it is to hope for something that is unimaginable. I also knew that wishing for something and being prepared for it was often two different things. As I penned that first letter, I realized that writing to Mumia meant writing honestly even if it meant exposing my own vulnerabilities.   There is no filter in prison.  Point. Blank. Period.

In June 2013, I planned a series of days celebrating my 40th birthday with friends in New York City.  I chose to kick off the weekend by visiting Mumia. Through a bit of firm pleading, I was put on his visitors list.  This was not something I took lightly.  Names are added every three months; and in order for one person to be added, someone else has to be dropped.

Having never been to a prison before, I was not sure what to expect.  My appointed guide, Johanna Fernandez, unexpectedly departed to meet with another prisoner in a different part of the prison.  Okay, so I was going to meet Mumia Abu-Jamal by myself. The guard at the front desk called some unknown location and told the person on the other end of the phone, “Abu-Jamal. He has a visitor. Yep. [Strip] the boy and get him ready.” I was sick to my stomach.  I was reminded of the auction blocks where enslaved people showed their teeth, their breasts, and between their legs to verify if they were a good investment.

I tried my best to mask my own insecurities.  Here was a man who wrote his first three books in longhand; has streets named after him in other countries; and who survived 28 years on Death Row.  Here was also a man convicted of murder. Regardless of my belief in his innocence, in those minutes that I waited for him to emerge, I prepared myself for the possibility that upon meeting him; I would suddenly conclude that he was guilty.

He walked into the room. Tall. Dark glasses. Prison uniform.  He scanned the room wondering who of all these visitors was the person he only knew from letters and an occasional phone exchange.  He walked to the front of the room to check in with a guard and I met him there.

I stepped in front of him and introduced myself.  We gave each other an awkward hug. I am not a hugger, and he was just getting used to being touched by people.  We moved to the common area.  We sat side by side.  I realized then that visiting Mumia, like writing to him, meant once again reconciling myself to being honest and vulnerable.  After all, I did demand to visit him.

I was not concerned about having a deep ideological conversation.  Some of the greatest scholars and activists in the country visit Mumia.  I wanted to hear about Mumia, the person. How did he order his day? When did he write? We ended up talking for three-and-a-half hours. We spoke about his surprise upon finding people in the yard eager to hear what he had to say.  We spoke of the words of change he could impart to the other prisoners.  In truth, Mumia does not have a sense of how “big” he is both inside and outside of prison.  Though, he did note with a bit of pride that the prison library is missing some of his books. He quipped, “I assume someone stole them.”  Mumia comes off cool; a Philly cool; a Black Panther cool; a necessary prison cool. But behind the cool façade, he is warm. He is funny. He is sarcastic. He is misunderstood. And from the depths of prison, he radiates light.

He also does his homework. He knew that I was bi-racial, raised in a Mormon household in Salt Lake City, and a scholar of slavery and Black women’s history. One of the first things he said to me was, “How did you survive? I mean how are you even here?”  I chuckled and replied, “I could ask you the same thing.”

We took a picture together, and I noticed that he was shaking. In that moment, I realized that he was just as nervous as I.   Although he was the one who shifted the traffic flow in the common room just by walking—other inmates moved out his way— the man behind the icon was vulnerable.  He is relearning things most of us take for granted.

We still had a lot of time after taking the picture. So, I started telling him about my research. I told him the story of a formerly enslaved woman named Charity Folks. Folks lived in Annapolis, Maryland and lobbied for her freedom, her children’s freedom, and her grandchildren’s freedom.  I told him that buying one’s family out of slavery could take years, indeed decades. There was never a guarantee that an owner would honor their promise to free an enslaved person.  I spoke about how Charity Folk’s vision of freedom influenced future generations of her family.  As I ended the story, he was called back in. I wondered if I had just wasted his time. Maybe we should have talked more about his work?  He hugged me and said goodbye.  As he turned to walk away he raised his fist: “Thanks for the message of hope.” 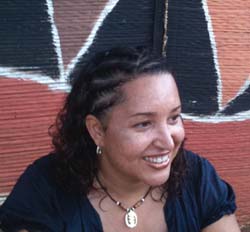 Jessica Millward is an Assistant professor of Slavery and United States History at UC Irvine.  She can be reached at millward@uci.edu or at @drjmil on twitter.