When I first used Pinterest, it was with the same intent and fervor of many of those who create boards that feature fashion, food, and other amusements. But a news story that emerged in 2010 forced me to rethink Pinterest for teaching and research in 2011.

As news emerged that Lonnie David Franklin (dubbed the “Grim Sleeper”) had been caught, I thought back to the first time I heard about the unsolved murders of black women in Southern California. I was a graphic designer at the Los Angeles Sentinel, a black-owned weekly newspaper. Leaving late at night, I was often cautioned to be careful. However, I wasn’t to be too concerned because these women were, after all, “just prostitutes.” As it happened, Franklin was not the only serial killer of black women during that period—there were at least four others. Flash forward and news of Franklin’s arrest stirs me. In an article, I see 180 faces, photographs of unidentified black women. Gone. And then I think of Mitrice Richardson, who disappeared somewhere along a stretch of the Pacific Coast Highway, a route I once frequented, alone. I think of Rekia Boyd, Aiyana Stanley Jones, Kassandra Perkins, Renisha McBride, and the thousands of black girls and women who merit only a brief mention, a moment of outrage, then silence.

I created a Pinterest board as an attempt to understand the collective distance from the violence against black women and girls, compared with the “I am” symbolic that identifies one with black, male victims. What accounts for our reticence to declare, “I am” for Mitrice, Renisha, Rekia, and those 180 black women? Consider, for example, the ways in which the murder of Florida teen Trayvon Martin elicited national and international outrage and a symbolic embodying of Martin (“I am Trayvon” or “If I had a son, he would look like Trayvon”). I am interested in examining the ways in which violence against black men and boys operates at a discursive level that engages the state, signifying a crisis of nation, a “compromised citizenship,” if you will, while violence against black women and girls is a secondary, muted narrative.  My intent isn’t to suggest that we view one or the other as more important, but rather that we consider the ways in which individual, state, and state-sanctioned violence against black men and women, boys and girls, are connected. What might we gain by considering this violence in total? What might we better understand about ourselves and our desire to embody the masculine in a discourse on violence against black people? What do we gain and lose through the claiming of one body and the disavowal of another?

Each semester, I present my Pinterest board to my students. Like me, they are overwhelmed by the questions, the images, and the meanings of so many black women in the void. But I hope that in starting this board I can contribute to the conversation. 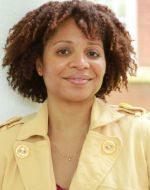 Sonya Donaldson is an assistant professor of World Literature in the English Department at New Jersey City University. She received her Ph.D. from the University of Virginia, where she focused on Afro-German autobiographical narratives. A former technology editor and writer, her research focuses on the intersection of race, gender, class, sexual identity, and technologies.