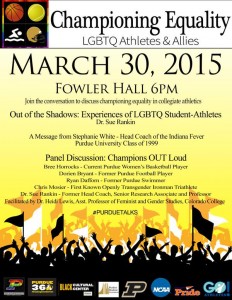 TFW Associate Editor Heidi R. Lewis will be speaking at her doctoral alma mater, Purdue University, on a panel entitled “Champions OUT Loud” during the “Championing Equality: LGBTQ Athletes & Allies” event today at 6 pm in Fowler Hall. The event is sponsored by the LGBTQ Student Alliance, the LGBTQ Center, the Black Cultural Center, Athletics, the Division of Diversity and Inclusion, and the Purdue Student Government. Panel participants include Dr. Sue Rankin, Bree Horrocks, Dorien Bryant, Ryan Dafforn, and Chris Mosier. Heidi will also be giving a talk entitled “When the Man You Are Isn’t the Man You Want to Be: Black Gay Men and the Black Church on FX’s The Shield” during “Lunch & Learn” at the LGBTQ Center on Tuesday, March 31 at 12:30 pm. 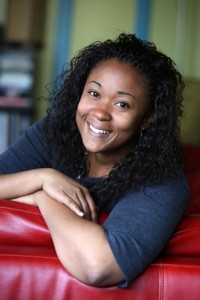 Heidi R. Lewis is an Assistant Professor of Feminist & Gender Studies at Colorado College. Her teaching and research focus on feminist theory, gender and sexuality, Black Studies, Critical Media Studies, Critical Race Theory, Critical Whiteness Studies, social justice, and activism. Her essay “An Examination of the Kanye West’s Higher Education Trilogy” is featured in The Cultural Impact of Kanye West, and her article “Let Me Just Taste You: Li’l Wayne and Rap’s Politics of Cunnlingus” is forthcoming in the Journal of Popular Culture. She has given invited talks at Kim Bevill’s Gender and the Brain Conference, the Frauenkreise Projekt in Berlin, the Educating Children of Color Summit, the Sankofa Lecture Series, the Motherhood Initiative for Research and Community Involvement, the Gender and Media Spring Convocation at Ohio University, and the Conference for Pre-Tenure Women at Purdue University, where she earned a Ph.D. in American Studies (2011) and a Graduate Certificate in Women’s Studies (2008). Heidi has also been a contributor to Mark Anthony Neal’s NewBlackMan, NPR’s “Here and Now,” KOAA news in Colorado Springs, and KRCC radio (the Southeastern Colorado NPR affiliate), and she was featured as a Racialicious “Crush of the Week.” Learn more by following Heidi on Twitter at @therealphdmommy and/or by visiting her FemGeniuses website.