Afterword: A Love Letter to Mumia – The Feminist Wire

Afterword: A Love Letter to Mumia

I have been writing this letter for many years, in my head and in my heart, but have not until now committed the words to paper.  My paralysis comes from a place of shame and rage and love and fear.  It has taken me age to come to terms with the breadth of emotions I carry in the face of your incarceration.  You have come to symbolize the state of us.  I thought that of Palestine also, when I was there, that the people’s struggle was a symbol of humanity’s dreadful amnesia and willingness to go on as usual so long as thresholds for horror remained ‘reasonable’.  The thing is, every time a horror is committed beyond the threshold, the threshold itself is moved. 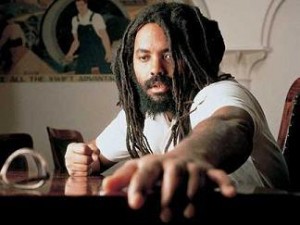 Mumia, when I see you behind bars, when I hear you and reach for you in my imagination, I am reminded of my inadequacies, of our collective ineptitude.  These are not pleasant things to say about us, but we have to face the truth.  Our willingness to go on as usual, except that our sisters and brothers, we, are chained, be it in the prison system or the poverty system, defines us.  Surely, this is only a part of what defines us, but it is a part we can’t keep ignoring, because it is true, brother, that so long as you are not free, none of us can ever be.

The punishment of your dissent has rendered me impuissant.  I feel shame because despite my posturing as a revolutionary, as a servant of the people, despite my venting at the state, at our refusal to be united, at our patriarchy and our capitalism, I know, Mumia, ‘that a wall is but a wall and can be broken down.’  I know what it would take to free you and I know that I haven’t done it yet.  I, and we, have to be about Black in real ways, day and night.  To look around us, right now, is to see that we are, simply put, in a bad way.  I am ashamed that I haven’t done enough for you to be living wherever and however you want, which is really what freedom is for all of us.

I have written this letter to you many times over many years.  Some days I wake up thinking about you. I write you a line in my head and wonder if you know that someone is thinking of you.  Other days, you are the reason I leave the house, do the work. You are the reminder of why struggle, laborious and daily, is my duty and my privilege. I knew of you singularly as a symbol and realized that that is not how I wanted to know you.  So I read: about the young Mumia in the Panthers, the grown Mumia as a father and a journalist.  I got to know you as a friend, a family member, a man, with imperfections and fears, with courage and splendor. As I write this, I’ve had the pleasure of editing an online forum about you and mass incarceration.  Through the voices of people far and wide, I’ve learned more: about Mumia the yoga practitioner and sci-fi fan, about what you have meant to people, about the lengths others will go to silence even Presidential nominees from defending you, about young people and old people who think of you, as I have, on mornings as they are taking their coffee.  And maybe this is where the hope lies: in these simple acts of thinking of you, business does not go on as usual.

Part of why you are still kept in chains is to keep your ideas and your voice away from us, the people you may inspire, the people you may unplug. Your crime is the ability to incite, to speak a political clarity that is for the people.  Your crime is that you loved us, the oppressed, the wretched, and that you love us still.  As though it were illegal, we love you back, quietly, over morning coffee, not too loud for fear of punishment.  You are locked to remind those of us who might try to shine a similar light, to speak a downtrodden truth, to turn mourning wails into battle cries, of our fate.  That to buckle against the system is to extend the wrath of its power.  Until we too are imprisoned, out in the open, by the oppressions that keep us the pawn of those very same oppressions.  They make the warning signs clear: there will be consequences.  The chains, for all their weight, can seem comfortable in the face of these threats.  So comfortable that even our imagination is limited to carrying them.  Those that dare to show up un-cuffed… well, to them… bombs and silence, two survivors. 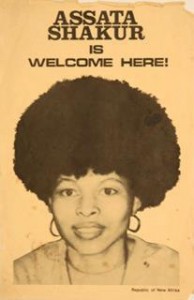 There was a time that I saw a video recording of you.  Until then I had only seen pictures and listened to your radio broadcasts.  Mumia, you scared me.  That’s a strange thing to say, I know.  But, your essence felt so powerfully close to the surface of the body encasing it that I turned away from the power of you.  And, like Assata, “I knew why the United States government were so intent on killing him”.   You scared me and all I have to lose are my chains.  I can only imagine how you make those whose crowns and trinkets might be lost feel.

I once wept just because that day I again knew you were in prison.  It was a Tuesday.  An ordinary day, another day that you are not free.  But weeping only serves the fear and the shame.  My rage and love, I/we must put into my actions, my laughter, into raising our children, into building our family, into growing our garden, building our world, into my pen that writes love letters to Mumia.

Hakima Abbas and Dr. Tanisha Ford would like to thank all the contributors to the ‘Mumia and Mass Incarceration’ forum who shared their stories, insights, perspectives and ideas with us to celebrate Mumia Abu Jamal as well as speak to the issues of mass incarceration and its affects on women, youth, and LGBTIQ people of color.  We give appreciation and gratitude to: Mumia Abu-Jamal, Angela Davis, Johanna Fernandez, Beth Richie, Sonya Donaldson, Olivia Jones, Noelle Hanrahan, Alexis Pauline Gumbs, Clyde Gumbs, and Jared Gumbs, Jamila Wilson, Pam Africa, Ramona Africa, Quincy Scott Jones, Jessica Millward, David J. Leonard, Andrea Ritchie, Layla Kristy Feghali, Meron Wondwosen, Walidah Imarisha, Micol Seigel, Gabriel Teodros, Jamila Wilson, Liz Derias, Johanna Fernandez, Emahunn Campbell, Nyle Fort, Soffiyah Elijah, Christopher M. Tinson and Mark Lewis Taylor.  We also extend our deepest gratitude and love to political prisoners around the world and particularly to those who are languishing in the u.s. prison system for, like Mumia, taking a stand against injustice.  We dedicate this forum to all the women, trans people, young people and men whose lives have been shattered by the prison industrial complex.  We also thank The Feminist Wire editorial collective for all of your sweat and commitment that made this forum possible.

Here is a list of the articles that appeared in the forum, from January 20-27, 2014, offered with gratitude to you, the reader. We hope this will serve as a useful resource.