From Mumia to Rasmea: Political incarceration in the belly of the beast- from Black Liberation to Arab Freedom – The Feminist Wire

Home / Activism / From Mumia to Rasmea: Political incarceration in the belly of the beast- from Black Liberation to Arab Freedom

From Mumia to Rasmea: Political incarceration in the belly of the beast- from Black Liberation to Arab Freedom 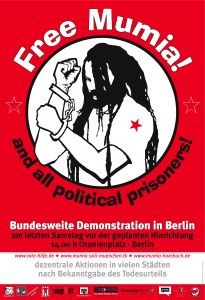 Coming of age as a young US-born Arab woman in the post 9/11 era, Mumia’s case drew clear attention to the connective threads of imperial oppression that threatened my own people and homelands within a larger system of oppression operating globally.  From Mumia and Assata Shakur to Leonard Peltier and the recent case of Rasmea Yousef Odeh, I have seen how political detainment and torture have been consistently used in efforts to control and deter the objectives of multiple nations of people, movements, and contexts respectively.  The message is quite explicit and clear: organized political dissent is a crime worthy of death, be it at the hands of the US government domestically, abroad in detention facilities such as Abu Ghraib, or at the hands of the US sponsored Zionist regime.

Just recently, on Tuesday October 22, 2013, a charge of Unlawful Procurement of Naturalization was made against long standing Palestinian Arab community leader Rasmea Yousef Odeh for allegedly not reporting her arrest in Palestine 45 years ago on her citizenship application.  The Department of Homeland Security, FBI, and ICE agents came to her home to arrest her.  Rasmea is a well-respected member of the Chicago community, associate director of the Arab American Action Network (AAAN), and a committed leader who has consistently supported the rights of the Palestinian and Arab peoples towards dignified human rights at home and within the diaspora.  Amongst her contributions, she has recently guided immigrant and women’s rights efforts for the AAAN in the Chicago area, facilitating a women’s committee comprised of 600 Arab and Muslim women whose empowerment and engagement has flourished under the support of Rasmea’s skillful leadership.  Rasmea’s indictment follows the grand jury subpoenas served to 23 Palestine and Colombia solidarity activists in Chicago, Minneapolis, and Grand Rapids, MI, in 2010. These 23 are still under investigation by the US Attorney’s office in Chicago, for their advocacy and organizing mostly in support of Palestinian rights.  Amongst them is Hatem Abudayyeh, the executive director of the AAAN and one of Rasmea’s closest working partners.  Rasmea currently faces the possibility of being stripped of her US citizenship, followed by a term of 10 years in US prison, and likely, a deportation after the term is over.  Tangible steps can be taken to follow the case and support Rasmea here.

Growing up in the US gave me the advantage of a perspective and analysis mentored by the Black Liberation forces and their experiences in navigating the detrimental effects and strategies of COINTELPRO’s efforts to divide, conquer, and dismantle movements towards liberation.  Much like the Black Liberation Movement, Arab Liberation Movements are marked by a generation of leadership whose political commitments have operated from within periods of torture, political imprisonment, and exile at the hands of the imperial powers that be.  In the example of Palestine alone, an estimated 5,007 Palestinian political prisoners are currently detained in Israeli jails according to records from September 2013, including almost 200 children and 12 women. 516 of these individuals face life sentences (statistics from www.addameer.org).  Since 1967, over 650,000 Palestinians have been taken prisoner; this is 1/4th of the populations living in Gaza and the West Bank areas. The Israeli court consistently violates the basic rights of its Palestinian and other Arab prisoners, and does not honor the obligation to due process or trial.  Children are detained in adult facilities, and regular torture is not exempt for any of the above mentioned prisoner groups. In the US, Arabs are not exempt from detainment on political grounds either.  This was demonstrated obviously during the mass detainments sweeping Arab, South Asian, and Muslim communities in the wake of 9/11, which led, in 2002, to the creation of ‘Homeland Security’ to mediate the “war on terror”, and which has been used since to justify raids on Black, Brown, Asian, Indigenous and Arab organizers, immigrants, and youth alike. 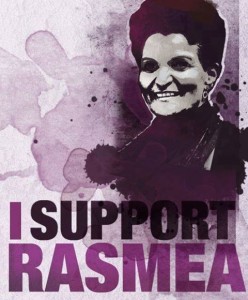 From Mumia to Rasmea, it is vital that our communities confront the attacks on our elders and comrades and not allow our leaders to be swept under the rug in silence and forgotten.  The current repression against Palestinian and Arab community organizers is an extension of the long standing repercussions faced by the Black Liberation Movement’s political prisoners for demonstrating righteous support to their community’s basic needs; it reiterates the continued influence of government agencies and their programs, including the COINTELPRO in its manifest efforts to dissipate our mutual struggles towards basic self-determination and freedom from imperial oppression. The charges against Rasmea are an attack not just on her as an individual and the Arab communities whom she represents and supports, but also on the rightful sanctity of ALL our communities in the continued struggle for justice in the face of imperial exploitation and colonial oppression.

But despite imperial efforts to contain, deter, and squander liberation and its most committed agents across the globe, we remain steadfast somehow in the face of increasing challenges to our basic wellbeing as a people and land. In the most despairing moments, we are ultimately strengthened by the integrity of our determination towards a tangible self-determined justice, and our unbreakable bond to those present, past, and future for and with whom we struggle.  This commitment is powerfully demonstrated by the insistent resilience and ongoing determination of our political prisoners, whose torture and illegal detainment is so often met with an even more steady and uplifted conviction in the work of our collective liberation and right to live well.  Our political prisoners remain a humbling and explicit reminder of what we are up against and what power we have within to implement our collective liberation objectives even in the meekest of circumstances and despite all influences that intend to distract and destroy us.  It is only through consistent organized and proactive commitment that victories HAVE been won in both the Black and Arab communities, and must continue to be waged in support of our collective wellbeing, represented by the rights of our political prisoners. In unity, may our liberation be accelerated by shared action in support of our interconnected, mutually dependent and parallel struggles towards self-determined justice, and a tangible freedom for Mumia, Rasmea, and beyond. 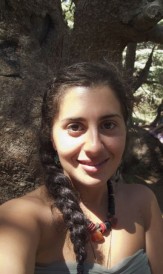 Layla Kristy Feghali is an Arab of Lebanese national origin who is currently based in California.  Born and raised in the US, she worked for several years as a community organizer supporting the interconnected liberation struggles of Black, Arab, and Indigenous peoples, including youth, feminist,  and queer communities throughout the diaspora and our respective homelands. Most currently, she is cultivating her commitment to revive practice of the ancestral forms of medicine which historically have kept our lands and communities self-sufficient, healthy, and in tact.  She holds a Masters in Social Work degree in community mental health, as well as ongoing development in holistic and traditional healing, and training as an herbal medicine practitioner.