COLLEGE FEMINISMS: Until the Last One… – The Feminist Wire

Home / Activism / COLLEGE FEMINISMS: Until the Last One…

COLLEGE FEMINISMS: Until the Last One… 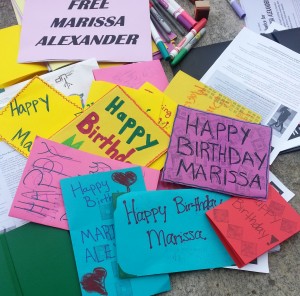 September 14, 2013 was Marissa Alexander’s 33rd birthday.  It is undoubtedly incredibly unfortunate that this black mother of three, who had no prior arrests, was forced to spend this birthday (and at least the next 10, if Florida has its way) behind bars.  What is worse than that, however, is the reason why she was yanked from her community and her family by the penal system:  in a dispute with her estranged husband (who had assaulted her in the past) that escalated into a threatening circumstance where she felt endangered, Marissa fired one warning shot, and injured no one.  In a strange but all-too-familiar turn of events that would otherwise have screamed “self-defense”, Marissa was convicted of three counts of aggravated assault with a deadly weapon and sentenced to 20 years in prison.

On Marissa’s birthday, members of my student organization, Mount Holyoke College’s Students Against Mass Incarceration (SAMI), stood on the streets in downtown Northampton, MA handing out flyers with Marissa’s story and ways people on the outside can be of help.  What many passersby did not expect us to ask for that day though, was their signature for a multitude of birthday cards that we eventually sent to Marissa in prison.  We did this because for many people in prison, of all the things remembered about them, their birthdays are rarely one.  We wanted to make sure Marissa was aware that she was not only remembered on her special day but that she also had our support.

Black women make up the fastest growing population in American prisons.  Black women are increasingly subjected to unfair criminalization and excessive jail/prison sentences.  Even though a judge released Marissa Alexander on bond in time for Thanksgiving, she still faces a long battle when her case is retried. Prosecutor Angela Corey’s attempt at getting the judge to revoke Marissa’s bond is a prime example of how black women are targeted by the (in)justice system. The prison industrial complex is a game of strategy to keep communities of color marginalized, oppressed, and disjointed so that even the possibility of solidarity is unfamiliar and unwelcome. But, we have to work together to effect change. We will not win until the last woman or man is free.

It is so easy to be on the outside preaching reachable victory when the longest threat you have had from law enforcement was a couple of hours sitting handcuffed in a high school.  Thus, I will not claim to know exactly how to end this systematic, institutional, and state-sanctioned attack on communities of color.  But write a letter.  Send a card.  Do your research.  Learn your rights.  Be careful which media sources you’re influenced by when formulating your opinions about the “type” of people who end up in prison.  I am currently not sitting behind the bars of a prison cell writing this, but I do not for a second think that any desire to one day be a wife, a mother, or a grandmother would make me, Marissa, or any other black woman immune from the possibility of criminalization.  Our survival depends not on remaining invisible by upholding social norms, but in remaining mobile.  Ona Move. 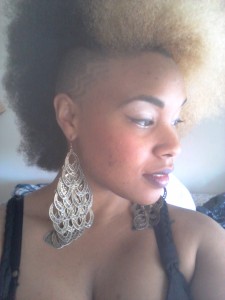 Olivia Jones is originally from Waterbury, CT. She is a senior Politics major at Mount Holyoke College and the co-chair of MHC’s Students Against Mass Incarceration (SAMI) chapter. She plans to pursue a Ph.D in Urban Policy after graduation. Olivia has her work cut out for her in terms of refining her reasons for and methods of social justice activism but she has no doubts that she has found her life’s calling in exactly that.