As we offer this closing statement on our recent Race, Racism, and Anti-Racism Within Feminisms forum, it is essential to consider the embodied consequences of white privilege and how such privilege shapes politics, policy, cultural narratives, and lives.

In her insightful article, Moving the Margins to the Centre: Shifting From Anti-Racist to Pro-Black, Hanna Riaz illuminates the importance of moving beyond ideological opposition to racism toward a bold affirmation of marginalized communities. She writes:

Shifting from anti-racist to pro-Black/People of Colour (or pro-any marginalised group for that matter), means proactively working to move the margins to the centre, to help support and facilitate ways of transforming consciousness as part of transforming structures.

She asserts that it is not enough for allies to support equitable public policy. We must honor the unique, complex humanity of those who have been devalued on the basis of race.

Through our ten-day forum, we have created space to explore the ways that racial privilege can be interrogated and disrupted. As members of Black Women’s Blueprint noted:

A dynamic of neglect, an environment of dismissal, and a culture of misrecognition prevail. The absence of a strong politic on the inherent dignity of Black women and girls as human, and an arrested integration of basic rights for all, as central to any white feminist endeavor does nothing but perpetuate a state of segregation.

It is this “politic of inherent dignity” that we seek to cultivate and understand. This includes challenging cultural scripts of narrative segregation.

The consuming narrative of white privilege expects that the white individual (often male) stand in as a universal emblem of humanity. The story of a white person is supposed to include everyone. But it desperately fails because the voice of white privilege requires the silencing of divergent identities, races, and visions. White privilege is not accidental. It is built on a foundation of historical oppression. It cannot survive unless a designated group is defined as inherently inferior or unworthy. Ultimately, privilege must have bodies to feed on.

The other side of of this narrative is that when the white individual engages in violent, oppressive actions, he is identified as an individual, no longer representative of the whole. For instance, in mainstream media, the white, male terrorist is not viewed as indicative of white masculinity. He is defined as an aberration, a lone lunatic. He is not supposed to be a reflection of his race. In contrast, the actions of one person of color are coded as racial evidence, defining the collective. 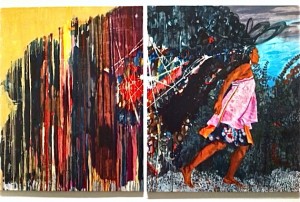 Divergent and dissonant voices hold the key to a sustainable collective of feminist movements.

Yet we have witnessed that when marginalized stories are moved to the center, those who carry white privilege often act inherently excluded. One of the greatest challenges in creating social justice is authentically engaging potential allies who are still blind to ways they reflexively defend their positions.

When marginalized voices are moved to the center, those with race privilege, including white feminists, have often demonstrated a desire to prove a commitment to equality rather than listening and responding to opportunities for self-reflection and growth.

Stephanie Gilmore shared in her Feminists We Love interview that:

To understand sexist oppression, we must understand how racism, cisgenderism, heterosexism, and classism shape sexism; to end sexism, we have to confront all forms of oppression. Of course, this is the hard work – many forces conspire to keep us divided from one another, perpetuating a sort of ‘oppression Olympics’ wherein various –isms are pitted against each other. When we buy into that perspective, we work at odds with one another. To combat these forces, we need our many voices and to see how our individual battles ARE our collective struggle.

The Feminist Wire is a collective of feminist individuals who identify across the spectrum of race, class, gender, gender identity, ability, sexuality, age, and geography. This Forum has been a collection of creative dissent and courageous questions, but it is also a hopeful call to action.

As part of the Forum, we invited contributors to submit Love Notes, a genre that counteracts the violence of oppressions through offerings of praise, support, solidarity, and love. The vital energy of social justice largely derives from an ethic of compassion, even as some of our visceral responses undeniably come from rage and wounds. As cultural healers, critical academics, and engaged activists, we are called to be invested in transformation through radical love–for ourselves and each other–and difficult dialogue.

We are called to be fiercely honest, compassionate, and gracious in our discourse. Radical love can hold our rage, our sadness, and our grief over the ways we have failed each other, and may continue to fail each other. Without love, we remain fractured beyond measure.

In closing, we want to offer an opening; that is, our Forum has been as much about forging dialogue as it has been about trying to locate lived experiences. Over the past ten days, this collection of essays, visual art, poetry, creative nonfiction, and love notes has functioned as an invitation to think critically and to act ethically, to recognize our structural locations, and to innovate new ways of living as allies and practicing community.

As part of our commitment to continuing this dialogue about race, racism, and anti-racism within feminisms, we will continue to publish works that engage our deepest concerns as a collective. We invite you to share your insights with us as we explore more of this fertile and volatile terrain.