Confessions of a Complicated Latina Feminist – The Feminist Wire

Confessions of a Complicated Latina Feminist

“You Americans, why are you so obsessed with labels?”

The way my Brazilian cousin looks at me, she might as well replace the term “labels” with “chains,” or “torture.” And she’s not the first person to have asked me this during my stay in Brazil. Brazilian students always seem to find it strange when I describe myself with words like “Brazilian-American,” or a “feminist.” I say these things with pride, showing off aspects of myself that I treasure the most, but to them I am limiting myself, claiming just as much what I am not and cannot be, as that which I am.

I’ve always been a fan of labels. I like claiming my identity instead of letting others define it. I like owning my titles and shaping my language down to the little details. I collect words like a museum curator collects treasures, carefully choosing “United States,” not “America,” “Latina” not “Hispanic,” “undocumented” not “illegal.” And nowadays “Latina feminist,” not just “feminist.”

That wasn’t always true. For years now I’ve called myself a feminist, using it as a point of pride, my revolutionary statement for the day. But I’ve since met many inspiring and wise women who have influenced me to tweak my title just a little – though with potentially great consequence. Today I’m a Latina feminist, a feminist who concerns herself with and involves herself in struggles that are relevant to all women, particularly women of color. Particularly Latinas.

Part of me hates that I have to modify my feminism to make it clear just what I stand for.  Why qualify something that already acknowledges the principles of intersectionality and transnationalism? But unfortunately, today’s modern, “mainstream” feminism has yet to prove its commitment to anti-racist projects and transnational movements. I’ve had too many conversations with Latinas who I would consider to be incredible feminists, and had them tell me that they feel excluded and out of place in the feminist movement. To these women, “feminist” does not represent them or the struggles their communities face. No #reprorights hashtag is going to address the way they have been demonized for reproducing, the fact that for many women of color, reproductive choice is just as much about the choice to have a child as it is about the choice to terminate a pregnancy. For so many Latinas, violence against women is so much more than intimate partner violence, it is embedded in the stories their mothers told them of military violence and of genocide, or the stop-and-frisk and anti-immigrant policies their communities faced on the street each day.

The same was true for so many of the women I met in rural towns in Brazil. I spoke with domestic workers, fisherwomen, and teachers, all of whom painted a picture of the struggles they faced being women in their professions, cities and homes. Seeing the patience and strength with which they faced each day, it was clear to me that they were feminists. But they would never call themselves that. To them, “feminists” were the women picketing in the capital, pushing to legalize abortion. Feminists were white women, wealthy women, educated women. Feminists yelled too much, didn’t shave, and pushed boundaries.

But the women I spoke to were just as revolutionary even without their signs and megaphones. These women are struggling with even more basic needs, and with fewer resources. Where the “feminists” they knew rejoiced at the passage of the Maria da Penha law to support victims of intimate partner violence, years later rural women are still struggling to get those resources implemented in their town. They are fighting to break down deeply rooted stereotypes about women’s role in the home and in the workplace. They are less concerned about legalizing abortion, and more concerned with having to drive an hour and a half for modern, maternal healthcare. They face much bigger obstacles, with little support, and are still changing the world.

And yet we don’t hear about their stories as much. I love reading about what Planned Parenthood is doing to challenge the new anti-abortion law in North Dakota, but I also want to know what undocumented women are doing to fight anti-immigrant laws in Arizona. I want to know about the Mapuche women struggling to protect their sacred lands from hydroelectric flooding, or Afro-descendent women in Brazil’s quilombos who are fighting for land rights. I want to read about Central American women challenging neoliberal policies that impoverish their countries, or the women that get pulled into migrating to support their families. That’s what my feminism looks like.

And yet I am a complicated Latina feminist. In my blood runs a history of the oppressed and the oppressors, of slaves and indigenous communities, and Portuguese colonizers and German farmers. As someone who is generally read as white, I benefit every day from white and economic privilege, even while my Latina culture is also a very real part of my identity. This means that I can often pass between both worlds unquestioned.

One of the hardest parts of this journey has been recognizing that maybe I do not belong in both, because I cannot speak to the experience of being oppressed like so many other Latinas. In light of this, I’ve often floundered to find my place in this movement, where I can help and not hinder. Part of this has meant talking less and listening more. Another part is in bridging national and language barriers, using my online platforms to amplify Latina voices, and my language skills to translate where needed. I’ve found that the best role I can play is in using my privilege to leverage the voices of women of color into “mainstream” feminism.

Through this, I’ve come to question why we call it “mainstream” feminism in the first place. Not because it represents the struggles of the majority. Not because we’ve voted these issues as priorities, but because those who support them are the loudest, the most visible, with the most resources and support.

Feminism in its different forms has existed for centuries, rural, indigenous and black women have been fighting for their lives for ages. And they still are.

Maybe, if we start listening for their voices, supporting their activism, and integrating their needs into our movements, we can one day call ourselves “feminists” without qualifying whether we are feminists for all, or feminists for some. 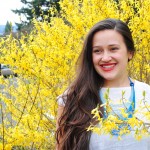 By day, Juliana is a student at University of California, Santa Cruz, finishing up her Latin American & Latin@ Studies major. By night, she is a Latina feminist blogger at Julianabritto.com, where she writes about reproductive health justice, immigration, and feminist movements as they pertain to Latinas in Latin America and the U.S. She pulls on her own experience being half Brazilian, half white American to inform her feminism, working to bring the needs and opinions of Latinas to the feminist blogosphere. Follow her on Twitter @JulianaBrittoS.