Reckoning: Race and Sexual Assault in Colombia – The Feminist Wire

I am a young black American living in Colombia. My life in Medellin has been a multi-faceted privilege, affording me access to spaces and ways of knowing that I would otherwise not have access to in the United States. In one sense, it has been a privilege to live abroad and explore and experiment as an artist, a subject different from the Bachelor’s degree I received last May. Yet, it has also been an unsettling privilege as I learn about black identities in Colombia and the overwhelming visibility and invisibility of forced displacement among black and indigenous Colombians. I want to confess that I have been in Medellin for three months now and have only become more confused by how race is constructed and functions in Colombia. This article thus serves as a reflection of my experiences in Medellin and my desire–and in some ways failure–to locate the experiences of black Colombian women in a local, regional, and/or national context as well as to place their experiences in conversation with the experiences of black women in the U.S.

If I were to recount here all of the awkward race-related situations I have experienced in the past three months, it would be enough to fill an encyclopedia. As a result, I find it very hard to have open dialogues about race in Colombia with Colombians and foreigners alike. My desire to understand race in Colombia has been met with opposition and often conflated with explanations of class disparities. Not wanting to impose my own understanding of how race operates in the context of the U.S. onto Colombia, I have struggled to come to grips with daily interactions and structural inequalities that I would normally identify as a form of racism.

Learning the most about race from Colombians in informal settings, I recently took a chance. I gave a lecture titled, “Seeing Race: Deconstructing Sexual Assault in United States and Colombia.” Within the discussion, I addressed common myths and constructions of victims in the media as well as structural inequalities that prevent specific groups of women from receiving family, community, and institutional support. Admittedly, I am not an expert on sexual assault in Colombia. I formed the lecture to be an open dialogue, in which the audience had the opportunity to share their sentiments and knowledge as well.

Prepared for what would become a discussion about class disparities instead of race, I deliberately focused on race and its relation to sexual assault so that the audience would have a chance to reflect on the similarities between both countries. I was desperately hoping that they would begin to recognize and reckon with the fact that women of color are subjected to sexual assault at higher rates than white women in both countries. I wanted someone to say, “ Yes. It is fucking insane that 1 in 3 American Indian women are sexually assaulted.” I wanted someone to say, “Yes. It is no accident that nearly half of all indigenous and black Colombian women are displaced and that 1 in 5 displaced Colombian women experience sexual assault.”

Unsurprisingly, the majority of the dialogue centered on class differences, as well as how lack of education contributed to women being unable to obtain resources. Throughout the conversation, one woman appeared to make all the connections that I wanted her to. She consistently nodded her head. However, it was not until later that I realized what I really desired from the conversation. I was not looking for recognition from the audience; I was truly hoping that we could spend time together reckoning over the experiences of Black women. It was then that I stopped conflating reckoning with recognition. I was able to recall that reckoning is more than just seeing; it is also having to deal with the situation. Seemingly apparent, I realized that part of my privilege here, as it is in United States, is choosing to reckon with the things that others are not willing to.

I am invested in reckoning with sexual assault and various forms of violence inflicted onto black women’s bodies today because it is a consistent reminder of our history. At times or for all of our lives, we are made invisible, cast into a shadow of the public sphere. We are forced to reckon with our past, as it haunts our present, and promises to destroy our future. As an extension of colonialism, racism operates differently at local levels. Yet it appears that similar outcomes transpire globally.

In the past three months, I have spent more time than ever before thinking about displacement as a part of the black experience. It has pushed me to both expand and reconsider how I understand displacement to work historically and presently in the U.S. Fully aware of the prison industrial complex and its relation to sexual assault in the U.S., displacement has given new meaning to me as I continue to think about the experiences of people of the African Diaspora and the multiple displacements past and present that shape our lived experiences and identities.

What I desire to explore and hopefully come to terms with during my time in Colombia is a feminism that situates the experiences of women of the African Diaspora in conversation with each other. I desire to form relationships among local ways of knowing. So, vital to my understanding of myself is a feminism that bridges the structural inequalities Black women face worldwide. I am in search of a feminism that has multiple roots and not just one entry point. 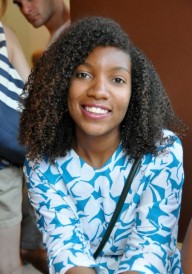 Stacia Penn is a recent graduate of Vassar College (’12) with a concentration in Sociology and Women’s Studies. She is currently living and working in Medellin, Colombia, for an alternative art space. In her spare time, she is testing the waters as an artist, primarily a sculptor and wannabe performance artist. In addition to exploring themes such as race, gender, sexuality, class, and ability, she is quite obsessed with ideas of possession and ownership in respect to material and social relations and how their meaning shifts in public, private, and otherwise ambiguous spaces.

Related ItemsBlack WomenColombiafeminismracismsexual violenceU.S.ViolenceWomen of colorWorld
← Previous Story Love Note To My Sistars
Next Story → Clearing the Path for the Turtle