No Easy Walk to ‘Total Freedom’ – The Feminist Wire

No Easy Walk to ‘Total Freedom’

By Josh Cerretti and Theresa Warburton

What does it mean for a white person living in a white supremacist society to label themselves an ‘anti-racist feminist’? Does it surrender control over the meaning of the term ‘feminist’ (unmodified) to those who tacitly support white supremacy? Does it again re-center the good intentions of white people and their need to be validated by the people of color in whose oppression they are complicit?

Or does ‘anti-racist feminism’ challenge those feminists who don’t interrogate their own complicity in the failure of feminism to live up to Barbara Smith’s concept of ‘total freedom’? Does it signify an affinity with the work of women of color feminists and a conscious adoption of their political priorities, coupled with the acknowledgement that those privileged by certain structures of domination have differing responsibilities for dismantling them than those who are systematically oppressed by those same structures?

Perhaps anti-racist feminism does all this and more. The term acknowledges the racist facets of some historical and contemporary feminisms while presenting an alternative vision of opposition to the oppressions structuring the lives of all people, not just those oppressed in terms of gender and highly privileged otherwise. That is, perhaps the term ‘anti-racist feminism’ is at once both a negation and an affirmation. As people who often refer to ourselves as ‘anti-racist feminists,’ this is how we often think of the term. That ‘anti-racism’ is not necessarily a modifier to feminism, but rather a challenge. Instead of making the term ‘feminism’ more specific, the prefix ‘anti-racist’ is meant to challenge feminism to engage alternatives to white supremacy, settler colonialism, and capitalism.

In this sense, we recognize the need for an explicitly anti-racist feminism. We recognize that by questioning the role feminism can play in creating visions of alternative worlds that eschew these hierarchical models, we must engage the legacies of racism both within feminist movements and in the broader world. We need ‘anti-racist feminism’ because, at the very least, it helps us recognize that no feminism is truly ‘unmodified,’ since one of the ways hierarchy is normalized is by the ability of those occupying privileged spaces to go unmarked, to appear ‘unmodified.’ In the same way that our predecessors and peers have modified everything from Marxism to biology with the ‘feminist’ label in order to highlight the often heteropatriarchal nature of the ‘unmodified’ versions, we can also invoke ‘anti-racism’ in order to acknowledge that feminism is, at times, imbued with the character of the systems it wishes to dismantle. Of course, we hope and strive for feminists contexts where the modifier ‘anti-racist’ is unnecessary—but to assume that feminism is capable of existing outside of the oppressive systems of domination that structure our current world is dangerous. However, the term ‘anti-racist feminism’ poses its own dangers as well.

Women of color have a history of resistance all their own against sexism, racism, and other forms of oppression. Scholars and activists interested in ‘anti-racist feminism’ often point to the collective statement of the Combahee River Collective as one of the formative moments of ‘anti-racist feminism’ because of the way in which the Collective posited the structure of interlocking oppressions. We often recognize the deep and important implications of the work of the collective to “publicly address racism in the white women’s movement” in the late 1970s (“Combahee River Collective Statement,” 8), but few examine how these same women located their “origins in the historical reality of Afro-American women’s continuous life-and-death struggle for survival and liberation” (Ibid. 1). Even the name of the Collective speaks to this point, honoring the 300 black people who fought, led by Harriet Tubman, to free 750 enslaved people at the 1863 Battle of the Combahee River. The histories of women of color—and their feminist genealogies—are not only reactions to white women’s histories, they are stories all their own.

This isn’t to say, of course, that anti-racism is not an important part of the histories of resistance of women of color. Rather, this is to say that the work of women of color has much more to offer than just an analysis of racism within both the feminist movement and our broader social and political worlds. Their knowledge is not ‘provincial’ and limited in applicability when compared to more ‘universal’ (read: white) texts.  The work of women of color is not just about the intersections of sexism and racism; women of color, by virtue of their struggles against these oppressions, have developed what many argue is the most useful vantage point from which to strategize visions for social justice that address interlocking systems of oppression.

Women of color have consistently expressed that their knowledge about interlocking oppression, histories of violence, and methods of resistance arise from their mothers, their families, their friends, and their histories. And, in our quest to be ‘anti-racist feminists’ we cannot afford to detach the anti-racist analysis offered in texts by women of color from their experiences, their histories, or their other myriad contributions to every facet of knowledge production, movement building, and strategizing resistance. To commit to anti-racism, we must commit to trying to understand the history of women of color feminisms beyond a paradigm that sees their feminism as a modification to the hegemonic feminism centered on the histories of white women. We must understand that people come to feminism both differently and differentially, but retain a legitimate claim to it regardless of their route there: that the commitments and challenges we wish to embody through our embrace of feminism are not, have not been, and need not be identical.

So, what do we gain in understanding that women of color feminisms offer more than ‘anti-racism’? For us, we don’t get an answer to the dilemma of ‘modified’ or  ‘unmodified’ feminism: rather, what we hope for is a way out of the dilemma posed by that binary in the first place. By understanding women of color feminisms beyond the challenge they offer to the racism of the women’s liberation movement, we can perhaps come to understand the necessity of modifying ‘feminism’ without requiring those modifications to be static. What we have learned from women of color feminisms is not that feminism itself is inherently racist but rather that all feminism is contingent: it is in motion. That, as people like Chela Sandoval, Andrea Smith, and Gayatri Spivak have pointed out, the term ‘feminist’ has different meanings in different spaces and, because of this, may need to be modified in certain ways to confront structures of domination in the most strategic and productive ways.

The term ‘anti-racist feminism,’ for instance, may not be necessary in a space particularly engaged in anti-racist work. It may be, in that context, that ‘feminism’ is the more powerful and useful term, as it confronts a gender hierarchy that may go unquestioned even amongst well-intentioned opponents of racism. Anti-racist feminism, then, might be most useful wherever the racial politics of feminism regularly go undiscussed (say certain Women’s Studies departments or ‘feminist’ gossip websites). At the same time, drawing a distinction between ‘feminism’ and ‘anti-racist’ feminism in another context (say when trying to save your Women’s Studies department from a cuts-happy Provost or arguing with Men’s Rights Advocates on the internet) is unnecessary.

Of course, the challenge then becomes making space for feminism, or at least our invocations of it, to be malleable enough that we can be strategic in allowing ourselves room to adapt depending on the context in which we may find ourselves, without robbing the term of meaning altogether. We’re more than okay with feminism meaning different things to different people—in fact, we think feminism gains strength from its multiple definitions; but we also won’t surrender feminism to the white supremacists in our midst (or the unintentional white supremacist tendencies of avowed anti-racists, ourselves included). After all, people use ‘feminism’ as an invocation to support a whole array of things that have negative effects of the lives of women, from building more jails to invading Afghanistan. So, how do we manage the space between a ‘feminism’ so unmodified that it becomes meaningless and a host of feminisms that become so specialized that the term…well, becomes meaningless?

For us, Babara Smith’s ‘total freedom’ is an excellent starting point not just because it provides a holistic rather than hierarchical view of liberation but also because it provides the space for building alliances, coalitions, and movements without requiring total obedience to one definition of feminism. It moves us from asking ‘what is feminism?’ to ‘what might total freedom look like?’ This question, rather than requiring endless modifications, spurs other questions which can play productive and essential roles in conceptualizing alternative futures: ‘What might total freedom look like for you? For me? Why are they different? What about for your communities, my communities, and our communities? Where do these communities overlap? Where are they differentiated? Why? How do they interact in ways that are harmful? How can we re-imagine those relationships?’ The possibilities are endless. And they must be.

‘Anti-racist’ cannot be a modification to feminism that we understand as limiting, as narrowing the number of writers, theories, and/or strategies that are useful. Rather, it must be an opening up: an invitation to consider different histories, different paths to liberation, and the differing roles that we all might play in realizing futures imagined as alternatives to the myriad systems of domination that attempt to structure and limit our interactions now.

Josh Cerretti is an anti-racist feminist organizer and scholar based out of Buffalo, NY. He works in LGBTQ outreach at SUNY – University at Buffalo, where he is also a PhD candidate in Global Gender Studies and is working on a dissertation about militarism and sexuality in the post-Cold War United States.

Theresa Warburton is learning how to build solidarity across difference, making 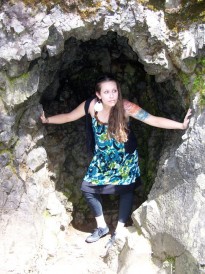 solidarity a core concern of her writing and organizing. She is also a PhD candidate in Global Gender Studies at SUNY – University at Buffalo. She believes in the radical potential of the imagination in creating other possible worlds.