Tilting At Windmills – The Feminist Wire

The thing is: you can let it go. You can shut down your browser, or throw away that newspaper, or turn off your radio and TV, or walk past that poster, or end the conversation – and forget all about it. You can publish a statement about why everyone else is wrong, and countless media outlets will print it word for word, because they do not see the need to investigate a little or even ask what a marginalized person might think of any given situation. You can laugh off the comments on those articles mocking the “oversensitivity” and “political correctness” of other people.

I can’t. My externally defined (and imposed) apperance defaults. It haunts me, and this is neither my choice nor within my control.

I hate “concernment”-centred victimization olympics debates. I hate it when people say that some discriminatory behaviour has “hurt” them and, therefore, the discriminating person should apologize. I’m all for a big ol’ Fuck You, for anger and outrage and argumentative pulping of said discriminating person, because their behaviour, to me, is not about making other people feel sad-faced, but about discriminatory structures they perpetuate through their words and actions and, you know, their racism/sexism/heterosexism/ableism. This is not about an individual “sensation” of discrimination. This is about the fact that someone is racist as hell — like Berlin’s Schlosspark Theater, for example, whose directors simply insist on using Blackface, arguing that this a completely valid practice, and the lack of “Black” roles would make a steady employment of a Black actor unprofitable –and these Black people over here feel kinda sad about it, and politely disagree with a world view that defines Whiteness as unmarked universality, as the “default” of humanity.

And yet, the personal effects of discriminatory behaviour differ greatly. The white people who felt the need to come into the Schlosspark Theater debate (or every other debate about, you know, little controversies like Blackface or not hiring Black people on principle or naming your newest Dresden Zoo monkey Obama as a “tribute” to the President) can leave unharmed. These racists have made what they believe is a point, and after repeating it for ca. 500 times and expecting to be respected as the individualistest individualists who say things like “german-speaking Africans” (you know, Black germans are non-existent), or “There simply were no ‘Black actors'” to hire, or “Random people on the internet, no matter how brown, do not define what racism actually is – we do,” they throw a tantrum when they get pushback and then they flounce out. End of story. Nothing has changed. Goodbye.

You can do that. Because your identity was not questioned or declared as actually non-existent. You don’t have to fight a daily battle for recognition and for being treated with even an ounce of the respect that the defenders of white privilege expect from their critics. If you say something, it is not put into question because of the colour of your skin and ridiculed as mere brown oversensitivity, and your demand or plea to be treated as a full human being is not brushed aside as a bid for exaggerated “political correctness.”

You do not have to answer the same pseudo-arguments over and over and over again, because some racist thinks that they simply have to make this very original point that some other racist has already made and you have refuted 50 posts or minutes ago. You are not expected to cater to the every need of a privileged person because said person wants you to do what they say or need right now, and your duty is to educate them. You will be believed that someone has deleted their former post or has actually said something they now deny to have said, and will not be told that you are making things up in your irrational rage or are incapable of reading comprehension, whereas the actual problem and strategy is gaslighting.

Your arguments will be taken more seriously and will actually be read or heard because you don’t look “exotic” while you make them. You will not be asked if you even know how to read, or if you actually know how to write what you’ve just been saying, because the racist you’re debating with would rather call into question your intellectual capacities and “german credentials” as a Black german person than actually engage with anything you’ve said. You will not have to deal with the fact that, no matter how superior your reasoning or language skills or basic common decency are, someone of the white privileged will always put you back “in your place” and will make sure you know you’re considered inferior and foreign because of your appearance.

As I’ve said: I hate the touchy-feely approach to racism (or any other form of discrimination) – it does not do justice to structural discriminations one bit, I’ve always thought (and continue to think), and individualizes racism as a mere unpleasant personal experience. Also, it tends to make people think that once they’ve apologized for some racist BS they say and do and that is conducted against POC every day by a white privilege society, it’s all good – like apologising for bumping into someone or saying you think they looked better with the old haircut and have thus hurt their feelings. This is not what this is about, people… This is a major fuck-up if you say and do racist shit, you are explicitly taking advantage of the privileged position you are in and are actively helping to perpetuate the marginalization of other people; thus, you are most certainly not entitled to any sort of forgiveness for it. So yeah, you can see: Not a big fan of “hurt feelings”-racism talk.

And yet, if only during this weekend, I had to realise again that it might not be my favourite or even the biggest part, but it is a central and important one. Because the past few days have certainly been a racism overkill experience – and instead of having made a difference or making a change by engaging with racist “arguments” to the point of emotional exhaustion, the Schlosspark Theater keeps posting Blackface photos, mocked POC, and keeps talking about the alleged fact that POC’s definition of racism was “wrong.” The white Blackface fans have been saying the same stupid things for days and still think their points are somewhat relevant, when all of them have been refuted and a mere digital trip down history lane would make these statements obsolete anyway. Some “journalists” cannot be bothered to actually do their job but copy and paste the press releases of the Blackface practising Schlosspark Theater (and deutsches Theater, among others…), and do not even think of the possibility to maybe talk to representatives of organisations of Black people in germany, or to put in the effort to actually read the elaborate criticism. Commentators then pat each other on the shoulder and congratulate each other for the successful displacement of these political-correctness-crazed (yes, it is a sickness, apparently…) POC and others.

And, thus, we have reached rock bottom again in our cycle of hell.

It is tilting at windmills. It is like “groundhog day.” It is tiring and saddening and infuriating and exhausting to talk to walls of white privilege and to witness the open celebration of it. When the adrenaline of being pissed off by some new clusterfuck wears off, there are few things left but the repeated realisation that nothing seems to have changed and that this will happen in the exactly same or slightly different form tomorrow, and that POC do not have the choice to walk away. And that’s not only an abstract discriminatory structure problem, this has very personal consequences.

I think I need a cuppa now. And people should know that. 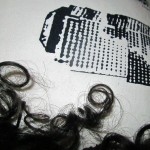 Rebecca Miriam is an Afro-German feminist living in Berlin, who blogs for the biggest German feminist blog, “Maedchenmannschaft” (which translates as “Grrrls Team”), and her own blog, “Stop! Talking.” Her mother is German, her father is African-American. She is currently a doctoral candidate in Historical Studies, focusing on women’s groups in the Civil Rights Movement. She began writing about her experiences with sexism, racism, and intersectional discrimination in 2011.  Feminism in Germany is still very much centered around white, middle-class, academic women, many of which refuse to acknowledge that there is a problem with racism there while being quick to point the finger elsewhere.  She wrote “Tilting At Windmills” after a particularly exhausting debate about the ongoing use of Blackface by various German theater companies and the use of racist language in children’s books.