Some of Us Believe: A Racial Narrative on Catholic Feminist Hybridity – The Feminist Wire

Home / Activism / Some of Us Believe: A Racial Narrative on Catholic Feminist Hybridity

Some of Us Believe: A Racial Narrative on Catholic Feminist Hybridity

I’m aware that religion, faith, and spirituality are not physical attributes.  But for some of us who were inculcated in Filipino Catholicism, there’s very little separation between what runs through your veins and what runs through your soul.  There was never a time when I wasn’t a cisgender girl or woman.  There was never a time when I wasn’t Filipino.  And there was never a time, save the first three months of infancy, when I was not a Catholic.  These three pieces of my identity are braided together with cultural cement.  There is no excavating one without the others. So deeply do I know this about my identity, I refuse to indulge in supposedly nuanced feminist conversations and ignore the tripod holding my identity. Longstanding feminist debates around race and ethnicity have focused on the inseparable duality of race and gender for women of color.  For me, this binary model has served its time.  To move forward, we must demand paradigms that hold our identities for what they are: gems with refracting lights crossing every which way showing our brilliant complexities. We must demand paradigms that honor all the refracting beams.

It didn’t take me long, as I came into my feminist identity, to realize that organized world religion, particularly Catholicism, didn’t groove with public feminist discourse.  There were assumptions in both camps. Catholics aligned feminists with supposedly inhuman abortion providers.  Feminists associated Catholics with blind sheep. Both were insulting and laughably inaccurate.  Though I agree that the personal is political, and sharing that narrative can be a powerful tool in liberation work, putting so much energy into clarifying my identity was expensive.  It cost time that I thought should be spent on real activism, like organizing, fund-raising, supporting progressive campaigns.  As a feminist creative non fiction writer, strengthening my ability to hold the tension of two seemingly polarizing identities is a wonderful feminist and spiritual exercise all on its own, but I never viewed it as activism.

So, I relegated my faith and spirituality to a comfortable hiding place.  I neither cited my faith in political arguments (ahem, liberation theology) nor expected others to understand it.  This worked, to a degree.  I always felt mainstream feminist bloggers, writers, pundits, and media used the extreme examples of conservative Christianity, usually involving the heads of leadership, to illustrate their political points and often to shame the GOP.  This tactic works to rally the feminist base, but it has serious consequences. It suffocates those of us who exist in the hybridity of organized religion and spiritual homesteading. Hybridity is my home.  My racial and cultural identities are hybrids. Why should my faith not follow suit?

I figured it was easier to allow the assumptions, rather than confront them until a fellow activist asserted, “If you identify as a Catholic, I consider you complicit and an accessory to the Catholic Church’s sexual abuse cover-up and scandal.”

It seemed like an absurd, sweeping statement and I thought, certainly someone else will speak up against that ridiculous statement.  That statement not only went unchallenged, but was enthusiastically embraced by others.  I was stunned.

I wrote to the activist and explained the harm that kind of statement can make, along the following lines:

There are two branches to most governing bodies: the hierarchical leadership that dictates the rules, doctrines, and dogma, and the reality of the people. There are laws and bylaws, and then there is the lived reality of those laws and bylaws. The conflation of an institution with its members is an outdated and dangerous assumption. Do we conflate all practicing Jews or Muslims?  Do we really stand as the “United” States and applaud all things Obama – or any elected politician – asserts, given the nation’s imperialistic history and tendencies?  Do you renounce your citizenship because the taxes you pay fuel the drones in wars we don’t want?  Is it better to walk away or do something, anything, to transform the practice you find oppressive?

I get it. I know how oppressive the Catholic Church is and can be.  Whether it’s the sexual abuse scandal, the Church’s refusal to more deeply consider contemporary scholarship, the priesthood, or its teaching on anything related to gender or sexuality, the evidence is overwhelming: the highest levels of church leadership and its doctrines perpetuate much oppression and suffering among the very people they claim to serve.  Or, as Filipina theologian Rachel Bundang writes,

For all of its fault and limitation, though, the Catholic theological, verbal, and spiritual idiom has made itself at home deep within me; maddening as it is sometimes, in its obstinacies and inconsistencies, I respect tradition even as I contest it, disagree with it, and subject it to critique.  Faith and theology aside, Catholicism’ cultural significance and its ties to who I am as a Filipina are thick as blood itself.  My experience of the Church cannot be encapsulated in a single sticking point and is greater than one sole controversy. (Rachel A Bundang, “This is Not Your Mother’s Church” in Pinay Power)

My reasoning only further enraged this activist, who dismissed my interfaith organizing as futile, citing my Filipino identity as a likely determinant of a cultural and parental loyalty that chained me to my faith.  Or, in other words, I was labeled a baby because I refused to leave my struggle as a feminist Catholic of color working in the name of radical liberation of all persons.  While the “social justice” environment grew exceedingly hostile and turned into an inferno, I was surprised to find myself flooded with energy.  Angry yes, but energized.

How nuanced is US feminist action and discourse if a feminist of color is rejected because of her political and religious hybridity? I have often wondered why my choice to stay in a struggle, to continue in a resistant movement for Catholics, strikes fear and hate in the hearts of so many.  I fail to comprehend how my reasoning and contentious desire to stay, to instill change from within the walls of an oppressive institution, taints liberation’s agendas?  Or, as Filipina feminist theologian Rachel Bundang writes, “I…see Allan Figueroa Deck’s characterization of Latino theology as similar to my own…Among Latinos the unity of the Church does not revolve around the resolution of differences of creed or doctrine. …The commitments out of which they write and teach is not so much the confessional, doctrinal faith-stance typical of mainline religion as much as the cultural and social class commitment of their communities, their gente, their pueblos.”

My commitment is to my community, my gente, my pueblo.  This incorporates all refracting lights and influences in my life – writers, poets, mothers, ministers, pinays, GLBTQI persons of every kind of creed and background. This includes Catholics.  In my refusal to walk away from them, why am I finding feminists and activists walking away from me? 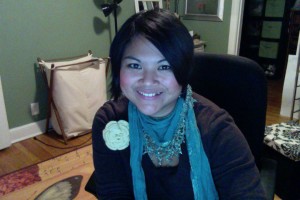 Lisa Factora-Borchers is a creative non-fiction writer currently living in Cleveland, Ohio. Lisa received her BA in English from Xavier University and a joint masters degree in Counseling Psychology and Pastoral Ministry from Boston College.   After a transformative experience working as an assistant editor at make/shift magazine where she learned about editing as an act of radical love, she is now the editor of the forthcoming anthology, “Dear Sister: Letters to Survivors of Sexual Violence” (January 2014, AK Press).   She is currently working on a memoir that will crack open new spaces within feminisms, spirituality, and the US Catholic Church.