I came into feminism as a butch Latina lesbian at a women’s college. Today I stand as a brown queer trans masculine person who moves through the world read as a cis brown man. I have often felt like my place in feminism has not always been welcomed, thought it has always been an integral part of my identity.

I came into my feminism hearing brown queer woman tell stories of their struggles for respect and recognition from men, from white folks and from the institutions they had to navigate daily. I come from a community where people steel stories from their hips.

I have learned along my path that we hold stories in our bodies. People think they can read my experience, who I am and where I am from. What my politics are. I often feel those stories are hidden in my body. Along with the struggles, trauma and resilience of my ancestors. My path to liberation must include telling these stories, working through trauma and confronting internalized oppression.

For the longest time I retreated to my masculinity, the misogyny I learned to “protect it” and the inherit homophobia that came with it. For fear of violence done unto my body because it was different. I would perpetuate the patriarchy, particularly around other men or masculine folks of color for fear of being seen as inauthentic. Convinced that if another brown man saw me with my masculine partner would confront me for being gay, find out I was trans and assault me. I grew up with the victim blaming narrative around rape culture and the fear of violence was my rationalization for perpetuating these systems of oppression.

How does one confront these issues? How does one shift to become an ally to the communities to which their non-complaisance becomes oppressive? These were questions that I struggled with constantly. Playing out my internalized sexism on people that I cared about all for the sake of being “man enough.” It was always important for me to “remember where I came from” but was still struggling to tell the stories of my “old self” and feel comfortable in the body I was given.

But it wasn’t until I participated in the Brown Boi Project that I was able to start having these conversations with myself. The Brown Boi Project is a leadership development and organizing project working to build the leadership, economic self sufficiency, and health of young masculine of center womyn, trans men, and straight men of color–pipelining them into the social justice movement. It was then for the first time I had met other masculine folks of color talking about these issues, wanting to breakdown oppressive masculinity and redefining it to be inclusive and affirmative of feminine identified folks. It wasn’t until then I was able to have conversations with people who looked like me to hold me accountable, to be able to better hear my partner’s concerns as a femme identified person, to be able to be critical of my own internalized sexism. It became apparent that my responsibility as a masculine person is to dismantle sexism and patriarchy and that it’s not the job of women and feminine identified folks.

It was then I realized what was needed to shift. I needed community.

I have been struggling with having conversations about white folks around institutionalized oppression and what I call “subtle racism.” The idea that white folks don’t have to call me the n-word to perpetuate racism in my life. Its the erasure of voices of color, its the apathy around cultural appropriation, its the cries of reverse-racism that really hit the hardest for me. I have been in this constant back and forth of what racism is and isn’t, what I should be offended by and what I should not, what I am “allowed to be angry about” and can’t I cannot. Seeing white folks try to prove to me that they get it, but by inserting their voice they ultimately silence mine. After many feelings of frustration and anger, I stepped backed and asked myself, why aren’t white folks calling each other out on this? As a masculine person I know it’s my responsibility to call out other masculine folks when they are perpetuating misogyny, so why are white folks doing the same?

I simply decided to be direct with the white folks in my life and asked, “Do you feel like you have the knowledge/skill set/ability to call out other white folks on racism/institutionalized oppression/white supremacy?” The majority of the responses I got were “no.” Most folks said they might have the knowledge but not the ability. The majority of these folks where also queer and feminist identified. I had seen them call out others on sexism and homophobia, but why not racism?

Some folks explained that they had called out folks before and have been ostracized from friends, other white folks they talked to were just not receptive, they only had luck talking about racism if it was defined as “prejudice against someone of a different race” (leaving space for the reverse-racism argument). It was then I realized that these folks don’t have community. They do not have other white people in their life to hold them and their friends accountable. They don’t even have the space to talk about race in their white friend circles. There are folks who want to do the work but don’t have community to hold them through the process.

In my advocacy work I have learned we can’t just tell me they have privilege and to change. People have to move through their feelings, be critical and have a willingness to feel supported in a shift. People need community to move and shift ideas for themselves to inter effect the collective consciousness. But learning this ultimately just left me with more questions than answers. Why is it so hard for white folks to build community to do these things? Why are all these white feminist groups reluctant to use an intersectional approach, but chastise others if they do not have a feminist framework? Why are these groups so quick to say, “We are all the same” but constantly make me feel othered when sharing space?

I found myself asking “what do I have to do to help white folks build community to hold each other accountable around race?” When I realized that that is in fact, not my job. Just as it is my responsibility as a masculine person to dismantle sexism, it is white folks responsibility to dismantle racism. That is the question I pose to white feminists: how can you create communities of accountability? How can you start conversations about race/institutionalized oppression/white supremacy whiteout people shutting down? 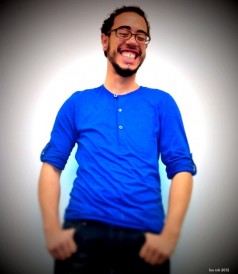 Qui Alexander is queer, Black Latino facilitator/trainer, consultant, organizer and yoga teacher based in Philadelphia. Self described as a laugh loving, shape shifting, and nerdy ball of fire, who got into yoga, wellness and social justice, all by accident. A graduated of Bryn Mawr College, started advocacy work during his undergraduate career and continues to do that work in a variety of ways. Qui’s current favorite work is with the Attic Youth Center and the Brown Boi Project. He is committed to teaching yoga to queer, trans and poc communities and volunteers at the local community acupuncture clinic.

Qui has years of LGBTQ advocacy experience and uses his background in facilitation to hold and make space for folks in different capacities. His passions for social justice, self and collective care show up in his work with queer youth, community organizing and consulting work. Whether he is facilitating trainings, writing curriculum or teaching yoga, he strives to make spaces that affirm identities and opens people up to the deeper places learning can take them. He works to inspire folks to embrace change in all parts of their lives. Qui considers yoga a part of his work and home life and self-identifies as both a yoga dork and the target audience for cheesy family tv.