The Politics of Reading: A Love Note for Stephen Ray – The Feminist Wire

Home / Academia / The Politics of Reading: A Love Note for Stephen Ray

The Politics of Reading: A Love Note for Stephen Ray

I was weeping in the parking lot. The required seminar in the Ivy League graduate program had just let out for the evening, and I managed to leave the building before losing my composure.

We met each week to discuss the classic texts in our field. Roughly one dozen people. Approximately the same number of students and professors. Predominantly male. Almost exclusively white.

Here, we were ritually, informally, and subtly indoctrinated into the sexism of the academy. We read books written by men, in a room filled with men, with portraits of men hanging on the walls. There were marble busts of men in the corners. The few women present sat forward on their chairs—alert, attentive. The men in the room leaned back— relaxed. When a man spoke, people listened. When a woman spoke, she had roughly even chances of being heard. Half of the time, the conversation would continue over her, regardless of her volume or assertiveness. Half of the time, men in the room stopped speaking to hear her words. When she made a good point, it was often attributed to the man sitting next to her.

In this seminar, we (and by we I mean the female students) learned that, even if we passed every test, we would still fail. Even if we earned our degrees, were hired at prestigious schools, published books, and got tenure, we were likely to be ignored by the male establishment.

Some nights were worse than others. It was bad when the female professors stopped referring to their colleagues by first name and regressed to calling them “Professor.”

The women tended to bring the book assigned for that meeting to class. The men, however, brought more—every book on their shelves written by the author, secondary sources, tangential resources to be dropped into the discussion. In front of each man, there was a stack of books, varying in height. In retrospect, it’s humorous.

I had studied feminism with incredible teachers—Carol Stoneburner, Letty Russell, Margaret Farley, Serene Jones. I had read Luce Irigaray, so I recognized that this seminar was training me in a particular, singular way of knowing in which women function as a necessary reflective “other” to men. I had read Gayatri Spivak and understood how knowledge was being produced at the center of the metropole. I had read bell hooks and could apply her incisive critique of politics in the classroom. And yet understanding what was happening did not take away the pain that resulted. My analysis likely lessened the effects of the indoctrination, but regardless, the whole thing hurt like hell.

So I wept in the parking lot. Stephen Ray saw me. He was another graduate student, a few years ahead of me in the program. He stopped on the way to his car and asked, “Are you okay?”Stephen had a family and a real job. He was the only African-American man in our graduate program. These facts, along with his general kindness, meant that he felt safe to me. He, too, differed from the norm into which we were being disciplined. I let my defenses down and explained why I hated the seminar. That night, Stephen offered a kind word and a listening ear. In the coming months, he did much more.

In every following seminar, Stephen referenced a female scholar whose work related to the topic we were discussing. Sometimes, his comments shifted the direction of conversation. Other times his remarks were ignored. For me, the reaction did not matter. Stephen persistently affirmed an alternative reality, in which women’s voices could be heard and valued.

I confess: It took me a few weeks to realize that all the female scholars he cited were African- American. Now, I had been taught well. The professors who introduced me to feminism never analyzed gender without considering race and class. The Feminine Mystique was not assigned but rather briefly mentioned in preparation for Feminist Theory: From Margin to Center. I had learned to recognize the interlocking systems of oppression that privilege few at the expense of many— including racism, sexism, classism, and heterosexism—and to name the structure patriarchy. Yet in that dreaded seminar, I was so eager to hear a scholar mentioned who was like me that it took me a minute to appreciate that these women were different from me and from one another.

Stephen’s actions helped me to understand more fully the ways in which sexism and racism are intertwined. He helped me realize that women were not the only ones whose voices where not heard in that seminar. He taught me to listen for silences.

I had to take that damn seminar every year in graduate school. Over the years, generations of female students and professors experimented with various means of rebellion. We invited more women. We strategized who would talk about what. We brought food and wine. We shook baby rattles in the corners and danced on the tables in hopes of exorcising the entrenched patterns of patriarchy.

In my estimation, Stephen’s intervention worked best. And it leaves me with an incredibly potent question: whom are you choosing to learn from? Or, stated differently: what have you been reading?

Stephen Ray is now the Neal F. and Ila A. Fisher Professor of Systematic Theology at Garrett- Evangelical Theological Seminary. I am a Professor of Theology at Louisville Presbyterian Theological Seminary where I teach in the Black Church Studies Program Stephen helped initiate. And every time I craft a syllabus, I remember that night in the parking lot and Stephen’s incredible response. 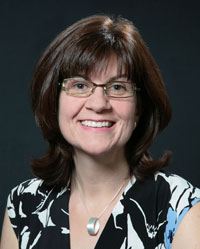 Shannon Craigo-Snell is Professor of Theology at Louisville Presbyterian Theological Seminary. She is the author of two books, Silence, Love, and Death: Saying “Yes” to God in the Theology of Karl Rahner, and Living Christianity: A Pastoral Theology for Today (coauthored with Shawnthea Monroe). In addition, she has published numerous essays on feminist theology and performance.