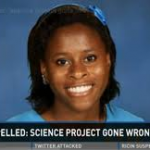 High stakes test question: A female science student conducts an experiment with chemicals that explodes in a classroom, causes no damage and no injuries.  Who gets to be the adventurous teenage genius mad scientist and who gets to be the criminal led away in handcuffs facing two felonies to juvenile hall? If you’re a white girl check Box A, if you’re an intellectually curious black girl with good grades check Box B.

When 16 year-old Kiera Wilmot was arrested and expelled from Bartow high school in Florida for a science experiment gone awry it exemplified a long American-as-apple pie tradition of criminalizing black girls.  In many American classrooms black children are treated like ticking time bomb savages, shoved into special education classes, disproportionately suspended and expelled–then warehoused in opportunity schools, juvenile jails and adult prisons.  Yet, while national discourse on the connection between school discipline and mass incarceration typically focuses on black males, black girls are suspended more than boys of every other ethnicity (except black males).  At a Georgia elementary school in 2012 a six year-old African American girl was handcuffed by the police after throwing a tantrum in the principal’s office.[i]  Handcuffing disruptive black elementary school students is not uncommon.  It is perhaps the most extreme example of black children’s initiation into what has been characterized as the school-to-prison pipeline, or, more accurately, the cradle to grave pipeline.  Stereotypes about dysfunctional violent black children ensure that the myth of white children’s relative innocence is preserved.

Nationwide, black children spend more time in the dean’s office, more time being opportunity transferred to other campuses and more time cycling in and out of juvenile detention facilities than children of other ethnicities.  Conservatives love to attribute this to poverty, broken homes, and the kind of Bell Curve dysfunction that demonizes “welfare queens” who pop out too many babies.  Yet there is no compelling evidence that socioeconomic differences play a decisive role in these disparities.[ii]  The fact remains that black children are criminalized by racist discipline policies regardless of whether they’re privileged “Cosby kids” or are in foster care or homeless shelters.  According to Daniel Losen and Russell Skiba, authors of the Southern Poverty Law Center’s “Suspended Education” report, “ethnic and racial disproportionality in discipline persists even when poverty and other demographic factors are controlled.[iii]

National research such as the Southern Poverty Law Center’s study and the Indiana Education Policy Center’s 2000 “The Color of Discipline” report has consistently shown that black students do not, in fact, “offend” at higher rates than their white and Latino counterparts.[iv] Middle class African American students in higher income schools are also disproportionately suspended.  This implies that black students are perceived by adults as more viscerally threatening.  “The Color of Discipline” report found that black students were more likely to be referred out of class for lower level offenses such as excessive noise, disrespect, loitering and “threat.”[v]  According to the Southern Poverty Law Center, “race and gender disparities in suspension were due not to differences in administrative disposition but to differences in the rate of initial referral of black and white students.”

When it comes to black girls, the widespread perception that they are dangerous, hostile and ineducable is promoted and reinforced by mainstream media portrayals.  Historically, black women have never been regarded as anybody’s “fairer sex” because white women have always been the universal standard for femininity, humanity, and moral worth.  On contemporary TV and in film, heroic white women abound as “new” models of bold, adventurous, breakthrough femininity.  Writing on “women’s” TV portrayals recently in the L.A. Times, Mary McNamara gushed about how the current crop of small screen female protagonists were complexly layered, daring departures from the typical crone, slut and mother roles of the past.  According to McNamara, “TV’s female leads are breaking ground with their unexpected choices. Thanks to the feminist revolution and TV’s increasing ascendancy, women are allowed to make mistakes without paying the ultimate price. It’s all quite refreshing.”

Yet, once again, the “feminist revolution” is lily white and over-exposed.  McNamara hails characters from “House of Cards,” HBO’s swaggering white-fest “Girls” and “Homeland,” then blithely acknowledges that the female protagonists of these shows are all white and mostly middle class.  Previous pieces from both the L.A. Times and the New York Times have saluted the rise of ass-kicking female adventurers like those in the “Hunger Games,” “Zero Dark Thirty” and (even) Pixar’s animated movie “Brave,” as evidence that Hollywood is becoming more receptive to strong independent female characters.

But back in the image ghetto, substantive, much less starring roles, for women of color are still less abundant than Aunt Jemima’s head scarf.  The endless parade of reality show swill featuring hyper-sexual “out of control” brawling black women has long dwarfed dramatic mainstream portrayals of black women’s lived experiences, ambitions and narratives.

Thus, Kiera Wilmot’s arrest and expulsion is a national travesty.  It is an indictment on not only the inveterate racism and sexism of American public education, but on an image industry that still loves to see black women doing mammy, Jezebel and welfare queen to white women’s heroic explorers.

Sikivu Hutchinson is the author of Moral Combat: Black Atheists, Gender Politics and the Values Wars and Godless Americana: Race and Religious Rebels.

[ii] See Daniel J. Losen and Russell J. Skiba, “Suspended Education: Urban Middle Schools in Crisis,” Southern Poverty Law Center, 2010, p. 8.  “If we assume that Black and Hispanic poverty rates are similar in these districts (as they are nationally) and if we assume that Black males and females have similar exposure to poverty it becomes difficult to explain why suspension rates are so much higher for Black males than for both Hispanic males and Black females.” Losen and Skiba cite previous research that has not identified a link between socioeconomic background or poverty and high rates of suspension (e.g., Skiba, 2002, Wallace 2009, APA 2008).

[iv] Ibid. pp. 3-6.  Losen and Skiba report that there has been a 9 point increase in black suspensions from 1973 to the present, such that “Blacks are now more than three times more likely to be suspended than whites.”  Based on data from 18 districts nationwide they also concluded that white females were the least likely to be suspended and black males the most likely out of all racial and ethnic groups. See also, Russell J. Skiba, et al. “The Color of Discipline: Sources of Racial and Gender Disproportionality in School Punishment,” Indiana Education Policy Center, Policy Research Report: SR1, June 2000, pp. 1-26.