You might already know that a series of racist behaviors toward Black people recently brought national attention to University of California, Irvine’s (UCI) campus. A recent video by Lambda Theta Delta (LTD), UCI’s oldest Asian American interest fraternity, showed its members participating in a party involving racist blackface. The video was used for rush recruitment, briefly introducing the fraternity to people the fraternity wanted to impress.

It was a little over a week ago that Black Student Union (BSU) co-presidents Ainaria Johnson and Kala Lacy, saw the video. Within a few hours, they responded by gathering a group of 60 students from the Cross Cultural Center and by organizing a spontaneous protest that disrupted a meeting where the fraternity was present with the chants “While there is racism, we will not rest!”

Indeed, given LTD’s track record alone, it is difficult not to blame the organization, let alone campus Greek culture in general. That subculture is simply one of several bastions of a certain kind of racism called antiblack racism.

LTD apparently feels okay enough about the blackface thing that they’ve now been caught doing it on video twice (and who knows how many times they have not been caught). The fraternity’s apologies claim the frat’s ignorance about how offensive blackface is. But, as Arturo Garcia of Racialicious pointed out, this seems really disingenuous. At some point, a half-assed, weak disclaimer was added to the video, reading, “Disclaimer: No racism intended.” What the disclaimer shows, of course, is that somebody affiliated with the fraternity knew that LTD’s practices could be perceived as racist, and used it to recruit people anyway. And it appears that LTD learned so little about blackface that their UCI chapter president Darius Obana actually said that the earlier blackface incident was “the equivalent to a female powdering her face to go [to a party] as Snow White.”

This is a good example of how people need not be accountable to Black people in an antiblack world. The comparison of blackface to Snow White might be a product of ignorance on Obana’s part, but it is an ignorance that he gets away with on an antiblack campus because he can. Obana’s ignorance of Black history won’t hurt him any. But it will hurt those Black people with whom he comes in contact. I talked with a former Pi Beta Phi member and UCI alum, here we will call her Shana, who doesn’t buy the ignorance excuse. “Nobody is that ignorant. They just don’t care.”

Shana has seen a lot of campus Greek culture, and says that the use of racist epithets is “very common” and racism is “constant.” As the only Black member of her chapter, she tells of one of her sorority sisters admiring her “nigger lips. “When she demanded the issue be made right, the sorority told her not to be so “sensitive” about it and successfully pressured her not to take her complaint any further. In a particularly grotesque incident, Shana mentions that during her pregnancy, people in an anonymous chat room frequented by members of the campus Greek community “would say these awful things about me, like ‘Somebody stick that bitch with a coat hanger’ or ‘Someone go push her down some stairs [to abort the baby]’ or ‘She’s black so she’s gonna have like 7 kids by the time she’s 25.’”

Yet, even as Shana has seen the depths of antiblack racism among campus Greek culture, she supports and agrees with with the BSU in saying that the real issue is that antiblack racism pervades campus environments, like UCI and far beyond. “I don’t think it’s that we eradicate this fraternity and this blackface video and things will automatically be safe for black people.” 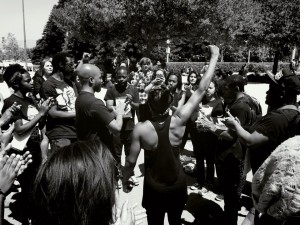 In response to recent racist activities, the BSU has been organizing several protest

activities, with more to come. In addition to a silent protest last Friday, April 26, and a bigger rally this past Wednesday, May 1, the BSU’s All Black Everything campaign invites Black people to share pictures of themselves describing encounters with antiblack racism, and use social media to post these pictures in order to begin a discussion about antiblackness in college and beyond. Several Black students, including myself, have also organized a nationwide telephone campaign TODAY, Friday May 3, to call Chancellor Michael Drake (949 824-5111) and the Office of Student Affairs (949 824-4804), TODAY, Friday May 3, and tell them “I support the Black Student Union’s demands!”

Last Wednesday night, LTD said they would remove themselves from campus affairs until Fall 2014. Some would probably like to call this a victory for the Black students or at least a removal of their reason for protesting. But, in fact, this changed nothing.  LTD’s self removal does little to address systemic and pervasive antiblack racism at UCI and beyond.  In fact, self removal takes the onus of addressing on campus antiblack racism off of LTD and places it  in nowhere land–where it’s too big to reduce to a particular organization, practice, or even campus–where it doesn’t get resolved.

“Now It Is Time To Try Ours”

However, the BSU demands tackle a bigger problem than repeated blackface performances by a fraternity. Notice how the first demand is for new policy, and the second is to raise African American Studies from a program to a fully funded department. These are active steps. Rather than waiting on the racists to act, and then waiting on the administration to do something to protect Black students—something that even students who caucus with the administration concede does not work–this approach seems to recognize antiblack racism as a unique part of the structural environment of the campus. The demands seek institutional measures (a new policy, a new department) to counteract antiblack racism, and they don’t see racism as a simple one-on-one act of prejudice or something that affects all people of color in the same way.

The third and fourth demands should already be enforced, but apparently have not been. Instead, it seems that the UCI administration has acted toward BSU leaders in a way similar to how Pi Beta Phi acted toward Shana. For example, In 2011, the UCI administration allowed Pippin Commons (an undergraduate dorm) to host a chicken and waffles dinner “in honor of” Martin Luther King, Jr. Johnson and Lacy say that when the BSU attempted to follow the procedures for getting the organizers disciplined, the university told the BSU leaders to let things go so that they didn’t bring “negative” attention to the campus. 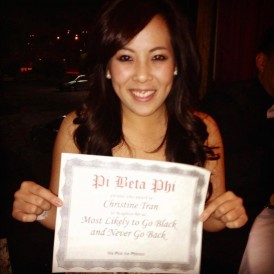 Among other contributors to this antiblack campus culture are Pi Beta Phi, whose members issued a “Most Likely to Go Black and Never Go Back” award, Alpha Phi, and Phi Psi, some of whose members were designated “big slave driver” and “little slave” on a paddle colored like the US flag. And, of course, within the University of California system, fraternities and sororities have a long history of involvement in “ghetto fabulous” parties, including most recently the notorious “Compton Cookout” at UC, San Diego.

For many of the 700 Black students at UCI (out of 37,000), the experience of college means learning to live with things like these: 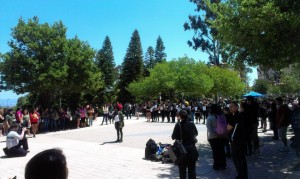 These things did not all happen at Greek parties; some were part of the ordinary activities of student life—catching the bus, asking questions in class, going to the grocery store. Hostility against Black students and Black people in general is simply too pervasive not to be addressed in its own right. It’s not just this frat, and it’s not even just this school. It really is everywhere you can look–from the ways Black staff get treated to the books students read to the behaviors of teaching/research assistants and faculty. The total environment is so thoroughly pervaded with antiblackness that the problem simply cannot be framed in a piecemeal, case-by-case basis as current policy prescribes. So, even with LTD (voluntarily) off campus for the next year, there are already plenty of other incidents, individuals, and institutions that are nodes of antiblack racism at UCI that need to be addressed.

Where do you begin to address a problem of antiblack racism that impinges on the most basic aspects of Black students’ university life? For starters, you don’t let a fraternity “punishing” itself, or a university that tries to silence Black demands, hold you back from doing what you know needs doing. “We have tried their way,” says Johnson. “Now it is time to try ours.”