Django in Philly – The Feminist Wire

On my last New Year’s Day in Philadelphia, I did what I always do on New Year’s Day in Philadelphia: I watched the Mummers Parade.  For those of you who didn’t grow up in the Delaware Valley region, the Mummers Parade is a 112-year-old parade featuring clowns, floats, and perhaps most famously, string bands wearing suits of glitter, sequins, and ostrich feathers.  It is a celebration of the city and its residents; all the Mummers are local working-class people: plumbers, carpenters, administrative assistants, and the like. They spend eleven months out of the year sewing costumes, building sets, and rehearsing choreography all for the first day of the year when they are stars. 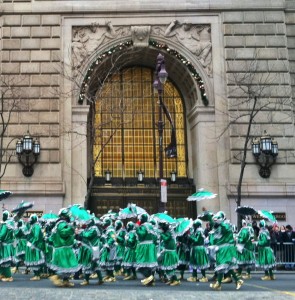 But beyond the fanfare, like many other Philadelphia traditions, the Mummers Parade is also known for its lean towards both subtle and blatant insensitivity. Blackface performances lasted until the 1960s, exclusion of women and African Americans lasted well into the 1980s, and in the last 25 years I have seen string band performances honoring Irish, Mexican, and Native Americans with leaping leprechauns, shooting sombreros, and whooping war paint.

This year they honored minstrel shows.

The performers didn’t wear blackface, but instead wore face paint of red and gold.  White paint was smeared across their mouths and jaws to create the illusion of a big wide smile, a smile echoed in the signs and floats behind the banjo players and saxophonists.  There was a little tap dance, a little jazz hands, and it all started with “Gentlemen, be seated.”

I did not sit down.  I stood in front of the television with a face as silent as the signs in the background of the band; I definitely didn’t have a smile.  I was of two minds.  I kept thinking how, in eleven months of rehearsals, did no one see this as potentially offensive?  Or perhaps I was being too sensitive?  I have taught minstrel shows as part of African American comedy; I always must remind my students that, as demeaning as these shows were, they not only showcased multitalented performers but also influenced American entertainment even into the age of modern television.  Weren’t the Mummers celebrating the same?  At the time, I was unsure how I felt about seeing the minstrel show pushed back into the realm of pure entertainment.  Of course, the night before I had also viewed Django Unchained.

Django Unchained, the story of a former slave (Jamie Foxx) who becomes the apprentice of a bounty hunter (Christopher Waltz) in order to free his wife Broomhilda (Kerry Washington) from her wicked owner (Leonardo DiCaprio), is one of those films that becomes controversial simply for its premise.  Since its release in December of 2012, critics have had time to condemn, praise, butt heads, and debate wildly on the film’s historical inaccuracy and possibly degrading tones.  I am not a historian, but I am a fan of Quentin Tarantino.  A critical fan of Tarantino: I don’t like everything he does, but I’m always excited to see it.  When I heard his next movie was not just a spaghetti western, but one with an African American lead, my interest was piqued.  When I heard the movie would not just involve slavery, but that slavery would play an intricate part of the film, I had my doubts, the same doubts expressed by Spike Lee in his now famous December 22, 2012 Tweet:

AMERICAN SLAVERY WAS NOT A SERGIO LEONE SPAGHETTI WESTERN.IT WAS A HOLOCAUST.MY ANCESTORS ARE SLAVES.STOLEN FROM AFRICA.I WILL HONOR THEM.

I had no intention of dishonoring my ancestors or the Holocaust they endured.  I had, however, seen Tarantino’s Inglourious Basterds, a film that uses the Jewish Holocaust to create a World War II revenge film.  I figured Django Unchained would follow a similar format: one chapter to make the audience gasp at the horrors of history followed by four chapters appealing to a less-than-evolved need for revenge. It is a format that attempts, in Tarantino’s words, to show “it’s the power of the cinema that fights the Nazis.”[1]  Unfortunately, it’s also a format that shamelessly turns Holocaust survivors into mass-murdering sociopaths utilizing the same techniques as their original tormentors. 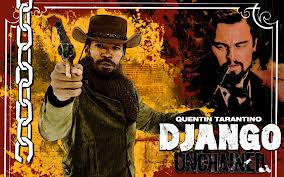 Perhaps it is a newfound sensitivity that leads Tarantino to all but abandon this chapter format for Django Unchained. For better or for worse, Inglourious Basterds attempts to offer a transition from the dramatization of historical genocide to the popcorn and soda of “Killin’ Nazis.” Django Unchained, however, offers no such transition. The audience is constantly bombarded with images of black bodies scarred with whip lashings, burned from prolonged bondage, and harnessed in headgear not even fit for beasts. Such visuals usually appear more in history books than mainstream films, so as uncomfortable as they are to see, they are also welcomed. Again, in my teaching experience, most students will agree slavery was bad, but if asked why slavery was so bad, most are ignorant to the details.  The film itself seems to acknowledge this ignorance.  Tarantino, speaking to the audience after the first U.K. showing, stated his purpose of the film is in part to “break that history-under-glass aspect, I wanted to throw a rock through that glass and shatter it for all times, and take you into it.”[2]

This is where the film hits a snag. Tarantino is a highly stylized director and his films create a stylized world, a Taratinoverse as it is sometimes referenced on the Internet: a world filled with super assassins, dancing gangsters, and souls that are carried in briefcases. It is a world where violence borders between gruesome and cartoonish. But how does this world speak to history? When key story details such as six-shooter shootouts, “Wanted: Dead or Alive” posters, and organized Mandingo fights are more prevalent in Hollywood movies than historical evidence, the line between fact and fiction becomes blurred and it becomes the viewer’s job to distinguish between the extremes of cinema and the extremes of slavery. Tarantino openly claims, “however bad things get in the movie, a lot worse shit actually happened,” but this is the same director who ended War World II by gunning down Hitler in a movie theatre. How do we know he didn’t make this whole slavery thing up?

Django Unchained is a film of missed opportunities. It is a spaghetti western with more shock than grit. It is a love story between a man and woman with almost no interaction between said man and said woman. (Said woman barely has any lines; perhaps the high-paced dialogue of ABC’s Scandal has Kerry Washington all talked out).  And it is a commentary on slavery that underutilizes Tarantino’s ultimate secret weapon:  Samuel L Jackson.

Django Unchained is filled with good acting. Waltz plays a killer with an overwhelming respect for life. DiCaprio plays a slave owner who is more spoiled child than plantation lord. And of course, Foxx plays a title character who goes from being uncomfortable sharing a drink with a white man to being able to control the room. Even Washington uses her limited screen time to elicit from the audience genuine empathy and fear. But it is Samuel L. Jackson, the man whose final monologue solidified Pulp Fiction as the coolest film of its decade (racism, sexism, and homophobia aside), who really shines through. He plays “Stephen,” presumably the oldest slave on DiCaprio’s plantation.  Introduced by DiCaprio as “ornery,” Stephen is an instant foil to Django.  On the surface, he is a yes-man, a head servant, but through Jackson’s subtleties, we come to realize it is Stephen who is truly running the house. It is Stephen who keeps the kitchen functioning, it is Stephen who sees through every ruse, and ultimately, when things go sour for the protagonist, it is Stephen who orchestrates the punishment. In an audience of all races, an audience that carelessly laughed at offensive moments like the big black woman running for her life, Jackson’s “Stephen” is immediately recognized as the Uncle Rukus, the Uncle Tom, the true villain of the film. 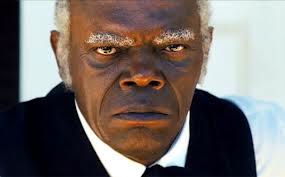 In this role, Jackson portrays Stephen with just the hint of tragedy. Stephen is a character who can’t let Django win because this is America and black people don’t have happy endings.

Jackson portrays the true tragedy of slavery: it is not a time period or a physical act but a mentality that we as Americans inherit, assume, and at times even defend to our own detriment. We can recognize Stephen because we can relate to Stephen. Because sometimes we are Stephen.

Django Unchained captures a moment in history.  It is not two years before the Civil War as the opening of the film suggests, but a strange moment in the 21st century where, on one hand, we have an African American family in the White House and, on the other, we have a disparity in education that by some estimates puts black children almost 200 years behind their white counterparts. It is a time when we obviously want to begin rehabilitating ourselves from our past, break these cycles of racism, but still find ourselves in too much pain to do so. As evident from the controversy Django Unchained enflamed across the nation, as evident from the controversy the Mummers Parade enflamed across the city, we cannot turn to entertainment alone.

Django Unchained, like the minstrel show, needs to be viewed in both historical and contemporary context. While the minstrel show may have contained talented performances, while performers like Bert Williams pushed the genre to make commentary within the comedy, at the end of the day it is entertainment based on the pain and suffering of oppressed people. It is always pain, no matter how big you paint the smile. 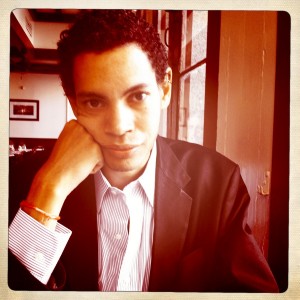 Quincy Scott Jones’ work has appeared in such anthologies as Heroics: Strange Tales of Absurd Superheroes, From Where We Sit: Black Writers Write Black Youth and Let Loose on the World: Celebrating Amiri Baraka at 75.  He is involved with Arcadia University’s Undergraduate Creative Writing Concentration and M.F.A. program. With Nina Sharma Jones he co-created the Nor’easter Exchange:  a multicultural, multi-city reading series.  His first book, The T-Bone Series, was published by Whirlwind Press in 2009.