Drunk On A Plane: Or, Why I Loved “Flight” – The Feminist Wire

Drunk On A Plane: Or, Why I Loved “Flight”

Almost a decade ago, I eagerly awaited the release of Clint Eastwood’s Million Dollar Baby, thinking it was a boxing movie. It wasn’t, really—any more than Flight is a movie about flying. Yet both films are very much about gravity: the histories, behaviors, demons, dreams, and failures—technical and otherwise—that can pull people fast, flat, and hard to the earth’s surface and wreck them. 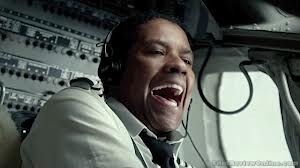 In Flight, we watch Denzel Washington inhabit—to his seemingly drunken marrow—the character of Whip Whitaker, a cocksure, skilled, divorced, alcoholic pilot and failed father. Nominated for an Academy Award as Best Actor for his performance, Washington is so good in this role that we only know how good in the final scene, when he’s in prison and, finally, sober. We realize with a frisson of recognition—oh, that’s Denzel, not Whip—that all along he’s only been playacting the drunken pilot. (“Hey, don’t tell me how to lie about my drinking, okay? I know how to lie about my drinking. I’ve been lying about my drinking my whole life.”)

But as good as he is in this role, for me the gorgeous acting (his and the rest of the cast) is not the most interesting thing about the film. I loved the embodiment of Flight, the way that watching it (even on my television screen and not in full cinematic glory) made me feel as if I, too, was going down. And not just strapped into a plane spiraling toward unforgiving ground, but also from a surplus of alcohol, desire, fear, and the rush of life itself. The movie tapped into a sense of danger, a jolt of adrenaline, an exhilarating roller coaster of life out of control that seems very far indeed from my middle-aged, working-mom, recently-remarried, altogether settled, and reasonably happy existence.

And full disclosure here: I hate to fly. I am terrified to fly. I ingest Ativan before I step onto a plane and, if I’m not traveling with my daughters, alcohol during the flight. (Once, I flew in a goldfish-bowl of an R-22 with my then-husband, a helicopter pilot, and I had to take three Ativan before I could even strap myself in. Fortunately, I survived the drugs and the flight.) I always carry talismans when I fly: pictures of my girls, chocolate, memories, hope. I pray to a god I’m not sure I believe in. I’ve been known to grab the arm of the person sitting next to me, even if I don’t know them. 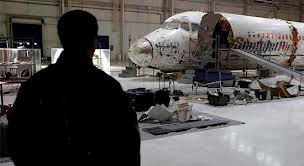 Of course, if I am on a plane that goes down, you damn sure want me in the emergency exit row, because I’ve studied and imagined just about every crash scenario there is, and I will get you out safely. #saveyourlife

Why am I afraid to fly? It’s a control thing. It’s a height thing. It’s a small spaces thing. It’s a Virgo-earthsign-grounded thing. It’s a violent-crashing-to-the-tundra thing. It’s an I’ve-read-every-Wiki-plane-crash-entry thing. For me, flying is trauma in motion (and yes, that will be the title of my book about fear of flying). So it’s saying something, a lot in fact, that I adored a movie about a substance-compromised pilot that features a plane physically shredding apart as it plummets, at one point upside-down, to earth, where it crash-lands after taking out a church steeple. Scorched earth, six souls dead, everybody traumatized. 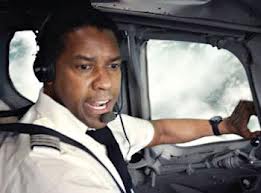 This is the stuff of my nightmares. But wouldn’t psychoanalysts also say, the stuff of my fantasies? Because who doesn’t want a flask of risk, a taste of Whip Whitaker, a hit of adrenaline in her life, a roiling airborne vertigo? And who doesn’t love a good cinematic yarn about addicts who go straight, dads who find their way home (sort of); about survival grasped from the very edge of disaster; about sun-glassed and cocaine-fueled attempts to put one over on the man (in this case, the NTSB); about drunk sex between sexy people and wayward love that won’t ever make it to the finish line; and about epic fucking disaster averted?

So let’s talk about a few more things to love about Flight:

The Performances: Don Cheadle. Melissa Leo. John Goodman. Nadine Velasquez. Tamara Tunie. Brian Geraghty. Bruce Greenwood. This film had some very fine acting. A Bible-quoting co-pilot and his wife. A dealer friend who brings Whip his cigs, cash, and drugs. “Don’t touch the fucking merch,” says Goodman’s character, Harling Mays. The pilot union guy who tries to help Whip sweep his substance use under the carpet. Pitch perfect, all of them.

Kelly Reilly: This woman gets her own category because she is so ridiculously good in the role of Nicole. Lovely, vulnerable, tough, fragile, with that fluttery left eye tic thing she’s got going on. I wanted to protect her, befriend her, slap her, take away all her needles, take her to lunch, be her big sister, and save her from herself. This UK-born actor convinced me that she was southern-accented, drug-hungry, shot-up Nicole. (And where was Ms. Reilly’s nomination for Best Supporting Actress?) 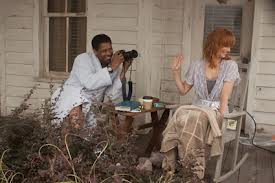 Race: A cast full of actors of color without ever making race a character. Because race was not a character in this movie. Flight, unlike many films released and nominated in 2012, wasn’t about race. It could’ve been about race, but race wasn’t part of this story. Whip is an addict; Nicole is an addict; they get together and have sex. That they are not noticeably of the same race was unremarkable. Don Cheadle as the defense lawyer? Unremarkable. Three women-of-color flight attendants? Unremarkable. Because, kudos to the producers and director and casting agents, this cast actually looked like the people of the United States. A movie not about race or slavery or Lincoln that also just happened to feature a whole bunch of phenomenally talented people of color alongside the usual white folk.

In-Flight Movie:  I can guarantee you that Flight will never be an in-flight movie. This is a good thing, because the nudity, the profanity, and the sheer ass-clenching, wine-swilling terror will not be edited out for tamer purposes. 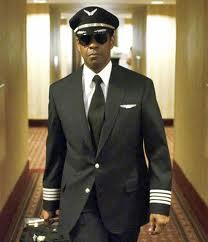 Masculinity: At one point in the film, Whip rants, “Somebody put me in a broken plane.” Yes, Whip, yes they did. But the irony here is that Whip himself is broken, a broken man in a broken plane. This version of masculinity is not, ultimately heroic; it’s redemptive, as Whip finds a different kind of masculinity by film’s end, feeling “free” and embracing sobriety, connecting with his son, and wondering what kind of person (what kind of man) he is and will be. But throughout most of the film, the man is as damaged as the plane—despite the spectacular aerial slam dance Whip puts the plane through on its way down, despite that skill and bravado, despite the saunter and the sex and the hubris.

The Women:  In many (but thankfully not all) disaster and catastrophe movies, the women characters flail around helplessly seeking rescue by the men, who are portrayed as the real action heroes. Not so in Flight (with the exception of one dead, dangling flight attendant whose body keeps being bounced around like a pinball). Here, we see one flight attendant (Katerina) lose her life saving a child (a moment that later sets Whip on a course away from denial), and another (Margaret) strapping herself into the cockpit alongside Whip and his co-pilot to help maneuver the crashing aircraft. Tamara Tunie’s Margaret is a wonder: smart, strong, capable, and professional in spite of her obvious terror. The scene where she and Whip talk at the funeral is stunning, especially that pregnant moment where Margaret—clearly a woman of integrity—decides whether or not to share Whip’s version of the story. 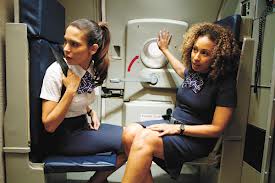 Redemption:  I love the word “redemption.” One might say I’m a sucker for redemption, and if I can be the redeemer, oh how glorious and satisfying is that. People who have fucked up real bad but get to make it right—I love those people. I have been one of those people. I have married some of those people. (Present spouse excluded; he’s a gem.) And I like to see those people onscreen and in the pages of the novels I read. Because redemption reminds us that no matter how severely we send things south, or hurt and emotionally maim those around us, there’s a little light at the end of the tunnel. That light might be on a prison ceiling or in a rehab facility, but it’s still a beacon to a different future.

Denzel: I wrote earlier that the performances aren’t the most interesting thing about the movie for me. But Denzel Washington’s portrayal of Whip is so righteously, tragically, believably good that I want to end with it. In the film, Whip says, “No one could have landed that plane like I did. No one.” And I’m pretty sure that no one else could have played this character but Denzel Washington. Whip Whitaker, like Denzel, is a man for our confused, chaotic times—not the19th century of Lincoln and Jean Valjean, nor the mid-20th century of The Master. 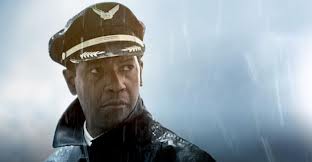 So will he win an Academy Award this year? He’s been nominated six times, and this would be his third Oscar (he won for Training Day and Glory). He’s up against some “stiff” competition in the guy category this year—Bradley Cooper (a lightweight), Hugh Jackman (a singing part), Joaquin Phoenix (too broody), and Daniel Day-Lewis (haven’t seen it yet). All interesting roles, but my money is on the fabulous Mr. Washington.