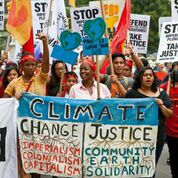 Climate change impacts us all, from the itty-bitty crawler in your garden to the mother in Africa who spends most of her days dangerously trekking for clean water. This forum has concentrated on varying subjects, which shed light on how the climate crisis disproportionately affects Indigenous and Global Southern Women and minorities around the world. The current state of our planet is frightening, and our future is uncertain. The political blockades we are facing make this an uphill battle towards genuine solutions, especially those that cater to interlocking struggles around climate and gender justice.

But let our fears push us into action and motivate us to provide a future of flourishing for all of our earthly kin. Climate change offers us something beautiful: solidarity. Solidarity across arbitrary geopolitical borders, class, race, and gender divisions. The most important thing we can do now is to give this fight our all; to organize, to engage, and to recognize climate change as a feminist and racial justice issue.

Throughout this forum, contributors highlighted intersectional dimensions between the climate crisis and gender and racial injustices. The articles in this forum have shed light on ways in which vegan praxis and ahimsa can be used to challenge neoliberal whiteness; on decolonizing patriarchal frameworks and breaking down anthropocentrism by reclaiming our location in this world in a non-hierarchical fashion; on women’s experiences maneuvering through activist and professional spaces; and the systematic ways in which global institutions fuel mass inequalities. Authors have also looked critically at mainstream ecofeminism and its appropriation of Indigenous environmental knowledges and how capitalism was founded on the subordination of women and nature. 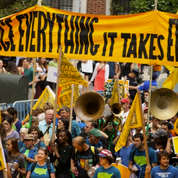 Overall, the contributions contained in this forum emphasize the problematic nature of global capitalism for all living organisms. As citizens, consumers, and members of complex local and global ecosystems, we each have a role to play in working to mitigate the effects of climate change. Our votes, our purchasing choices, and our everyday behaviors (from biking to work to making art) can make a political statement about climate change. Yet, even as those among us of adequate financial means strive to make more responsible choices, we must still acknowledge and identify the inseparable systemic relationship between capitalism and climate change. Doing so will allow us to respond with more effective resistance and action.

Yet worldwide, the economically disadvantaged, people of color, and Indigenous people are further marginalized when they cannot speak through their dollars. They are often seen as part of the problem for not ‘going green,’ despite the fact that they are often the most resilient and sustainable. (Or they are already ‘green,’ and thus vulnerable to cooptation.) Furthermore, as Naomi Klein has stated, “we cannot shop our way out of the climate crisis” as the real, sustainable change needed is much bigger and deeper than changing our light bulbs. 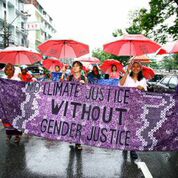 With the historic failure of the 2009 United Nations Climate Change Conference in Copenhagen, the slogan “system change, not climate change” emerged from the international climate justice movement. The slogan confronts neoliberalism’s founding ideology of endless economic growth—achieved by the infinite extraction of finite natural resources—by rendering it dangerously unsustainable and thus systematically flawed.

The bearers of this activist agenda came from a diversity of leftist ideologies; however, there has been an obvious shift in who was at the frontlines spearheading system change. It is largely Indigenous women and women from the Global South who have staunchly taken the lead on changing the message. Although these women are a central symbol of the climate movement today, they have been tirelessly fighting back for much longer. Their messages advocate for decolonization of native peoples’ land, economies, and political and social relations. Their slogans remind us that for a healthy earth, women must have healthy living conditions starting from the land and the environments they rely on for food, water, health, and everyday life.

Activists have taught us to understand links between capitalism and the climate crisis, and we must also stand behind them in fighting for a climate justice that uncompromisingly brings gender and racial justice with it. The conversation does not stop here. Here is a list of some of our own favorite networks, campaigns, and organizations; there are many opportunities to ‘plug in’ and get involved:

Our Land Our Business 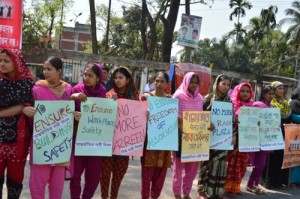 As this forum comes to a close on May Day, we remember the radical labor history of the United States and we celebrate the workers of the world. The Earth Day to May Day convergence, intentionally chosen for this forum, offers an opportunity to expand the scope of our thinking and action about the current ecological crisis. Convergence is an awareness that climate change and capitalism are inextricably linked, as are the struggles for climate justice, social justice and workers’ rights.

Vegan Praxis, Black Lives Matter, and and Water Rationing: A Conversation with Dr. A. Breeze Harper, by Andrea Plaid

A Beginning’s Perspective on Being a Woman in Different Spaces of Environmental Activism, by Georgia Johnson

whosoever has let a minotaur enter them or a sonnet (excerpts), by Emily Carr

How Did This Happen? Capitalism’s Double Subordination of Women and Nature, by Julie Gorecki

Related ItemsClimate Change and Feminist Environmentalisms ForumNaomi Klein
← Previous Story How Did This Happen? Capitalism’s Double Subordination of Women and Nature
Next Story → Thugs R’ Us