I came to an important realization one night. I had long been learning about climate change, the anthropogenic kind that so many of our (purchased) congressmen like to deny. The climate change that is resulting in species and habitat loss. The kind that is disproportionately affecting womxn[1], people of color, and the poor — those least responsible for climate destabilization. The climate change that is driven not only by increasing carbon in our atmosphere, but also by social forces such as patriarchy that alienate womxn’s solutions and voices in official spaces despite their resilience and ability to adapt to changing landscapes and resulting gendered violence. 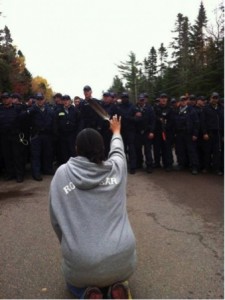 In 2013, Mi’kmaq mother Amanada Polchies made international news when kneeling in front of a line of police, raising a feather in her hand at an anti-fracking barricade in New Brunswick Canada.

I realized this: if we want to combat climate change, our future does not just need to be green. It must also be purple. I believe a step in creating this future is through greater inclusivity of womxn in politics and leadership roles within environmental movements. The impetus and energy behind the current forum, Climate Change and Feminist Environmentalisms, is to bring to the forefront ongoing conversations about issues of climate change and their relatedness to sexism, globalization, and racism. Everything begins with conversation and dialogue, and this is what brings us together here at TFW.

The editors of this forum include Piper Coutinho-Sledge, Alison Criscitiello, Julie Gorecki, Sonalini Sapra, and me. We came together in shared recognition of the urgency of climate change and its disproportional effects on womxn and people of color. We direct a critical lens on the global, patriarchal, for-profit system we live under when discussing climate change. We also highlight the role of powerful womxn who organize to mitigate climate destabilization and the importance of sharing these narratives. From Kern County to Kenya, womxn activists resist exploitation and reclaim their environment.

We have created this space to promote an ongoing constructive discussion on gender, race, and climate change that draws upon theories of intersectionality and feminist environmental justice. We also hope that our readers actively engage with us through dialogue and plug into the fight for climate justice.

In the coming ten days, contributors to this forum will:

We would like to give special thanks to all of our contributors, whose work we greatly appreciate and has exposed us to new understandings of what feminist climate justice is. Thank you for your time and for joining us in this conversation.

Appropriately (and intentionally), this forum begins on Earth Day and runs through May Day. We wish our readers peace and solidarity on this day of celebrating our Mother Earth, which provides and sustains life for myriad beings.

[1] As with the Y in womyn, the X womxn is used to show that womxn around the world are united and rising up to challenge patriarchal forces that have disenfranchised us through history.The X is often understood to be more inclusive in that it stands for the many different non binary identities (LGBTIQ) movements womxn are a part of. As far as imagery, an X is formed by two intersecting lines which can demonstrate the intersectionality of feminism. 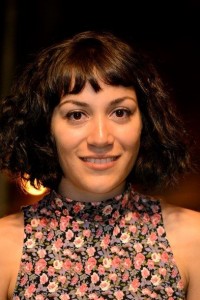 Cristina Awadalla recently graduated from UC, Santa Barbara, where she developed a passion for understanding climate change as a not so ‘natural’ occurrence. She studied the political and cultural systems that perpetuate climate destabilization and fuel the denial movement, as well as the policies that hinder global commitment. She also became enthralled by the types of resistance movements occurring and the solidarity that is found among environmental justice struggles in nearby communities to those fighting forced capitalist expansion abroad and to those producing alternative economies to deal with impacts of climate change. She learned about the current state of the planet and has been driven to resistance by conversation, both formal and informal. This eventually inspired her to contact The Feminist Wire asking to begin a broader conversation around climate change and feminist justice issues.