The connection between land and life has been told through many teachings through a multiplicity of Indigenous communities. Nookomis Winona LaDuke (1999) reminds us that we have relations outside our human kin and in the environment around us. Indigenous peoples honor these relations in ceremony, song, and in reciprocity with their environments. This is even embodied in our languages. Nehiyaw language and worldview is divided between animate and inanimate. Nehiyaw language is also heavily relational and every work contains meaning about how we relate to other forms in our environment. Certain objects which are not imbued with spirit in the Western worldview are considered animate, or having a consciousness, depending on their relationships with other forms they encounter. 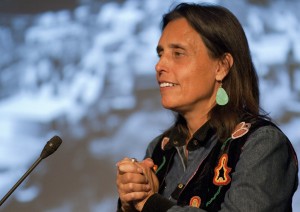 While growing up in northwestern Saskatchewan, Nohkom Maria Campbell learned how the feminine spirit carries with it specific responsibilities to land (Kim, Clow, and Haworth-Brockman 2013, 13). It is women’s and Two-Spirit peoples’ roles within Campbell’s community that facilitate the holding and passing on of environmental knowledge. Campbell describes how grandmothers, as midwives, are responsible for welcoming new life into their community as well as washing and preparing the dead for burial (13). These responsibilities and the ceremonies involved are grounded in the environment—the feminine realm: “younger women have the capacity to hold life-giving waters within, and older women are responsible for helping people move through those waters in times of transition” (13).

Campbell relates a teaching about water being the “veins of this great Mother”:

When you are a little girl, that image really makes you think about water and the little creeks in a different way. That was the blood veins of the earth. You know that if you don’t take care of those things, you can bleed to death or you can get diseases or infections from them. (13)

This teaching tells us about relations between Indigenous peoples, specifically Campbell’s community, and the land. Campbell reminds us that we are comprised of mostly water, just like the earth itself (14). The similarity between our own bodies and the land shows us how everything is connected and how all creation is dependent on reciprocal relationships within these connections.

The periodization of the feminist movement is just one example of how white settler-colonial feminism operates. By centralizing white middle-class women and locating liberation in the neoliberal acquisition of rights and freedoms, white women propagate white-supremacist logics within feminism (Smith 2011). The historicizing of feminism as beginning and ending with white women erases matrilineal, matriarchal, or egalitarian Indigenous societies which existed in these territories for centuries prior to Indigenous colonization (18). In many traditional Indigenous societies, the division of labor between so-called men’s and women’s roles were non-hierarchical and Indigenous communities were often characterized by a complementary balance throughout genders (18). It was actually the imposition of colonial European gender binaries and hierarchies which brought patriarchy to these territories to begin with (23). Furthermore, by locating feminist histories within legal reform, the history of feminism excludes Indigenous women who belong to their own sovereign nations and have no desire to engage with an illegitimate settler colonial nation state (Simpson 2014). 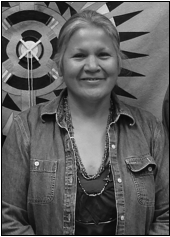 Colonialism and capitalism, which fuel resource extraction and environmental contamination, are an attack on both Indigenous lands and Indigenous peoples’ bodies, the effects of which are apparent in the reproductive health of Indigenous communities. Katsi Cook, who taught us that “women are the first environment” (LaDuke 2009, 18), was paramount in Akwesasne’s standoff with General Motors. The Mohawks and the Haudenosaunee experienced firsthand the perils of environmental contamination and toxins when GM began dumping PCB-contaminated materials within their territories thereby contaminating local groundwater with PCBs and heavy metals such as lead, chromium, mercury, cadmium, and antimony (17). Cook reminds us:

We accumulate toxic chemicals like PCBs, DDT, Mirex, HCBs, etc., dumped into the waters by various industries. They are stored in our body fat and are excreted primarily through breast milk. What that means is that through our own breast milk, our sacred natural link to our babies, they stand the chance of getting concentrated dosages. (18-19)

This is why Cook created the Akwesasne Mothers’ Milk Project in an effort to better understand how toxic contaminants influence reproductive health within Indigenous communities (19). The project found that women had 200 percent greater concentration of PCBs in their breast milk if they ate fish from the St. Lawrence River, which had been contaminated by GM’s dumping (19).

Attention must be paid to the social ways in which industry and development are impacting the right to life, sexual rights and sexual health, and the right to live a life free of violence. Indigenous communities continue to articulate that the introduction of resource extractive industries, including mining, drilling, logging et cetera has resulted in increased sexual violence and sexual exploitation of Indigenous women and girls in many communities, as well as increased unsafe alcohol and drug use, HIV and other sexually transmitted infections, divisions among families and communities, and a range of other social stressors, causing severe psychological, relational, emotional and economic damage to Indigenous women, families, and communities. (NYSHN 2014)

Tuck, Eve, and K. Wayne Yang. 2012. “Decolonization is Not a Metaphor.” Decolonization: Indigeneity, Education, and Society 1 (1).

Lindsay Nixon is anishinaabekwe, nêhiyaw-iskwêw from the Tootinaowaziibeeng Nation. She is also the co-founder of the Indigenous women and Two-Spirit Harm Reduction Coalition in Montreal.

Related ItemsClimate Change and Feminist Environmentalisms ForumecofeminismIndigenous feminismindigenous womenKatsi CookWinona LaDuke
← Previous Story whosoever has let a minotaur enter them or a sonnet— (excerpts)
Next Story → How Did This Happen? Capitalism’s Double Subordination of Women and Nature