whosoever has let a minotaur enter them or a sonnet— (excerpts)

) ONLY THE BIRD GENES REMEMBER

between her thighs, the buffalo holding sky.

it is violent nuclear august.

a neon pegasus ricochets off the venetian. burnt icebergs

lick the mountain’s ankle. a moth drags its shadow

across a solar system. chickens sing

the grief of the trees. from the inside out: gills into wings,

) IN THE BONE MARGIN

a greyhound pursued to static. her thin & scarcely believable arms.

fishy sounds from sherbet strollers. in the flaming

part like children. a suicide swaggers in a garden plot. breaking

like a patient, pink to orange in the failing

there is one world & she approaches it approximately, an eve
god did not intend

more, she begs of the less desperately/   alive.

the mammoths, she tells herself, ate marigolds. the tongues of

the birds are free of the past. at first you were nothing, not even

then the light came to contain numbers.

a spoon scrapes the back of the universe. she looks into the mirror;
there are her lips, eyes

a pop anthem between

) THERE WAS (WE DECIDED) NO HEAVEN

like a glacier or a saint, clouds mix with solar systems, ruby

goblets of taillight … we wanted to live

trees singing as they expire, & feathers—

THE BODY (HELL) JUST AS YOU SEE IT.

rewind in the lefthand proem

dissolving to inebriated cumulus foxglove hurled for some kind of

I’m going to go out on a limb here & say these are love poems. That for me this work is about femininity & optimism. (Not limiting love to the erotic but drawing attention to endeavor, struggle, social change, & political action.) Ecofeminism, as my work inhabits it, is not so much a theory as an invitation: to challenge anthropocentric assumptions about what can be turned into bodies, what turns are taken in bodies, what ends up in bodies, and what bodies themselves end up as in the end. It is my ambition in these poems to start to do so by listening; by freeing the autobiographical “I” from the tyranny of rationality & the human intelligence; by (re)animating the landscape as an actor with consciousness, inventiveness, & intention; & by reconnecting language with carnal participation in the world. To start looking at the situation from my new view of nature. To see if I can identify myself. If I can see the beauty that was there all along despite our being there. This may be where I start making decisions that matter. 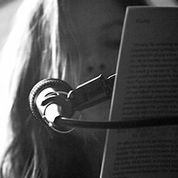 Emily Carr is recently inspired by feral cats, Indian wolfgirls, pirate lifestyles, the world wiped clean of answers (it’s where we’re at), the stars (you see they’ve been clear dead for years), countless continental moves and romping with the cat named Dirt, as well as the ability to comprehend beauty, which is poetry, and as to listen. And change, or be changed.

To that end: Emily is collaborating with a volcanologist and a cognitive psychologist on a series of vintage earthly curiosities, which will collect the science, metaphysics, and poetry of the world we think of as earth. Why? Because it’s okay to be bewildered, run wild, or dwell like Robin Hood, outlawed and at home.

Emily has a PhD in Creative Writing from the University of Calgary, an MFA in Creative Writing from the University of North Carolina-Wilmington, and a BA in English and Piano Performance from the University of Missouri. She has published scholarly work on ecofeminism, ecopoetics, and creative writing pedagogy in EcoGothic: An International Anthology (University of Manchester Press), HOW2, Jacket, International Studies in Literature and the Environment, English Studies in Canada, Women’s Studies: An Interdisciplinary Journal, Feminist Teacher, and Fractured Ecologies (forthcoming, University of Brussels, 2016). Her second book of poetry, 13 ways of happily: books 1 & 2, was the winner of the 2009 New Measures Poetry prize. whosoever has let a minotaur enter them or a sonnet—, a collection of fairy tales, is forthcoming from McSweeney’s in August 2015.