Thugs R’ Us – The Feminist Wire 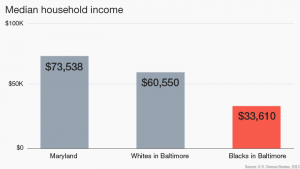 “Thugs”—that was virtually the first word the world heard out of Baltimore Mayor Stephanie Rawlings-Blake’s pedigreed mouth during her press conference last week on the uprising against state violence and the apparent murder of 25 year-old Freddie Gray.  Facing intense backlash, Rawlings-Blake tempered her comments at a black church where, fittingly, disgraced and/or contrite members of the black political elite often go for redemption.  Rawlings-Blake’s thug diatribe stood in marked contrast to Maryland State Attorney Marilyn Mosby’s emphatic acknowledgment of community resistance in announcing her courageous indictment of the six officers involved in Gray’s death.

The epithet “Thugs”, as it’s been pointed out numerous times, is a word that has an egregiously racial/black association.  While there are corporate thugs, police thugs, suburban thugs, crown thug oligarchs and imperialist thugs (historian Michael Parenti aptly dubbed George W. Bush the “biggest thug to occupy the White House”) the term is mainly trotted out in the mainstream when black youth are involved; conjuring up titillating neo Birth of a Nation scenes of ghetto chaos, criminality and macho swagger.   “Thugs” was law enforcement’s slur du jour in the aftermath of the Los Angeles uprising following the Rodney King Beating verdict in 1992.  The Baltimore uprising coincided with the twenty third anniversary of civil unrest in L.A.  There has been little improvement in the socioeconomic climate of South Los Angeles where much of the rebellion was focused.  The current jobs’ climate in South L.A. is bleaker than in ‘92 when the region was reeling from the decline of the aerospace industry and the region leads in the number of incarcerated youth.  Similarly, the decline of the shipping and manufacturing industries in Baltimore has gutted black incomes.  Despite being in the majority, African Americans in Baltimore make nearly half the income of whites and the unemployment rates of black males are over three times that of white males. Poor black youth in the city have high rates of exposure to violence, homicide and sexual assault and suffer from all of the mental and emotional health traumas associated with these disparities.

But there was no reference to these institutional factors in the mayor’s comments.  There was no indictment of the thuggery inherent to the apparatus of state violence and racialized wealth inequality that Baltimore’s black political elite have cosigned.  While condemning her constituents’ lawlessness, there was no recognition of her complicity in or accountability for the abysmal state of socioeconomic and educational underdevelopment that’s festered on her watch.  As one Baltimore resident “sitting on the steps of a boarded-up brick row house” stated acidly, “We ain’t talking about color.” Masters of expediency, bourgie disconnected system-identified black liberals are always comfortable trafficking in the slurs and platitudes of up-by-your-bootstraps reactionaries.  Desperately grasping at the reins of power, Negro politicians have always been adept at regurgitating the ruling class’ language in order to deflect from their own record of neglect, disservice or outright dereliction.

The dire poverty and segregation of Baltimore may be in the national spotlight now but the real question is what will conditions in the city be like for disenfranchised black residents in a decade when the cameras have gone away, the furor has died down, Rawlings-Blake has moved up the political food chain and her “liberal” colleagues, Negro or otherwise, have become more savvy with their demonizing terms of choice.

Sikivu Hutchinson is the author of Godless Americana: Race and Religious Rebels and Moral Combat: Black Atheists, Gender Politics, and the Values Wars.  Her novel White Nights, Black Paradise on the Jonestown massacre and Peoples Temple is due in Fall 2015.  Twitter @sikivuhutch