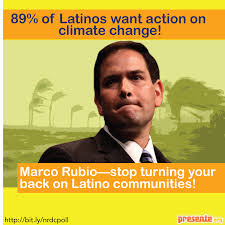 Ever since misbegotten Republican retread Alan Keyes burst onto the scene as the anti-Obama in 2008 it seems as if every presidential race demands at least one hyper-assimilationist alpha male of color who embraces the Christian fascist God, Guns n’ Gays shtick more zealously than his overseers. In a recent interview with CBS, newly announced GOP presidential candidate Marco Rubio “judiciously” conceded that being gay is not a choice but drew the line at supporting legal and constitutional protection for gay couples, claiming that “supporting the definition of marriage as one man and one woman is not anti-gay; it is pro-traditional marriage.” In the same interview he reiterated his willful ignorance of the science behind climate change. Both viewpoints represent a repugnant backwards conservatism more in lockstep with the Party’s demographically challenged white fathers than the “fresh” “new” constituency Rubio says he’s trying to appeal to. Rubio’s nose-thumbing climate change denialism is especially dangerous for the younger generations that he claims to represent. Failed by segregated high stakes test-happy public schools, Millennials who already struggle to grasp basic science and math don’t need a Gen X flat earther who gets his discredited theories about climate change from the Bible. And while Rubio demonizes cap and trade policies as “dangerous” to the economy hedge fund billionaires, construction conglomerates and the Koch brothers are among his top ten donors.

Cynically looking to play the ethnicity card, Rubio and his handlers haven’t even bothered to do any market research on his supposedly built-in ethnic constituency. According to the National Resources Defense Council, nine in ten Latinos believe climate change is destructive and should be substantively addressed by the federal government (indeed, 92% of Latinas believe government intervention should be a priority). Climate change ranks second only to immigration reform as the most important political issue for Latino voters. According to the Latino Decisions group, “86 percent are convinced that we have a moral duty to give our children a clean planet and that our ancestors worked and cared for the Earth, so we must continue their heritage and legacy by fighting climate change and protecting the environment.”

Banking on his bright-eyed bushy tailed persona and Latino heritage, Rubio’s brownface antics are offensive to millions of undocumented, working class people of color who see nothing but nativist anti-immigrant hysteria and capitalist greed oozing from the GOP’s platform. They are offensive to the scores of queer and trans youth of color who are overrepresented among the incarcerated, homeless and foster care populations (unlike fellow candidate Rand Paul, Rubio has yet to say a peep about mass incarceration’s impact on Latinos. The private prison operator GEO Group is one of his top ten donors). Contrary to Eurocentric images of same-sex marriage, African Americans and Latinos are more likely to be in same-sex families and partnerships than are whites. Same sex families of color are also more likely to live at or below the poverty line; a stat that underscores the perniciousness of Rubio’s opposition to same sex marriage, climate change, reproductive rights and the Affordable Care Act. While corporate Dem Hillary Clinton is hardly a panacea for communities of color, a GOP presidency in brownface would plunge gay, lesbian, trans and undocumented families of color even further into poverty.

By 2044 the U.S. will become a “majority minority” nation with whites declining to 45% of the population. This means that the long term health, ecological and social impact of climate change will wreak the most destruction on poor and working class communities of color—communities already overburdened by policies that allow mega-billionaire businesses like the Koch brothers’ to profiteer and pollute with impunity. Rubio’s fealty to big business, anti-undocumented immigrant nativism and the homophobic Religious Right solidly aligns him with the very forces that would ensure the 1% remain status quo—only with a new generation of brown (and black)face flat earth minstrels doing their bidding.

Sikivu Hutchinson is the author of Godless Americana: Race and Religious Rebels and Moral Combat: Black Atheists, Gender Politics, and the Values Wars. Her novel White Nights, Black Paradise,on the Jonestown massacre and Peoples Temple, is due in Fall 2015.  Twitter @sikivuhutch

Related Items
← Previous Story Vegan Praxis, Black Lives Matter, and Water Rationing: A Conversation with Dr. A. Breeze Harper
Next Story → A Beginner’s Perspective on Being a Woman in Different Spaces of Environmental Activism