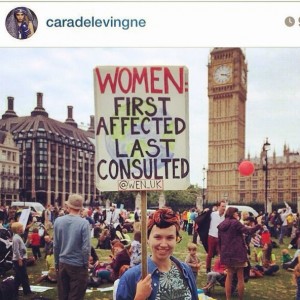 Since September 2014, I have worked for Women’s Environmental Network (WEN), a small London-based NGO that works towards environmental justice and gender equality by drawing vital links between the two, empowering women as change-makers, and educating people on health and wellbeing, their own and that of our drowning, wheezing world. At the time of the People’s Climate March in September last year, I was WEN’s Media and Communications Volunteer, and thus decided to march in a professional as well as personal capacity, hoping to garner a little publicity for WEN. On the morning of the march, I made a placard. It read: “WOMEN: FIRST AFFECTED, LAST CONSULTED @WEN_UK”

The words I had chosen to walk beneath were succinct and provocative. Casting a (slightly) more knowing eye back across the six months that separate my past, naive self from its present incarnation, the events that followed as a result of those words hardly seems surprising. Thanks to some cosmic alignment, I ended up standing a few feet away from British supermodel Cara Delevingne. Seeing my sign, she gestured a request to take a picture. I agreed, smiled, and less than five hours later, the photograph had over 180,000 likes on Instagram, plus a torrent of comments, all of which I forced myself to read.

There were personal attacks on my physical appearance. There were odiously self-assured pseudo-intellectual appeals to reason and other gods about feminism’s insatiable appetite for public victimhood, a number of which came, heartbreakingly, from women and girls. There was also, it should be said, some genuine curiosity: are women really first affected by climate change? How? These enquiries and any supportive voices were lost, however, in a sea of vitriol.

This was my first lesson in ‘being a woman in a politico-public space’ (1). So what had I learned? It was immediately obvious that gender is completely absent from the officially constructed, publicly received ontology of climate change. So, too, are questions of race and other axes of power and privilege. It was also clear that my womanhood and all that it entailed was profoundly offensive to certain people and to their ideas about a specific cause. My body and all it represented on that day, coupled with my sign and in the context of the march, was regarded as a contaminant.

In response, I wrote a light-hearted, even flippant article answering the question “why women and climate change,” reflecting upon the latent sexism present even amongst ostensible “good guys,” those invested in a social justice movement such as environmentalism. Thinking about it now, however, I am more interested in the question of different spaces for doing good in the world, and the relative access to those spaces that marginalized groups experience, as well as the relative efficacy of activism in those spaces. I have been reflecting on a dualism encapsulated in the history of WEN: campaigning and lobbying governments, industry and the general public on one hand; and local, ground-level, grassroots action on the other.

WEN was founded in 1988, and for the following twenty years fought for top-level policy change regarding health and environment. WEN lobbied the sanitary products industry, initiated parliamentary acts on waste minimization, presented petitions to the Department of Health, and launched a highly-praised report on gender and climate change in the House of Commons.

As it did for so many small and medium-sized charities, the financial crisis hit WEN hard. In order to survive post-2008, WEN downsized and changed its modus operandi. The personal replaced the political. 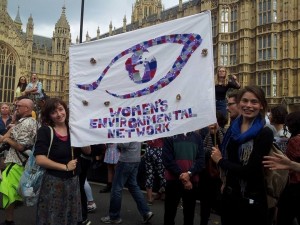 WEN currently works in the field of food sovereignty. We run workshops on urban food growing; for example, we were commissioned by Tower Hamlets Council to build and run community food gardens in housing estates across one of London’s most deprived boroughs. We co-ordinate a food growing network and run a seed library. As we evaluate each project, for funding applications and such, what becomes abundantly clear is the real, immediate difference the projects are making in people’s lives. The majority of the food growing network is comprised of Bangladeshi women, and community gardens enable them to grow Bangladeshi vegetables that are too expensive to buy imported. The gardens and workshops help with problems of social isolation and are used in mental health therapy with great success.

What is also clear is that no one we help objects to our work because we are women. No one for whom we built a food growing garden has ever called us “fucking dumbass feminists.” None of the people we work with care whether we are “ugly” or not. None would describe our feminist ethic as “senseless whining.” (These are all direct quotes expressed in the comments under Cara’s Instagram post of me with my sign.)

I am not the first to point out that, compared to community work, campaigning and lobbying at governmental, industry or public level can be a relatively thankless task. My brother works for another environmental NGO, one dedicated to international legislative change. He has spoken to me about the feeling that an entire lifetime’s dedicated work might make only the tiniest difference. Tempting as the instant results of local work may seem in comparison, grassroots activism can only go so far.

In December 2014, I interviewed Professor Susan Buckingham of Brunel University, a feminist geographer and former trustee of WEN, about Gender Day at COP 20 in Lima. I asked her opinion on the relative benefits of grassroots action and top-level policy change, and in particular invited her thoughts on the potential risks associated with individual or community action, of absolving industry and government of the responsibility to tackle problems that are of their making, not ours. Her response was that we need both:

“Grassroots, local action is really important as it gives people power and confidence that they can make change. However, they need to be supported in doing this, and governments and businesses work against them in so many ways, encouraging us to spend money on unnecessary things, encouraging food waste, built in obsolescence, etc.”

Buckingham points out that industry and government policy actively make it difficult for people on the ground to live sustainable lives. Top and bottom approaches, therefore, must be linked if progress is to be made at either end.

Of course, a single charity cannot be everywhere at once, and thus we choose a particular means of achieving a particular set of goals. So which do we choose? Top or bottom? Official politics or grassroots action? I cannot answer this question for myself without considering how I am constituted differently in these two spheres according to my gender.

Women have a long and illustrious history of exclusion from official spaces, from national and international decision-making, from political determination, from policy. Perhaps this is why we have always flourished in grassroots movements. Look at Idle No More, one of the largest Indigenous mass movements in Canadian history, started by four women. I am not an essentialist, but perhaps it has something to do with the crucially non-hierarchical and non-competitive organization of grassroots actions that enables women to work well in these kinds of environments. Paraphrasing Audre Lorde (1984), maybe the rules of the master’s house just don’t suit us.

But what about those women who choose to enter the lion’s den nonetheless? Women activists in official spaces face a specific set of challenges in negotiating the politics and languages of an arena from which we have been excluded for so long. Women’s Environment and Development Organisation (WEDO) runs a training program for women delegates at UNFCCC (2) conferences; it is known as the Women Delegates Fund “Night School,” because classes take place after a full day of negotiations. As usual, women have to work twice as hard for an equal starting place. The Night School answers “the critical need for… spaces to discern, understand, practice skills and network with other women delegates,” enabling women to navigate the complex processes, techniques and jargon of the UNFCCC format. It is a question of learning to speak another language without losing sight of what they came to say.

The episode that began this train of thought was, of course, merely a drop in the ocean. My experience of abuse was a small scratch compared to the full assault that so many people of marginalized identities have faced in public spaces and political discourses. I am but a rookie in the struggle for environmental and social justice. But from this naive beginning — still idealistic, still convinced of a future of greater equality, or even a future at all — I am already starting to map out the field of land mines through which activists must forge a careful path. I am already wary of the top. I am already aware of the difficulty in answering the question: How best can I — as a woman, as anyone — try to do something good in the world?

(1) I will take this opportunity to register my awareness of my own privilege as a white, straight, cis-gendered woman. The focus I place on my womanhood as the form of oppression faced in these instances is due to my personal experience, and does not suggest that other axis of identity are not at least as relevant, if not more, to the question of exclusion and prejudice in official spaces. 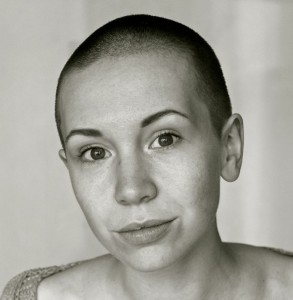 Born and raised in South London, Georgie Johnson is an M.A. student at the Courtauld Institute of Art, where she studies sex and violence in contemporary American art. She is currently writing her M.A. dissertation on depictions of capitalist violence in video art post-2008 financial crisis. Georgie works for London-based charity Women’s Environmental Network and has written on the subject of gender and climate change for The News Hub and Mashed Earth, and reported for the New York Times. She is interested in environmentalism as it intersects with human rights and social justice. Reach her on Twitter @JajiyJohnson.