The best part of your story is when it changes. Moving from a south suburb of Chicago after thirteen years, to a rural town in Iowa led to the biggest change of my life. Nikki Giovanni’s words, “A lot of people resist transition and therefore never allow themselves to enjoy who they are. Embrace the change, no matter what it is; once you do, you can learn about the new world you’re in and take advantage of it.” hold so much truth and could easily be applied to anyone’s life. Through my strife, I have changed. Cocooned myself, blossomed, evolved. 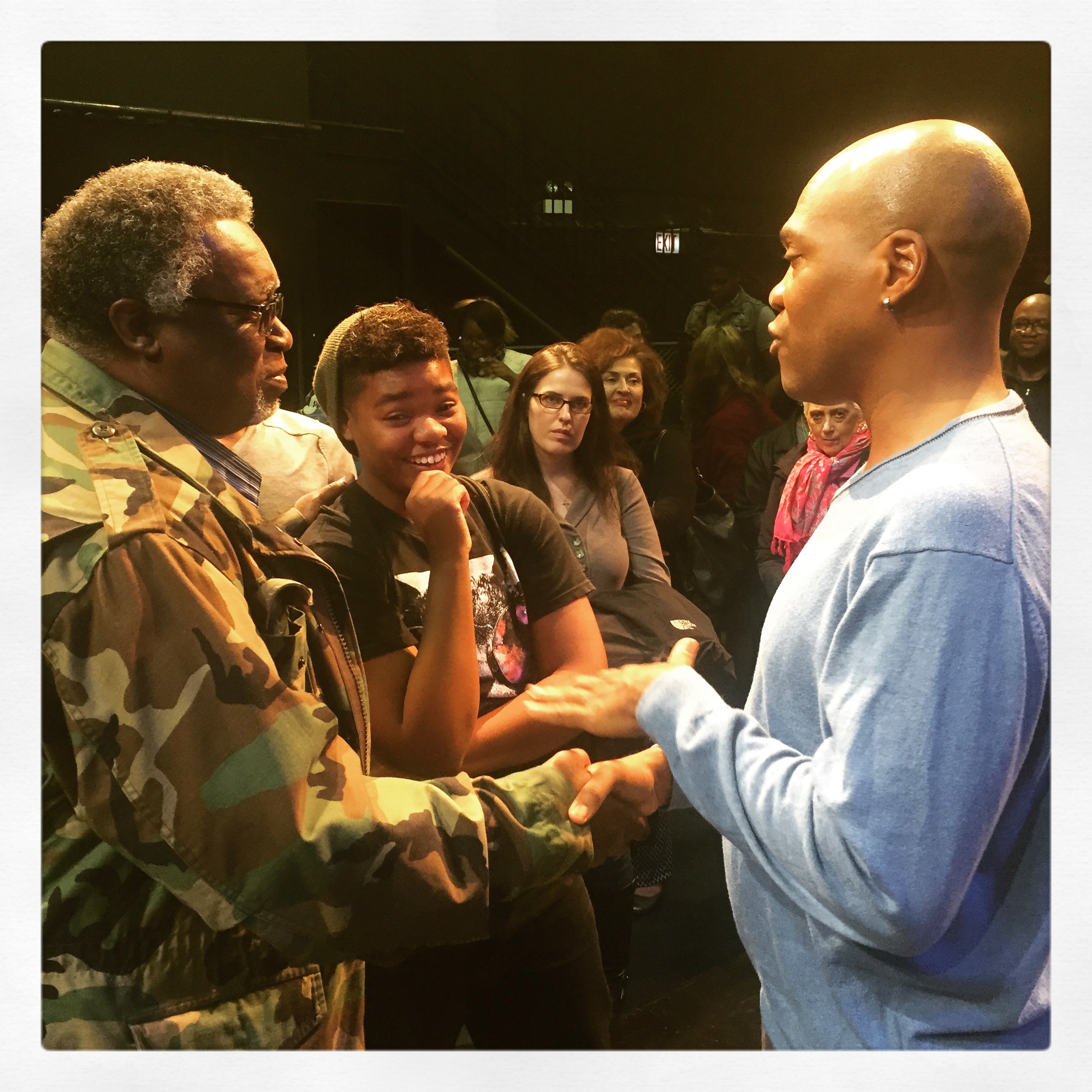 In 2015, Charles and his Grandfather came to Northwestern to sit in on a class with Kai M. Green. They also all attended E. Patrick Johnson’s “Sweet Tea: Black Gay Men of the South” one man-show. This is after the show.

Coming out to my grandmother as a lesbian at 9 was difficult to say the least. I had spent the years before then self-harming anytime I felt anything that I felt would get me in trouble. When I finally said those words, I expected a relief. A relief that did not come that night, but instead waited years. She wouldn’t speak to me for two weeks. My grandfather and my father and his wife were the only people I knew that were supporting me. Coming out four years later as genderqueer was a mere wave. Out of the many people I interact with in person, only two people were told of this revelation; my stepmother and my best friend, Blake. Within a span of three months, I had moved four hours away from my suburban home to a quiet life in Iowa, leaving my Christian school and my sick grandmother behind. The guilt still eats at me, but change is sometimes painful. Starting my new life felt easy; natural, almost. School was really different, but I soon found my niche in the music program and also found myself in wrestling and basketball. I was openly pansexual the beginning of my seventh grade year and was labeled as a “Social Justice Warrior” early on. Things seemed great! Having a “nuclear family” and activities aside from band that were not available at my previous school were dreams of mine that were suddenly coming true. December of the same year, my best friend and brother, Blake died of an alleged suicide attempt. This crushed me. I was left in a state of a mournful stupor. My self-harm was at an all-time high and as I result I was sent to a mental hospital. At this place, I was hesitant, but eventually, after a short visit of nine and a half days, I was released and my parents were informed of my diagnosis: Gender dysphoria, depression and anxiety. I knew I was trans, but I had denied it for so long that I had created versions of myself that made more sense than money spent on changing my body that no one else saw as wrong but me. This was the beginning of my true odyssey.

Bloodied with knuckles and curious/ Intrusive fingers and fragments of other people/ Lingering in new hands/ Exploring territories that were not theirs/ They leave me broken and bleeding/ A trail of tears across my cheeks/ My mouth does not detest, but my body contorts./ I hide the evidence

When I returned home, my stepmother bought me new clothes so that I could present as masculine. Coming out to her and my father went really well, which may have in part been due to the fact that it was done in a hospital with doctors explaining gender dysphoria to them. My first few days back at school were rough as to have been expected. Stares and questions came as frequent as the moon. My stepmother told me one particular day of indescribable frustration on my part after spending hours under the scrutiny of my peers while I was working out, the question of where my penis was became a hot topic. “Educate them,” she told me. Ever since, I have been withholding my anger and focusing the energy into creating spaces in my area where these questions are asked and answered in a respectful and safe manner.

I tape the chest and ignore the stinging/ I bind the chest and my breath is shallow/ Strangling myself with someone else’s eyes/ I hide./ If only I could peel back the skin/ The skin that has seen many hands/ Never truly felt like a man/ But still I stay. I stay black

High School felt like it started easy. Since my bathroom arrangements were set up prior to my first day of classes, it was simply easing into the bustling groove of Freshman year. Immediately, I set out to start a G.S.A. (gay straight alliance). Initially turned down, the following year, the club was approved and is currently awaiting its first meeting to happen very soon. The first plans are to get a gender neutral bathroom installed in the Commons and to create new policies regarding name changes in the school system for students with non cisgender identities. In April, we hope to continue and expand the annual tradition of attending a local LGBTQ+ conference which raises awareness on many sexual and mental health problems in the community and provides resources for people looking to start a G.S.A. at their school, homeless teens, and even helping trans individuals find clinics and doctors. From my small town, my goal is to create a community for anybody that has ever felt like me. To create a home for those atypical to the heterosexual cisgender white norms of Mount Pleasant, Iowa is to create a home for me just a few years ago.

I stay loud./ I stay hiding and pretending/ If I’m pretending, is it true?/ “I have to be a man,” my mind tells my hands/ My body knows the posture and the walk and the voice/ Foreign./ It’s all too foreign.

At fifteen, I have experienced things many people have not and will not experience. It has taken many years for me to get to this point in my life where I can reflect on who I was and who I am now. I can be proud. The misery I experienced growing up while being in the closet was evident. The change is obvious in my spirit and in the manner in which I care for others. I am working at continuing to build myself up. My own journey has become the prime example of change in my school’s G.S.A. As a leader for those that seek my advice, I have found myself learning about the beauty in my reflection as well as the pain I have seen. Overweight, black, trans boys like me exist all over the world. From my negro lips, I have professed the change in me and aim to continue to make Mount Pleasant, Iowa an inclusive and safe space for everyone. 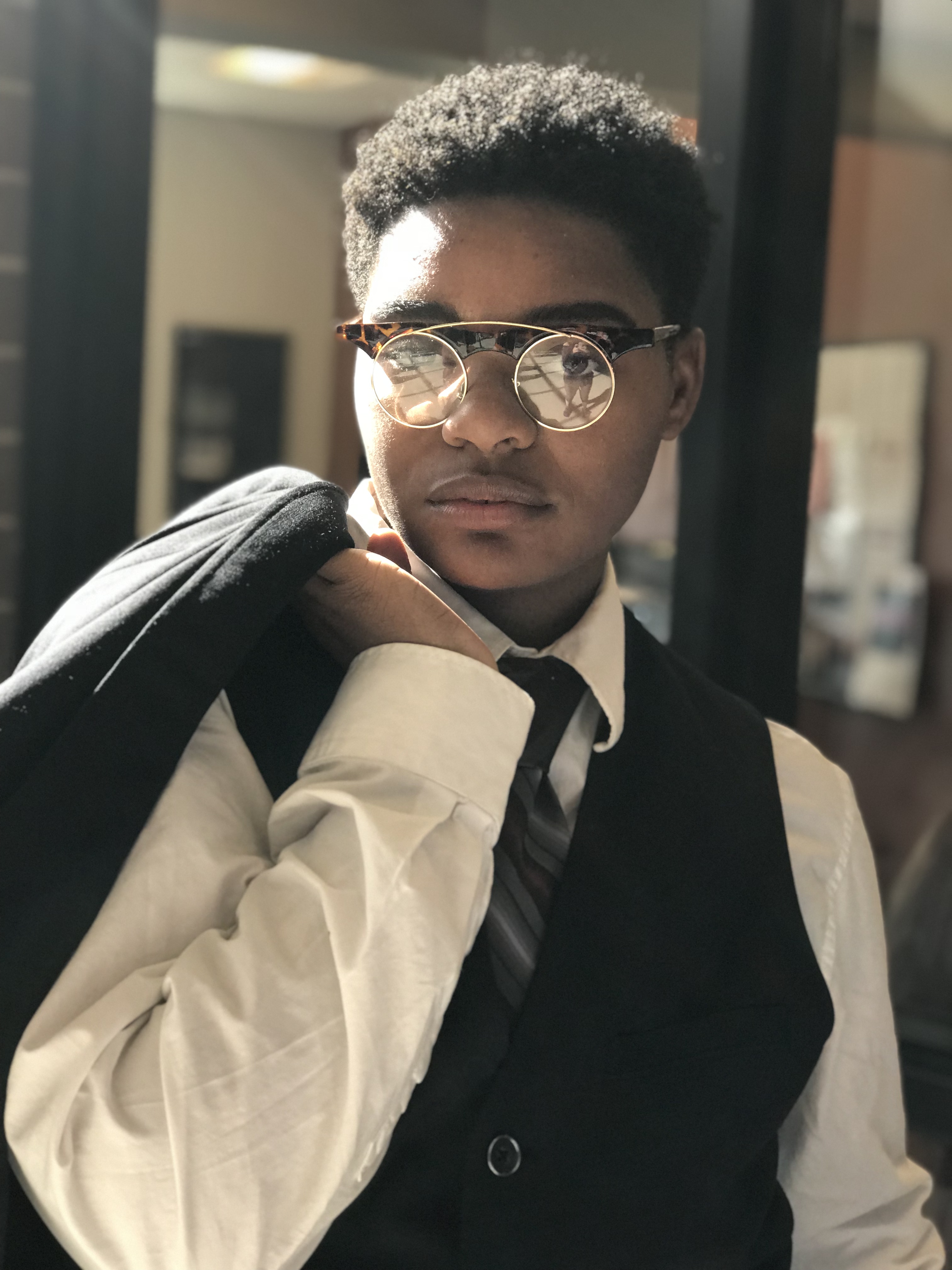 Charles Huey Greene is a young black writer, poet, and activist. He enjoys playing the ukulele, piano, guitar, trombone, and trumpet. At fifteen, he takes part in each of the 5 elite music programs at his high school, he is president of his school’s gay-straight alliance, takes AP classes, and is in the drama program. Outside of his busy schedule, he enjoys spending time with his family and his puppy Sofia.