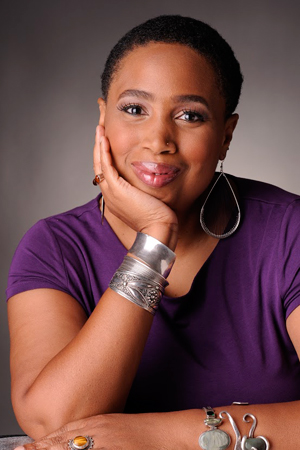 “True liberation must come from within. I am a Black feminist lesbian who is a survivor of both incest/child sexual abuse and rape. What better individuals to lead the movement to end child sexual abuse than those of us who have not only been directly impacted, but who are actively engaged in transforming that unspeakable trauma and terror into healing and liberation? Love, for me, is a verb—an action—and I consistently strive to be the embodiment of what I want to womanifest in this work.”
—Aishah Shahidah Simmons

TFW Associate Editor Aishah Shahidah Simmons is a member of the Just Beginnings Collaborative‘s inaugural cohort of eight child sexual abuse (CSA) survivor-activist leaders who received a two-year fellowship to devote their full time to design and implement projects that specifically address CSA. Aishah received funding to develop #LoveWITHAccountability, her multimedia project that will uplift the ways that accountability is a necessary form of radical love needed to address child sexual abuse. #LoveWITHAccountability will also examine how the “silence around child sexual abuse in the familial institution plays a direct role in creating a culture of sexual violence in all other institutions—religious, academic, activist, political and professional.”

The Just Beginnings Collaborative grew out of a groundbreaking multi-year partnership between the NoVo Foundation and the Ms. Foundation for Women (from 2009-2014) that helped to establish a national network of leaders and organizations working to end child sexual abuse. Building on this foundation, the Just Beginnings Collaborative launched in 2015 as an independent project funded by the NoVo Foundation that is designed to support the field in achieving a new level of visibility and impact.

Aishah Shahidah Simmons is a Black feminist lesbian documentary filmmaker, cultural worker, and international lecturer. An incest and rape survivor, she is the Creator of the Ford Foundation-funded internationally acclaimed and award-winning feature length film NO! The Rape Documentary. She is currently completing a semester-long Sterling Brown Professorship residency at Williams College, and has previously taught in the Women’s and LGBT Studies Program at Temple University. She was also an O’Brien Distinguished Visiting Professor in the Feminist, Gender and Sexuality Studies Department at Scripps College and a Visiting Lecturer in the Department of Cinema and Media Studies at the University of Chicago. Committed to archiving, documenting, and telling Black women’s herstories and contemporary realities, Aishah was a Co-Curator and Co-Editor of The Feminist Wire‘s (TFW) June Jordan Forum with Mecca Jamilah Sullivan, Heather M. Turcotte, and TC Tolbert, as well as Curator and Lead Editor of TFW’s “Global Forum on Audre Lorde” and Co-Curator and Co-Editor with Heidi R. Lewis of TFW’s “Toni Cade Bambara 75th Birthday Anniversary Forum.” Aishah is also the author of several essays, including “Removing  the Mask: AfroLez®femcentric Silence Breaker,” featured in Queering Sexual Violence: Radical Voices from Within the Anti-Violence Movement, “AfroLez®femcentric Perspectives on Coloring Gender and Queering Race,” and the Foreword to Dear Sister: Letters to Survivors of Sexual Violence. She has screened her work, guest lectured, and facilitated workshops and dialogues about ending all forms of sexual violence; queer identity from an AfroLez®femcentric perspective; the grassroots process of making social change documentaries; and non-Christocentric spirituality at colleges and universities, high schools, conferences, international film festivals, rape crisis centers, battered women shelters, community centers, juvenile correctional facilities, and government sponsored events across the United States and Canada, throughout Italy, in South Africa, France, England, Croatia, Hungary, The Netherlands, Mexico, Kenya, Malaysia, and India. You can follow Aishah on twitter at @AfroLez and connect via her public Facebook page.