Transgender Medicine: Medicare Access to What? – The Feminist Wire 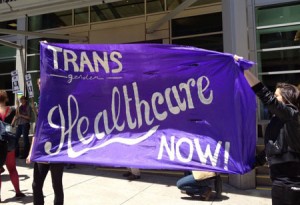 After a debilitating injury at work left Shane Smith permanently disabled, he joined the ranks of more than 50 million Americans who receive health insurance through Medicare. Smith used the federal program to manage his injury-related care but, as a transgender man, he also wanted to use Medicare benefits to cover the cost of chest reconstruction surgery that was an important part of his transition from female to male.

Fortunately for Smith, the US Department of Health and Human Services—the federal department that administers Medicare—overturned a longstanding ban on coverage for such procedures in May 2014. The decision brought the USDHHS into accord with a growing consensus of medical professionals (including the American Medical Association, the American Psychiatric Association and the American Psychological Association, among others) who consider transition-specific surgeries for transgender people to be “medically necessary” treatments.

The overturn of the Medicare ban has rightly been celebrated as a positive move for the health of transgender Americans. At the same time, the effects of expanded coverage are bringing pervasive problems with American transgender medical care into sharp relief.Shane Smith sees these problems every day.

After Smith successfully used his Medicare coverage to get chest reconstruction surgery, other hopeful Medicare recipients began reaching out to him. “People started asking me, ‘How are you doing this? What did you do?’ I was getting tired of typing the same thing over and over so I created a Facebook group. It grew and grew and it continues to grow.” In just six months, Smith’s group “Transmedicare” has swelled to over 2200 members.

Through fielding personal messages, emails and phone calls from people from every US state, Smith sees first-hand how individual transgender Medicare (and Medicaid) recipients are struggling to understand and make use of their new coverage. Questions range from the very basic—What is the difference between Medicare and Medicaid? What happens if I have both?–to the Kafkaesque intricacies of massive bureaucracy—How do I get reimbursed for a procedure that has already been performed?

Coverage for transgender surgeries is no longer banned, but neither is it guaranteed. Individuals must work with mental and medical care providers to produce a series of documents by which their “medical necessity” is established. This can be expensive and especially challenging in areas where trans- friendly providers are hard to find. Next comes the bigger and more worrying problem: finding a surgeon who can perform these specialized procedures.

While chest reconstruction surgery for trans- men is performed by a relatively larger number of surgeons—which does not mean it is a large number—surgeons capable of performing the more complex genital procedures are harder to find. One reason is that there are very few of them practicing in the US, in general. Since the early 1980s, when gender clinics in American universities closed their doors, transgender medicine has been a privately practiced, market-based service. There are no American medical schools that offer training in this specialty.

The small pool of surgeons is made even smaller by the fact that few accept Medicare, or any kind of insurance. Some trans- surgery specialists have told me that they haven’t accepted any insurance plans in decades because reimbursement rates are abysmal compared with what resourced patients are willing to pay out-of-pocket. According to one statement that Smith has seen, Medicare paid only 5% of what a surgeon billed for genital surgery. “We know of one private surgeon not affiliated with a university that is accepting Medicare right now,” Smith said. “This is a man who has to pay his electricity bills, pay his employees and he’s still doing it. I give him kudos. He obviously understands that people need to access this care.”

According to Smith’s personal research and the information he gathers through group participants, there are only three surgeons in the US who perform genital reconstruction surgeries for both trans- men and trans- women and who also take Medicare; they’re located in Michigan, Illinois and Florida. Geography is a problem for many people. “If you look at the statistics,” Smith said, “most people who are transgender are at the poverty level. If they don’t live right in the state where services are offered, most can’t travel to access the care. So you’re providing a service that people can’t obtain because they can’t pay for the travel, they can’t pay for the lodging, they can’t pay for the durable medical equipment that’s not covered. They don’t have the funds.”

In addition to the inaccessibility of practitioners, many of the procedures that trans- people identify as crucial to their care are not covered by Medicare. While reversing the ban on “transsexual surgery,” the 2014 Medicare policy retained the outdated language of “transsexualism” (a diagnosis that no longer exists) and “transsexual surgery” (a term for surgery that is no longer used). As a result of this language and interpretation, genital surgery is now the only type of surgery that is explicitly covered.

But, according to Smith, genital surgery is not the kind of “treatment” that most trans- people are looking for. “75% of the trans- identified people who reach out to me aren’t seeking genital surgery,” he said. “They can’t find any kind of practitioner who will provide breast augmentation, facial feminization surgery, or electrolysis.” Some insurance policies administered as Medicare or Medicaid explicitly exclude coverage of these procedures. Others are unclear, leaving the determination of what counts as “medically necessary treatment” up to individual Medicare recipients and the clinicians who care for them. “Because we don’t have a clear policy,” Smith said, “We have no providers. We have none.”

While these stories should certainly be taken as critiques of existing Medicare policy, what is more important is to see how new modes of access are exposing longstanding problems with the way trans- specific medical and surgical care has been managed in the United States. Held over stigmas, unclear policies, inadequate provider training, and an overall shortage of experienced providers, leave “access” and “coverage” empty words.

In the face of this opacity and uncertainty, trans- people are organizing and sharing information on their own, building networks to share information and advocate for themselves and for each other. “It’s become a passion for me,” Smith said of his daily work calling surgeons around the country and responding to the deluge of questions he receives every day, and updating his site, transmedicare.com. “I was disabled and had kind of lost my purpose in life until this happened for me. Now I’m just glad I can help others.”

This is the third installment in a series about the status of transgender healthcare in the United States.

Eric Plemons is Assistant Professor of Anthropology at the University of Arizona.