Even though I was assigned male at birth and raised in a home with a strict emphasis on gender roles, I, as a trans woman, internalized that which was labeled “feminine.” I had been socialized to understand things like confidence and outspokenness as masculine traits, and I wanted nothing to do with masculinity. In fact, the idea of being recognized as a masculine subject made me feel sick. I grew up learning not to speak or assert myself in any meaningful way out of fear of being belittled or made to feel unintelligent, as well as out of fear of being read as masculine. In my later years, as I began to transition, I found myself doubling down on this self-policing of expression and behavior. I first came to internalize the male gaze as a young woman and now I was internalizing the cis gaze. I was afraid to show anything even resembling confidence. This fear operated on such a deep level that I often didn’t even consciously realize how much I was censoring myself and changing my behavior.

As a writer on the Internet with a small public platform, this has utterly stifled me. Often folks will talk about how “political correctness” has made them afraid to share their true and honest thoughts online. In fact, those same people are praised for bravely “telling it like it is” by the vast majority of society. However, trans women who “tell it like it is” — that is, trans women who speak honestly and directly about their experiences — face more than just scorn from a few people on the internet: they too often encounter complete denial of their identities. They experience being outed to their families and employers, which can place them in immediate danger, whether it be violence, homelessness, unemployment or otherwise. I too have witnessed how viciously and heartlessly trans women are treated for expressing themselves honestly. I can say with all certainty that I don’t really care if someone who tweets a racist joke gets excoriated when the above is happening to trans women who are merely asserting their existence.

Trans women are often accused of reifying gender, of upholding the roles that serve to subjugate, control, and exploit “real” women. However, what is often overlooked is the extent to which trans women are forced to carry out traditional femininity as a matter of their own safety. This seems counter-intuitive because feminine people as a class are not “safe,” as they are subject to constant threats of myriad forms of male violence. Yet, within this class, trans women who do not perfectly perform femininity arguably incur a higher and more immediate level of danger than cis women. In other words, to be visibly trans is to be always in danger. Furthermore, the pressure to be traditionally feminine operates on a psychic and emotional level, to the point that behaviors, mannerisms, thoughts, feelings, and even subconscious desires are rewired to fit the box of cis womanhood. Specifically, the trans woman must be quiet, humble, and soft if she is to be recognized as a “real” woman.

This policing essentially silences those already at the margins of society. And, it is for this reason that I have stayed silent on so many issues for so long. I have been careful to express my thoughts in ways that don’t come across as accusatory or too angry, or, in other words, that can cause me to be read as “masculine.” It’s automatic. I hardly ever imagine writing something that may be construed in any way that might subject me to the cis mob. When I do, I self police. I shut the idea down. Interestingly, I find that people are drawn to me because of perceived humility. However, what they note as humility is actually a near total lack of self-worth, and more, a fear of having my feminine identity denied. Truth is, what I wan to say is, “I am like this because your world has broken me down and made me this way, not because of humility.” But then I worry that this may come across as too confident and angry, so I don’t anything.

This dynamic of fear and self-censorship has manifested itself in many ways in my life. As a trans woman who writes and is interested in having her writing published, I have had to contend with various barriers. Some are based in obvious transmisogynist attitudes, while others are more insidious. Tokenization is, of course, rampant when it comes to the inclusion of most marginalized subjects in any field. The world of literature is no different in this respect. In order to have my writing voice included, I’ve had to allow myself to be tokenized and held up as an example of the open-mindedness of cis folks. And in order to remain a token, I’ve had to present myself in a way that is palpable and non-confrontational, even as I attempt to critique structures of power through the expression of my experiences as a trans woman. In short, I’ve been navigating a world that only wants me as long as I express the pain said world has caused me in an enjoyable and emotionally evocative manner.

Though as of late my poetry has become more explicitly “political,” transmisogyny tells me I need to be humble and quiet. While I have begun to challenge this push and pull within myself, the question remains: how do we effectively fight said push and pull in the world at large? I hope and believe that talking and writing about it openly will be a start. 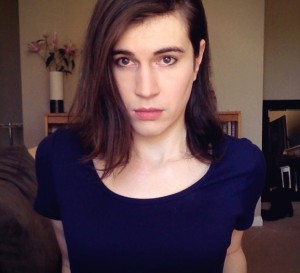 Joshua Jennifer Espinoza is a trans woman poet living in California. Her work has been published in The Offing, Shabby Doll House, Word Riot, and variously online. Her first book “I’m Alive / It Hurts / I Love It” was released by Boost House in 2014. More of her work can be found at joshuajenniferespinoza.com and on Twitter @sadqueer4life.

Related Itemsfemininitymisogynytransgender
← Previous Story Saying It Loudly: I Had an Abortion at Planned Parenthood
Next Story → EMERGING FEMINISMS: Rainbow Fire: Equality of Marriage