Saying It Loudly: I Had an Abortion at Planned Parenthood – The Feminist Wire

Home / Bodies / Saying It Loudly: I Had an Abortion at Planned Parenthood

Saying It Loudly: I Had an Abortion at Planned Parenthood

I’m saying this loudly. I’m saying this loudly because it needs to be said. When I was in college, I was raped. I wasn’t even twenty-one yet. Along with being raped—and finally realizing I had actually been raped—I also realized something else in that month. I was pregnant. I became pregnant. My body was not my own. A man had claimed it, and now, there was a baby.

I was alone. My best friend was studying abroad. I had other friends, but none were the kind I could ask to accompany me to get an abortion. It’s not something casual you can suggest over an early morning egg sandwich, or at a party where mostly everyone is in their underwear. During those weeks, it would not be an overstatement to say I hated myself. I wanted to disappear—to somehow not exist in the universe. In other words, I wanted to die.

There was no way in my mind that I was ready to have a child. I was barely an adult myself, still in college with hardly any money (despite that I worked several jobs), didn’t have a boyfriend, and had just been violated in one of the most terrifying ways. While I knew in the deepest, darkest, most honest depths of my bones, I also felt responsible for the pain I knew I was about to feel. I decided I was not going to have the baby, but a huge part of me felt as if I was becoming the very monster who did this to me in the first place.

In my guilt-addled mind, I could hear the voices of my family, of others I didn’t even know, tell me I was killing a baby—my baby. Being raped was not my choice—but this—getting rid of my baby as if it didn’t exist in the first place—that was my choice. It sickened me. What does that say about me? I was fighting death with death—the death of me, the death of a child. Part of me wished I could abort me, not the child. But again, I knew it had to be done; and in many ways, I knew I wasn’t wrong. There were many voices in my head then, and I knew I had to be strong enough to listen to my own. To listen to my body.

It rained a lot in those few months. Maybe it was because it was spring, maybe it was my sorrow manifesting itself around me. Or maybe it was just in my head. And no, I didn’t tell the man who raped me that I was pregnant, with his child. He didn’t, and doesn’t, deserve to know. He didn’t care enough to listen when I said no. Yet still, I would cry alone on my bedroom floor or in my closet so none of my roommates would hear me, praying to some faceless god to make me not a woman, make me anything else. I would pretend to be happy at parties and in class. Most of my friends never realized what was happening to me. I was a very good actor.

I did the only thing I could. I went to Planned Parenthood. I didn’t have a car and the closest one was too far for me to walk to. So I took a cab. I was afraid to visit the health clinic on campus, half assuming they wouldn’t be able to help, but also afraid they would make me tell the on-campus police. I didn’t want to report it; I didn’t want to bring any attention to myself. When the cab rolled up after I finished work, I got in and noticed the driver was a man. I promptly told him where I needed to go. He said nothing.

When we arrived in front of the Planned Parenthood, he paused for a moment, then said, “You know, I can wait here for you if you need me to.” I paused, too. I was grateful to him, even if he didn’t realize what he was saying, even if he just felt bad for me because I was a young college kid. I told him no, that I would be fine. I wanted to be alone. The rest, as they say, is history.

This is a story about why we need Planned Parenthood, about how they helped a poor college student get the help she needed at her most vulnerable. They listened to me, treated me well, and didn’t offer any judgments. Eventually, I began to realize I did exactly what I needed to, that I didn’t need to hate myself for it. It took a long time for me to realize that instead of being angry at myself, I should be angry at a society that makes women feel this way. What kind of “free” country allows women to think this way?

I’m speaking out, not because it is easy, but because I know no other way. How can I live another way? How can I let Planned Parenthood be defunded when it saved my life? And saves the lives of other women everywhere, whether with cancer screenings, birth control, or abortions. I want other women to have what I had—the ability to live. But I also want women to have what I didn’t—the ability to make a real choice, not a shamed one. I do not want other women or girls to go through what I did—wanting to disappear, for someone to just make it all end. 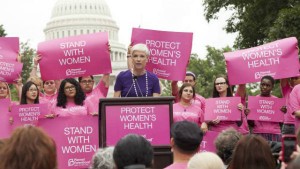 We need to reach a point where we can talk about ending a pregnancy, not as something to feel ashamed about, but as common. As normal for women everywhere, not just in the United States. And normal for women who weren’t raped, who just aren’t ready to be mothers yet, or to add more children to their already existing families. There are endless reasons why a woman may not want to continue a pregnancy, and we need to support women with kindness and compassion. Shouldn’t we value women enough to let them think thoughtfully about bringing life into this world? Abortion doesn’t mean anti-motherhood or anti-life; it just means we’re giving women the choices they need.

Joanna Christi is an author of several books. Or a ghost.