By Aishah Shahidah Simmons on September 5, 2014 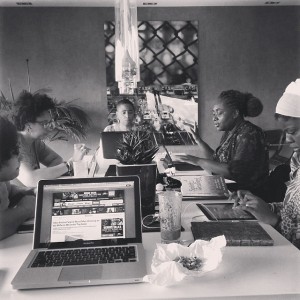 With each of our dead, we mourn the loss of a piece of ourselves and with each of our raped we mourn the loss of a piece of our souls. We can and will name Renisha McBride alongside Michael Brown; Rekia Boyd alongside Trayvon Martin; Jada alongside Abner Louima; Naffisatou Diallo alongside Amadou Diallo; the New Jersey 4 alongside the Jena 6; Mia Henderson and Kandy Hall alongside Jordan Davis and John Crawford III; Aiyanna Stanely-Jones alongside Oscar Grant; and Sakia Gunn alongside Sean Bell. The right to freedom and the right to live and breathe should not, does not, nor will it ever exclude Black women.

We name 94 year old Recy Taylor who, on September 3, 1944, was kidnapped while leaving church and brutally gang raped by six white men in Alabama, propelling Rosa Parks into action, and we name her alongside ourselves—Black women, brazen women who today are still engaged in a centuries old “painful, patient, and silent toil … to gain title to the bodies of their daughters.” –Anna Julia Cooper, 1893. 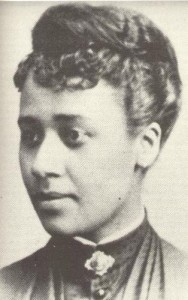 The week of August 9th, 2014, over one hundred years after Anna Julia Cooper’s statement, six Black women, an out-of-the-ordinary delegation from the United States travelled to the United Nations in Geneva, Switzerland to hold the U.S. responsible for ending racial discrimination on its soil.  The very first of our kind, this herstoric delegation of Black women from America went to face the U.N. Committee on the Elimination of Racial Discrimination (CERD). We went to speak of the atrocities and the havoc wrought by racism on the Black bodies of women across sexualities and gender identities. As Black Women’s Blueprint Executive Director and Co-Founder Farah Tanis, Co-Founder Christina Jaus, Critically Acclaimed Poet Nikki Patin, Award Winning Activist Filmmaker Aishah Shahidah Simmons, Healer Sherley Accime and Visual Artist Frances Nielah Bradley, we were transported and transfixed in moments which could only be articulated in historical terms. 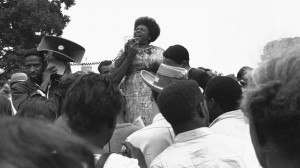 Vulnerable, determined and glued to our seats ready to bear our souls as survivors, as human rights defenders, as witnesses and testifiers, we summoned the courage in the presence of the international community to speak the unspeakable—rape in Black communities has become a trivial matter, victims are the brunt of jokes and social media fodder, harm-doers and rapists are excused without question within the context of a racist, sexist, “free-for-all” status quo environment we haven’t seen since slavery reigned in the Antebellum South and rape was legal and profitable. We assert that we are still living in the climate described by Fannie Lou Hamer, when she said a “Black woman’s body is never hers alone.”

We were there to denounce the daily rapes of Black girls and Black women, expose state sponsored violence, denounce the invisibility we feel is almost complete, our relegation to the extreme borders of the margins, and yes we would denounce other crimes—those crimes not just against the majority of Black women in America, but against lesbian, gay, bisexual, transgender, queer, other gender-non conforming people of African descent—“others” routinely unnamed in critical debates on the evils of racism in the U.S.

Trembling with humility and responsibility, filled with reverence as we knew we were and had been for a long time, standing “on other people’s blood”, and standing on very great shoulders. Now more than ever it was time to speak. 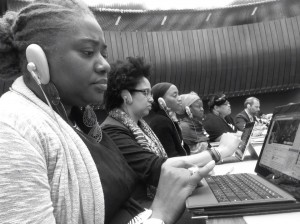 We each spoke in turn and simultaneously, in a chorus of voices, video, art, testimony and statement. We deployed our voices in a collective outcry against the brutality that is sexual violence and asked the U.N. CERD Committee what would be done to end the suffering of Black women, girls and LGBTQ people in the U.S. and for reasons too many of us understand feared the worst— that we would not be heard and the response was indeed silence. Member after member of the U.N. CERD Committee spoke on education, prisons, the shooting of our Black sons and brothers, the very real plight of endangered peoples and LGBTQ people, but we Black women did not make the cut that day, despite all we had spoken and despite all we had shown.

“I keep hearing about the murder of Black children, but what about the rape of Black children, women, men, trans folks? What about a form of violence that can result in the murder of the spirit? What about this insidious form of violence that is so pervasive that practically every woman I know has been touched by it? What about protecting the right to exist freely in one’s body? We revere the dead and condemn the living. Who will stand up for the walking wounded? Who will dare shatter this awful, awful silence?” ~ Nikki Patin

Were we truly better off dead? 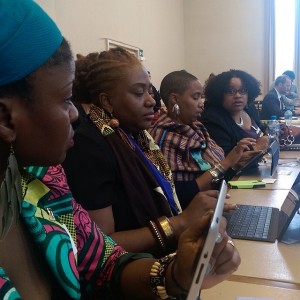 “We know and understand full well that the pain [of rape] is real, and though it is expected to eventually become a distant memory, for many of us it is a pain that resurfaces over and over again.”~ Sherley Accime

“As a Black feminist lesbian who is an incest and rape survivor, I am reminded that the struggle to talk about and address state and personal violence against Black women and LGBTQ people in a local, national and international racial justice framework is never ending and relentless. Any individual, organization, institution, treaty and/or law that ask us to choose our oppression is not interested in our full liberation. The end of racism, while extremely important does not mean that Black women and LGBTQ people will be safe from violence.” ~ Aishah Shahidah Simmons

Were all the Blacks still men?

We are making critical demands to the U.N. Committee members on the issue of personal violence. We are speaking honestly and unapologetically about the epidemic of state-sanctioned violence against Black women, girls and gender non-conforming people in the U.S. It is pervasive, it is destructive and the long-term effects are tremendous.~ Christina Jaus 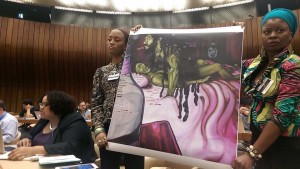 “What I offer is visual representation of my narrative. It was meant to be for me to be here, and you were all meant to witness this”- Frances Naelah Bradley

Though we were standing there, fully flesh and blood, had we really fallen out of sight and out of the minds of these leaders from which we demanded justice?

“It is by telling our own life stories and by writing new narratives toward justice that we practice liberation, heal ourselves and shift the current paradigm—lifting the foot of oppression off of our necks so we can be free. Therefore the Black Women’s Blueprint will continue to make our voices equally central to all processes, all debates and strategies on race, racism and we will position our gendered experiences squarely within the context of what you consider the “broader” racial justice concerns of Black communities—bar none. The rapes and sexual assault of Black women are racial justice issues.” ~ Farah Tanis

Only the black woman can say ‘when and where I enter, in the quiet, undisputed dignity of my womanhood, without violence and without suing or special patronage, then and there the whole Negro race enters with me.

We demanded recognition and ready with strategies, prepared to act in voice and protest, and on August 14, 2014 the last day of our mission to the U.N. it was African women Fatimata-Binta Victoire Dah of Burkina Faso; Afiwa-Kindena Hohoueto of Togo; and Patricia Nozipho January-Bardill of South Africa who named Black women in America. It was African women who acknowledged the centrality of our experiences to the broader racial justice struggle, and it was them who named the rape of Black women in America a human rights violation. We had finally been heard and it was African women who were able to hear us. We had been seen and it was them who saw us first, with all the pieces of our selves and all the pieces of our souls. 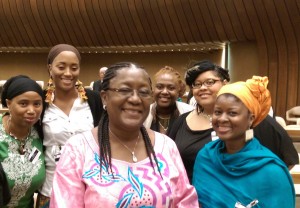 With the release of the U.N. response acknowledging the plight of Black women and LGBTQ people of African descent in the United States, it has increased our resolve. We must build where racist, sexist, homophobic and transphobic systems have worked to divide and conquer. We must move from positions of arrest. We must tell our stories. We must protest in whatever way we deem fit or enough, and we must certainly heal as we seek justice. All of these are acts of revolution. 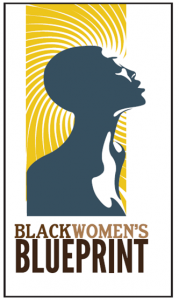 Black Women’s Blueprint‘s Truth and Reconciliation Commission On Black Women and Sexual Assault is the first of its kind to focus on Black women in America and their experiences with sexual violence was launched by Black feminists in the U.S. It is a bold, innovative and groundbreaking move by Black women across generation, ethnicity, sexuality and other identity to confront the ever shifting nature of rape culture, and sexual violence against African-American/Black women in the United-States.

Since its launch in 2010, Black Women’s Blueprint’s and members of its Truth Commission have been very involved in human rights advocacy, which places gender, gender identity and sexuality squarely within the context of what are often considered “larger” racial-justice concerns of Black/African American communities in the U.S. Part of our work over the years has been to monitor U.S. compliance with regard to specific human rights treaties and engage with treaty bodies as well as communities through training, development of testimony and since 2013, the development and submission a Shadow Report in response to the U.S. periodic report to the U.N. Committee on the Elimination of Racial Discrimination.  On June 30, 2014, Black Women’s Blueprint (BWB) submitted their first Shadow Report to the Committee on the Elimination of Racial Discrimination. Please access the report entitled “Racial Discrimination And Sexual Violence Against Black/African-American Women, Including Those Identifying as LGBTQ and The Impact of Inadequate Racial Justice Initiatives and Violence Prevention Policy Implementation in the United States” co-authored by Farah Tanis, L. Michelle Odom, and Aishah Shahidah Simmons. 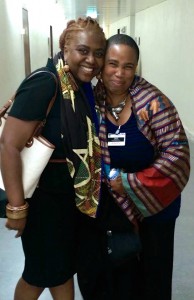 Farah Tanis is the Co-Founder and Executive Director of the Black Feminist Organization Black Women’s Blueprint (BWB) and the Museum of Women’s Resistance (MoWRe). Currently housed at Black Women’s Blueprint’s HerStory Archives, MoWRe is internationally recognized as a Site of Conscience.  Farah launched and Chairs the first Truth and Reconciliation Commission in the U.S. ever to focus on Black women and their historical and contemporary experiences with sexual assault. Farah also created Mother Tongue Monologues, a vehicle for communicating Black feminist praxis at the grassroots and for addressing Black sexual politics in African American and other communities of the Black Diaspora. You can follow Black Women’s Blueprint and Farah on twitter at @BlackWomensBP and  @FarahTanis1. For more information, please visit: www.mothertonguemonologues.org/aboutfarahtanis.htm

Aishah Shahidah Simmons is the Creator of the internationally acclaimed and award-winning feature length film NO! The Rape Documentary and an Associate Editor of The Feminist Wire. She is a member of BWB’s Truth and Reconciliation Commission. Aishah is also an adjunct professor in Women’s and LGBT Studies Program at Temple University and she was an O’Brien Distinguished Visiting Professor at Scripps College during part of their 2014 Spring Semester. She screens her work and lectures extensively across North America and internationally about ending all forms of sexual violence; queer identity from an AfroLez®femcentric perspective; the grassroots process of making social change documentaries; and non-Christocentric spirituality. You can follow Aishah on twitter at @AfroLez. For more information, please visit: http://NOtheRapeDocumentary.org