Who Will Revere Us? (Black LGTBQ People, Straight Women, and Girls) (Part 1) – The Feminist Wire

Who Will Revere Us? (Black LGTBQ People, Straight Women, and Girls) (Part 1) 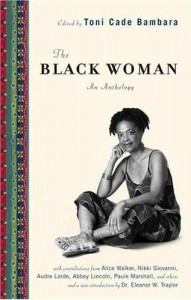 The title of this four part article is a metaphorical nod to the legendary jazz singer, songwriter, actor, and activist Abbey Lincoln (also known as Aminata Moseka) whose essay, “Who Will Revere The Black Woman?” is featured in the ground-breaking anthology The Black Woman. Edited by Black feminist author, screenwriter, and visionary activist Toni Cade Bambara, this all-Black woman anthology focused on the issues most pertinent to Black women and our communities. Originally published in 1970 and reissued in 2005 with a foreword by Dr. Eleanor W. Traylor, The Black Woman was the literary wo/manifestation of the impact of the intersection of the Civil Rights/Black Power movements and the second wave of the Women’s Rights movement on Black women’s lives. In short, Ms. Lincoln’s ageless essay is a demand for justice and protection for Black women. In her concluding paragraph she writes,

In her 1983 prophetic and timeless essay, “There Is No Hierarchy of Oppression,” self-defined Black feminist lesbian mother warrior poet Audre Lorde writes,

I am struggling to find the right time to discuss inter and intra-racial gender-based violence in the midst of the justified outrage about the rampant and virulent racialized violence perpetrated against straight Black boys and men.  Even with this being Sexual Assault Awareness Month, now doesn’t feel like the best time to write about the gender-based and state-sanctioned violence perpetuated against Black straight women, girls, and LGBTQ (Lesbian, Gay, Bisexual, Transgender, Queer) people both inside of and outside of our racial/cultural communities. I fear that sharing what’s on my heart and mind, might be construed as my taking away from the “real” issue at hand in most Black communities, which seems to be solely white supremacist and/or state-sanctioned racist violence against straight Black men and boys.

Audre Lorde’s writings remind me, however, that discussions on oppression within Black communities should never be taken up within an either/or frame.  The diverse herstories/histories and contemporary realities of Black straight women, girls, and LGBTQ people have consistently revealed that the issues that directly impact us often take a back seat, if they even make it into the metaphorical car on the freedom and liberation highway.

There is a collective understanding among many in multi-racial, radical progressive movements, that the white supremacist, patriarchal, heterosexist, imperial, and capitalist power structure is the root of all oppressions in the United States. While I believe that to be true, even in the company of other oppressed people, Black straight women and LGBTQ people are still under attack. Too often we are caught at the intersections of race, gender, and if we identify as LGBTQ, sexuality. In spite of our shared his/herstories of oppression, struggle, and perseverance against the odds, not enough Black people view sexism, patriarchy, misogyny, heterosexism and transphobia with the same kind of activist passion that we view racism, white supremacy, and state-sanctioned violence perpetuated against straight Black men and boys.

There are so many egregious, known and unknown, cases of racial and gender-based violence perpetuated against all Black people, regardless of their gender, gender identity, and sexuality, that it is literally impossible to write about all of them. I want to highlight a selected few of the far too many, however, to ask Black/African-American/African descended people to consider our responses when any of us have been railroaded into the prison industrial complex, sexually or otherwise assaulted, or murdered. I want us, Black/African-American/African descended people, to consider our responses to issues that affect many as opposed to those issues affecting some of us based on our gender, gender identity, and/or sexuality. 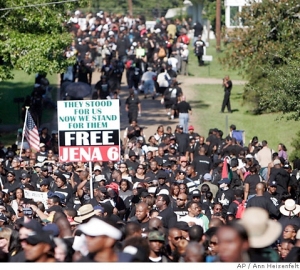 We can look at the profoundly powerful and most appropriate national response in support of the “Jena 6” who, at the time, were six African-American high school students (Mychal Bell, Robert Bailey Jr., Carwin Jones, Bryant Purvis, Theo Shaw and Jesse Ray Beard). Originally, they were unjustly charged as adults with attempted second-degree murder and conspiracy counts for assaulting a white student (Justin Barker) in Jena Louisiana. The fight resulted from building racial tensions, which included three nooses hanging from a tree. In September 2007, in response to the charges, a virtual and on the ground mass mobilization resulted in a national protest led by Rev. Al Sharpton, Congresswoman Maxine Waters, radio personality Michael Baisden, and the National Association for the Advancement of Colored People, where thousands of protesters marched on Jena to demand justice and challenge the racism in the Jena, Louisiana criminal (in)justice system. The teens were facing a combined sentence of 100 years and were clearly being railroaded from school into the prison pipeline.  In addition, there were songs created by hip-hop and rock artists, numerous editorials and stories in the mainstream and alternative media, as well as congressional hearings.

In stark contrast, during this same time period, seven African-American lesbian identified women were arrested following a violent altercation with an African-American man in the west village of Manhattan. Three women (Chenese Loyal, Khymesha Coates, Lania Daniels) took plea bargains. The remaining four women (Venice Brown, Terrain Dandridge, Patreese Johnson and Renata Hill), ranging in ages from 19 to 24 years old, were convicted in 2007 by an all white jury, reportedly most of whom were women, and received sentences ranging from 3 ½ to 11 years in prison. Two of the women were parents of small children. As Imani Henry, writer and Anti Police Brutality activist, stated in his June 21, 2007 article in the Workers World Newspaper:

Their crime? Defending themselves from a physical attack by a man who held them down and choked them, ripped hair from their scalps, spat on them, and threatened to sexually assault them—all because they are lesbians. 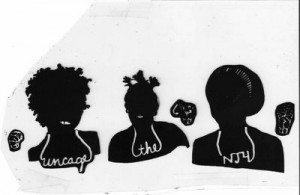 Essentially, these African-American lesbians were viciously attacked, and in defending themselves, were convicted and sent to jail. Tragically, even with the egregious homophobic, racist and sexist, media coverage, there wasn’t a major national outcry organized by African-American Civil Rights organizations, African-American radio personalities, or Black (straight) leaders, not to mention mainstream white LGBTQ organizations. There were no congressional hearings organized by members of the Congressional Black Caucus to examine racism, sexism, and heterosexism in the criminal justice system and its impact on Black youth and young adults.

I can’t help but interrogate if it was because they were Black lesbians that no one in the Non-LGBTQ Black progressive establishment, the mainstream (white) feminist community, or the mainstream (white) LGBTQ community came to their defense and made the convicted “New Jersey 4” a cause célèbre.  In her article, “Case of Killer Lesbians,” sociologist Laura S. Logan gives an in-depth analysis of how the media coverage of these Black women played a direct role in creating false images of them as predators and perpetrators as opposed to victims based upon racist, sexist, and homophobic stereotypes:

Overall, almost two-thirds of the articles characterized the women as angry lesbians in one way or another, and nearly half also used animal imagery or language. They were ‘wild,’ a ‘wolf pack,’ and a ‘she-wolf pack.’ The women ‘pounced,’ ‘growled,’ and ‘roared,’ they ‘preyed upon’ the victim – and several of the articles used such terms more than once. The message is that these women were dangerously wild, masculinized monsters.

Fortunately, FIERCE, a membership-based organization, which builds the leadership and power of LGBTQ youth of color in New York City, provided organizational support including dedicated webpages on their website. FIERCE also partnered with other radical, grassroots LGBTQ organizations working on issues related to this case. 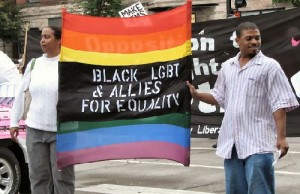 A Gang Rape in Cleveland Texas 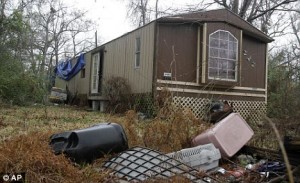 Let’s now fast forward across many egregious known and unknown injustices to the gang rape of an 11- year old Latina girl child by 14 African-American men and 5 boys, ranging in age from 14-27, in an abandoned trailer in Cleveland, Texas in 2010. The multiple rapes of the former straight A student-girl-child were photographed, videotaped, and uploaded on to the web. And, if it can get any worse, in the name of objectively “covering the story,” New York Times reporter James C. McKinley, Jr., used quotes from members in the Cleveland, Texas community that covertly blamed the girl-child for wearing make-up and not dressing in “age appropriate” clothing for an 11-year old (as if that would’ve prevented NINETEEN men and boys from gang raping her). In addition, these quotes called the girl-child’s mother into question for not properly supervising her.  Ironically, McKinley’s article, “Vicious Assault Shakes Texas Town,” was originally posted on March 8, 2011, which is coincidentally International Women’s Day. On March 10, 2011, white feminist Shelby Knox, Director of Organizing, Women’s Rights at Change.org organized a petition to hold the New York Times accountable for blaming the 11-year old child for her gang rape. In less than four days this successful Change.org campaign resulted in 48,857 petition signatures and prompted the New York Times public editor Arthur S. Brisbane, to condemn the article for its lack of balance.

In response to the great number of individuals within Cleveland, Texas’ Black community defending the perpetrators of this most heinous crime, African-American feminist author and journalist, Akiba Solomon wrote several articles in her Colorlines Gender Matters blog. The first post addressed the multilayered atrocities of a community not wanting to hold the perpetrators of the gang rape accountable for their crimes. In her second post, Ms. Solomon stood in solidarity with the Latina girl-child as an African-American woman in an effort to show that she would not allow race to distance her from the victim. Equally as important, Ms. Solomon offered concrete insights and solutions on how Black men can (and must, emphasis mine) play pivotal roles in eradicating rape culture. The third post highlighted the impact of the horrific aftermath on this girl-child who may possibly never fully recover from these vicious and inhumane assaults perpetrated against her. Additionally, African-American journalists, scholars, activists, and theologians including, but not limited to L’Heureux Dumi Lewis, Kellee Terrell, Mark Anthony Neal, TaRessa Stovall, Rev. Nelson Jerome Pierce, Jr., Denene Millner, Crunk Feminist Collective, and What About Our Daughters, were the chorus for many who shared in the outrage and pain.  Unfortunately, these efforts didn’t result in a national outcry on the part of many noted Black Civil Rights organizations and public intellectuals. In fact, the silence on the part of these organizations and ‘leaders’ around all of the issues connected to this heinous crime in Cleveland, Texas was deafening.

Why wasn’t there an expressed collective pain and outcry demanding for justice for the “New Jersey 4” and this Latina girl-child?

There are two answers that come to my mind. One, in both cases, the (alleged) perpetrators are African-American men and boys. Two, as non-monolithic Black communities, many (not all) of us have difficulty viewing both sexism and heterosexism as injustices that, like racism, must be eradicated. I want to be explicitly clear that I’m not advocating for an either “Jena 6” or “New Jersey 4” paradigm. I’m advocating for a both/and paradigm, most especially because both of these cases happened within almost the same timeframe. I would offer that there was a strong possibility that the “New Jersey 4” might not have been sent to jail had there been as much national attention, supported by Non-LGBTQ Black Civil Rights organizations and public intellectuals, on their case as there was on the “Jena 6” case.

(to be continued…stay tuned for Part 2 of this four part article tomorrow.)