Lessons From Ferguson – The Feminist Wire 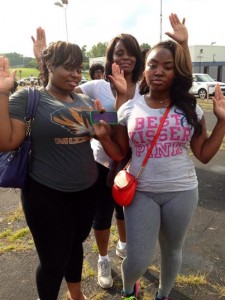 One week ago, we traveled to Ferguson, Missouri, a place that has drawn the attention of the nation. Ferguson has dominated the news cycle, elicited a response from the United Nations, and mobilized thousands not simply because of what happened there but because of how residents of Ferguson responded. The murder of 18-year old Michael (a.k.a Mike) Brown by Ferguson police officer Darren Wilson is only one moment that reveals the ways Black lives are ignored, dismissed, devalued, erased, violated, and systematically destroyed. Instead, the story of Mike Brown’s life and death is not unique. Stories of violence enacted by police, directed at and experienced by Black folks abound. Here is one story. And another. And yet another. Here and here are some more.

Yet violence against Black life is irreducible to “blue on Black” crime or racial profiling in Ferguson. Black folk are disproportionately vulnerable to deteriorating social risks linked to race, sex and class. Ferguson serves as a microcosm of the greater social body, which thwarts Black survival then criminalizes Black reflexive survival tactics. Ferguson is one of 90 municipalities subdividing St. Louis County, a system put in place to control the funneling of resources, services, and tax revenue with the added effect of exacerbating poverty. Additionally, St. Louis has a history of excluding Blacks through covenants, deeds and discriminatory penal policies. Several municipalities have been accused of targeting Black folk for petty crimes like jay walking and traffic violations, issuing fines, and then arresting and jailing residents when they were unable to pay, thus cutting them off from political processes, decreasing their chances of finding paid labor, and limiting both upward mobility and actual movement. And to be clear, these violences against Black life aren’t sex or gender specific. Black women, gays and lesbians, and trans folk face violences too, including “blue on Black” death. 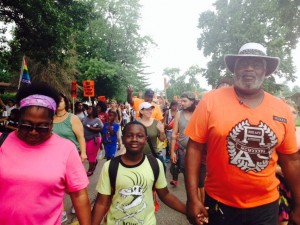 Over the course of last weekend, we gathered alongside other Black Lives Matter riders, who traveled as many as thirty-eight hours, to bring our skills and expertise, insight and empathy, ability to listen and desire to connect to Ferguson. We were asked one question over and over again, “Are you committed to transforming this moment into a movement?” Our final conversations in Ferguson reveal that the answer to that question is quite simply, “Yes.” We emphatically believe that Black Lives Matter–all Black Lives Matter. And changing the narrative and ultimately socio-political praxis from Black insignificance, which enables all kinds of structural and interpersonal violence and dehumanization to innate Black importance and value will require the concerted and strategic works of all of us.

Pivotal to state sanctioned violence against Black life is the historical politicization of identities and the consequential socio-political regulation of subjects through race, sex and class classifications, which name and normalize blackness as criminal and whiteness as innocent thus reframing white supremacist structural and interpersonal biases as lawful and allowable and Black resistance as nefarious. Our hope is to provide an alternative narrative; to tell the other side of the story; to disorient the heterosexist white supremacist metanarrative which makes Black life disposable and state sanctioned violence permissible. We will be writing about our experiences in Ferguson over the next several weeks, participating in a nationwide effort called #FergusonFridays. 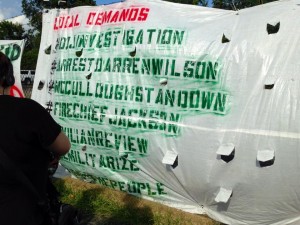 We understand that writing alone will not be sufficient. We returned home ready to do the work through concrete interventions and in collaboration with the communities we work and live in. Ferguson taught us things. So did other Black Lives Matter riders. We carry these lessons with us and offer them to you as you get to work.

1. Space matters. Specifically, responding to Ferguson, specifically, and to violence directed at Black lives, generally, requires that we understand the place. Mike Brown was shot in a Ferguson neighborhood, outside of his grandmother’s apartment mid-day on a Saturday. Mike Brown was shot in a city with a history of systemic racism propagated through the local politics of space and place. These two facts tell us something very important about how racism and its consequences becomes spatialized. Canfield Drive appears not dissimilar from streets in every city in America. Mid-range apartments line both sides of the street, and as such it is more densely populated than a suburban neighborhood might otherwise be. Ferguson residents we talked to noted an important fact overlooked in much news coverage about Mike Brown’s murder–it is only by chance that he was the only person shot that Saturday afternoon. Here, we see that this incident is about Mike Brown, but it is not only about him. It is about all of the Black lives possibly impacted by Darren Wilson’s bullets. Focusing on spatialized local politics redirects our attention to not only the contours of a neighborhood but also the history of St. Louis’ fragmentation into segregated municipalities and the tools of policing used to generate local revenues at the severe and overpowering financial costs to Black families. Here, we see the systemic enactment of tyranny that fleeces Black lives. 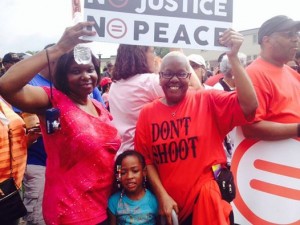 2. Telling a different story about Ferguson, Mike Brown, Black lives, police brutality, everyday racism, and the enduring power of white supremacy is not simply an academic or theoretical exercise. Telling a different story matters. The power of narratives or stories in shaping both socio-political discourse and in personal consciousness cannot be overstated, thus shifting the story is central to justice projects. A movement toward justice for historically underrepresented and marginalized groups must work beyond the level of the personal while simultaneously acknowledging personal experience with respect, dignity, and with deep recognition of the humanity of the teller. On multiple occasions over our time in Ferguson, we heard local folks describe the pain of invisibility of being seen only through the fractured and distorted lenses of mainstream media. The folks in Ferguson appreciated having outsiders there to listen to them with genuine interest and empathy; they needed to be seen, heard and felt, to have Black Life Matters riders bear witness to the social conditions on the ground in the community. They needed us, outsiders to whom Black Life Matters, to be accountable for telling our stories alongside theirs in order to challenge the violence and confusion that mainstream media has created. Our stories and those of the residents function to hold space in a climate that threatens to erase, obscure, and dismiss. The telling of who Mike Brown was, the history of the community, the hopes and dreams people have for their children and for themselves in spite of the oppressive conditions in which they live- those stories must be told not only in our writing and in our classrooms but also in our homes, in conversations with friends and family, to our colleagues, to the parent sitting next to us at soccer practice. If we choose to be silent, we conspire with white supremacy and police brutality. Maya Angelou is famously quoted as saying, “When you know better, you do better.” Those who went to Ferguson now know better. Repeating the stories of those who reside there and speaking our own truths (as outsiders) about what we experienced there are two ways we can begin to do better.

3. Not everyone has noticed. White people are largely inured to the consequences of being Black in America. As the Nation noted in recent weeks, one reason white people don’t understand Ferguson is because white folks largely live white lives. The majority of white folks have no Black friends. Media representation rather than intimate conversation about lived experience dominates whites’ perceptions of what it means to be Black in America. It was encouraging to see white allies marching and protesting within the Ferguson community. However, the disheartening reality of post-race and colorblind social rhetoric  is all too effective in letting white people off the hook. In other words, white people see Black Life Matters and immediately counter with “all life matters.” In addition, they easily admit that the situation is tragic, but fail to engage with it as racial and racialized. This is not new, only insidious. Another problematic moral dilemma for white people in relation to Ferguson is deeply rooted in whites’ reliance on the police state for social order and investment in the belief that police officers are unequivocally heroes, protectors, and public servants. Such unquestioned view of law enforcement disallows the telling and hearing of the ways in which communities of color have very different (and often negative) encounters with law enforcement. And therefore whiteness and its many social/institutional iterations exacerbates the distance between denial and the realization of justice. In the closing speech from A Time to Kill–the one in which Matthew McConaghey gives the eloquent closing argument in defense of his client a devastated African-American father who has taken the law into his own hands by attacking the racist (white) men who brutalized his young Black daughter–McConaghey paints a beautiful, detailed portrait of the child followed by an explicit re-telling of the violence she endured. His final remark to the jury: “Now imagine she is white.” To say the very least, it is unfortunate that we should even have to imagine asking the majority population “Imagine Mike Brown was white.” But would this fact initiate a mass, public outcry for justice? Wouldn’t this single fact change the way Mike Brown is grieved and remembered? And most importantly, wouldn’t the institutional response by police, local officials, and the community at large convey a shared sensibility that his life mattered? To be sure, such an imaginary only further dehumanizes Black and brown bodies in ways that many of us work hard to resist and challenge, and yet it persists as a tool for thought experiementation precisely because the racialized gap in empathy is so real.  In reality if Mike Brown had been white, there wouldn’t even be a Ferguson to speak of.

Our experiences in Ferguson will be chronicled here each Friday throughout the month of September, and we invite you to read other accounts of Black Lives Matter riders through, which can be found by searching #FergusonFridays. 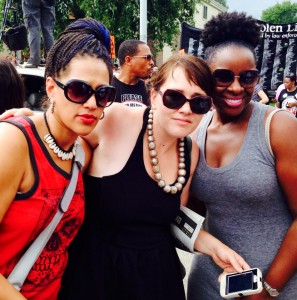 Tamura Lomax is TFW’s Founding Editor. Stephanie Troutman is a Contributing Editor, and Heather Laine Talley is an Associate Editor. Read more about us here.