Rotten to the Core: The NFL and Domestic Violence – The Feminist Wire

Home / Black life matters / Rotten to the Core: The NFL and Domestic Violence

Rotten to the Core: The NFL and Domestic Violence

The National Intimate Partner and Sexual Violence Survey found that fully a third of women in the United States have experienced partner violence. Authors of the study note that the long-term consequences and public health burdens are “substantial,” especially for women. And yet, while many feminist groups continue to attend to these concerns and to seek redress for victims, intimate partner violence has receded from public attention since the 1970s, when the women’s movement made it a major focus. Despite the statistics, domestic violence (or DV, as some activists call it) is often portrayed as a historical artifact rather than a persistent ugly crime. 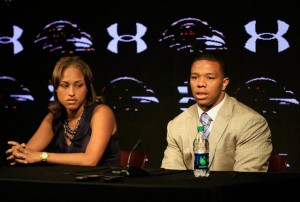 Today, with the release of the horrific video in which we see Rice coldcock his fiancé, we see once again that the system, from TMZ to ESPN, from the sports media to the legal system and the public at large, cares little for Janay Rice. It cares little about her desires, her voice, her body, and her victimization. “No one cares that she is now going to have to relive this incident over and over again. No one cares that the world has now become privy to what may be the most humiliating moment of her entire life,” notes Dave Zirin. “No one cares that she’s basically now being used as a soapbox with otherwise apolitical NFL commentators using her prone body to get on their high horse and blast the league. There is video and those who never raised their voice publicly about the axis of domestic violence and the NFL before are the loudest shouters now.”

How many NFL officials and players have thought about the hopes and dreams of Janay Rice? How many people, who excused Ray Rice throughout the summer only to feign outrage and shock today, continue to erase her humanity? How many radio hosts and articles, tweeters and online commentators, continue to reduce her to an object to be consumed, shared, and gawked at with the help of TMZ.

And if they really cared, where were they over the summer; where have they been in each and every case of domestic violence within the NFL; where have they been when activists have demanded that they participate in the Purple Ribbon campaign to raise awareness of domestic violence? Where have NFL officials and pundits been when women assaulted by their partners face severe traumatic brain injury – an issue about which the NFL claims to care deeply? As sociologists Dan Morrison and Monica J. Casper ask, “What we are not paying attention to when we focus our lens predominately on male victims of TBI, such as combat veterans and football players, and the need for better protective gear? What of the silent epidemic of domestic violence in the United States, through which women suffer high rates of traumatic brain injury?”

The Ravens deserve NO praise for releasing Rice today, as its members spent months dismissing the seriousness the situation. Whether they saw the video before today is irrelevant given a summer of denial. “It’s not a big deal, it’s just part of the process,” Coach Harbaugh told ESPN over the summer. “There are consequences when you make a mistake like that. I stand behind Ray. He’s a heck of a guy. He’s done everything right since. He makes a mistake, allright? He’s going to have to pay a consequence. I think that’s good for kids to understand it works that way. That’s how it works, that’s how it should be.” One has to wonder what message Harbaugh thought he was sending to girls throughout the nation, when he describes the brutal assault on a woman as “no big deal.” What sort of message was sent to Rice and countless other boys and men about what those consequences should be?

The NFL has some serious soul searching to do regarding not just its failures with Ray Rice, but with a culture that profits from violence, on and off the field. As of 2012, 21 teams had a player on its roster who had faced domestic violence or assault charges. Many of the men faced no real consequences. It is abundantly clear, over and over again, that profits takes precedence over people behind the NFL Shield, as evidence by the organization’s prioritizing of the game and the business of the NFL, concerns that are advanced well ahead of Janay Rice and justice, every single time.

The Ravens and the NFL are not alone, as the prosecutor also has a lot to account for in this case. The prosecutor offered Rice the ability to participate in New Jersey’s pretrial intervention program (PTI). Supposedly this decision was reached “after careful consideration of the information contained in Mr. Rice’s application in light of all of the facts gathered during the investigation.” What facts? What information? Is it the same sort of information that has anchored a culture that seemingly normalizes and accepts domestic violence? Is it more of “domestic violence is a private matter?”—which is very nineteenth century. Tell us what sort of facts, and while you are at, how might you clarify whether or not the NFL was given the tape. Because right now, it is hard not to see this case as yet another moment where the power structure goes to every length to protect and serve patriarchy. 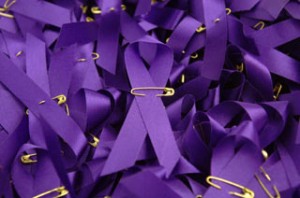 In a nation where 24 people experience intimate partner violence every minute, most of them women, Ray Rice is a mere microcosm of a larger systemic injustice. In a nation where 1 in 4 women report intimate partner violence, there are many more Janay Rices than we can even imagine (for more devastating facts, see the work of Soraya Chemaly). In a nation where 138 GOP members of Congress voted against reauthorizing the Violence Against Women Act, forgive us as we roll our eyes at any moral posturing from those very people who actively sanction a culture of violence. In a nation where most incidents of domestic violence go unreported and where women are punished, sometimes by death, when they finally gather up the courage to leave an abusive partner, it should surprise nobody how much has been done to victimize Janay Rice over and over again, despite her heartbreaking and unnecessary apology for “the role that she played” in the incident.

According to Soraya Chemaly, “The number one cause of death for African American women ages 15-34 according to the American Bar Association: homicide at the hands of a partner.” It’s bigger than Ray Rice; it’s bigger than the NFL and the Ravens. This is about patriarchy and masculinity; it’s about those who cite “mitigating circumstances,” who blame the victim, who justify “boys will be boys,” who systemically detract from the deadly issue of domestic violence. “ But in a world in which one in four women [a recent survey reveals a number closer to 1 and 3] is the victim of intimate partner violence and black women are disproportionately targeted, this victim blaming is not just irresponsible; it is lethal,” writes Hannah Giorgis. “Black women are punished when attempting to defend themselves: 94% of black female homicide victims are killed by people they know and 64% of those victims are wives, ex-wives or girlfriends of their killers.”

Ray Rice might be our current poster child, a symbol that allows the NFL to distance itself from domestic violence. But this is about a culture that, again and again, shows us that women’s lives, and especially Black Women’s lives, don’t matter. To stand up and say enough, to demand not only justice for Janay Rice, but accountability from the Ravens, the NFL, ESPN, and so many others, is to assert that the lives of women, the lives of black women, matter. As Hannah Giorgis asks, “Who will support victims when abuse is not recorded and pre-packaged solely for our consumption but subtle and drawn out, or when the state itself commits violence?”

And who will demand justice and accountability from Ray Rice, but also from those who provide the oxygen and nourishment that allows domestic violence to live and flourish? Who will challenge a culture of excuse-making that both blames and victimizes all too many women? Who will support Janay Rice and so many others, because we have seen enough?