#FergusonFridays: If it wasn’t for the women…[i] – The Feminist Wire

The reality is that the women and girls are the fabric of the community and hold all together. The women usually think and work for the whole, and daily confront death-dealing forces, internal and external, on behalf of the flourishing of the collective. As we know this radical politic isn’t televised or acknowledged, and most often erased, muted, or invisibilized. There is so much to unearth here when we centralize these bodies and voices. — Karlene Griffiths 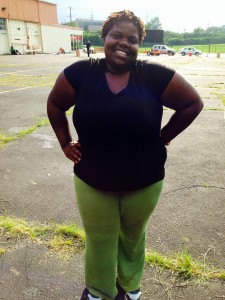 Several weeks ago while in Ferguson, MO with Black Life Matters Ride, I had the honor of meeting Jameila White. After a day of protesting, some of us retreated to a community barbeque while others traveled to St. Louis County prosecuting attorney Bob McCulloch’s neighborhood to continue political demonstrations. Concerned about white fear, hostility and vigilantism, I chose being in community with the folk of Ferguson. It was an amazing experience. The sun was hot. Brown skin glistened. Food and beverages overflowed. The music was right. And the community was welcoming.

But one thing remained on everyones mind: justice for Michael Brown. And more, a history of socio-political disenfranchisement that created the context for Brown to be murdered in the first place. I spoke with a range of community workers that day. But none captured my attention quite like White. A petite sista with rich deep chocolate hues, the embodiment of Fannie Lou Hamer’s famous words, the fighting spirit of Sojourner Truth, Harriet Tubman, Frances E. Harper, Ida B. Wells Barnett, Mary Church Terrell, Angela Davis, and Assata Shakur, and the big piercing voice of Ella Baker.

While standing around talking in the 90 degree plus heat, White waxed and waned poetically and politically about the history and infrastructure of Ferguson; police corruption, negligence, violence and exploitation; civil disobedience; the grandstanding of certain black celebrity leaders; the unexpected love and support they received from entertainers like J Cole and Benzino; and the too often silenced experiences of the black women in the community—the mothers, daughters, and sisters of the slain and abused. And, the survivors of systemic and interpersonal violence themselves. 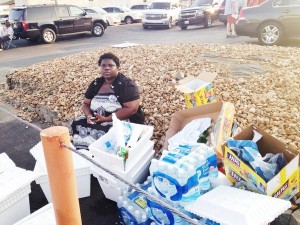 White fearlessly recalled several stories about black women and girls disproportionately being arrested for petty crimes and thrown in prison when they could not afford to pay city fines and court fees. She had an unassuming political savvy about her. She spoke of incarceration rates and how the unfair jailing of black folk not only fueled the local economy, but heightened black women and girls’ vulnerability to physical and sexual exploitation. She lamented that black women and girls were abused while incarcerated. And that these abuses and incarcerations impacted families and entire communities.

Everybody is impacted. Not just us. This is bigger than Ferguson. But no one will listen to me. The big names come and grandstand. But they don’t do anything but take pictures and leave. We need help. The police are corrupt. They don’t want us to protest. When we try to gather, they make us walk in a circle! When we get arrested, we get raped! And then we can’t vote or work. We can’t take care of our families. We’re tired. And we know when y’all leave they gone beat our asses. But we’re still gonna fight. But who will listen to me? Nobody is listening to what I have to say. I have something to say. — Jameila White

I was listening. White’s passion was captivating and her voice boomed. The narrative she told about exploited black flesh both sustaining and being marginalized in Ferguson is a common one. It’s the American story. It’s the story of black susceptibility to a range of social risk factors that in turn lead to desperate methods of survival that are then criminalized. This is the story of breathing while black. And it impacts generations. And not just black men and boys. It overwhelmingly affects black women and girls too. 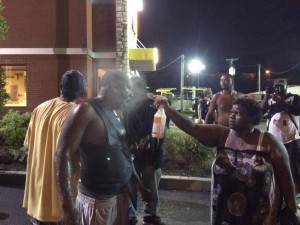 White soothing the eyes of a man suffering from mace burns.

But the underlying message in White’s narrative is also true: many simply will not hear what she has to say. Unfortunately, there is a long and documented history of black women fighting on behalf of and simultaneously being ignored within black social movement. White stands among a long line of storytellers. Like Mary Helen Washington, Paula Giddings, Deborah Gray White, and Darlene Clark Hine, White makes visible the deeds, lives, sufferings and thrivings of black women, too often made absent.

Their concerns and historical contributions are often sidestepped in historical and communal narratives that gain their power and precedence through the production, centralization and circulation of black boogeyman counter-narratives on the black male savior figure. But truth is, black activism and thriving has always constituted a multitude of hands, from young to old, and this has never looked like black patriarchal heroicism in reality. And while I get the desire to re-appropriate the patriarchal narrative to include black masculine super powers, if it wasn’t for the women…

As White reminds us, we don’t need black super heroes. Social movement requires everyday folk willing to put in real work. And black women have always partnered in this work — on the frontlines. They’ve been the leaders of civil disobedience, the organizers, the liberators, the cooks, the politicians, the childcare, the healthcare providers, the spiritual leaders, the laundresses, the teachers, the banks, and the social services—on and off the battlefield. Their story is the American story. And we’d all do well to not only listen, but take copious notes. 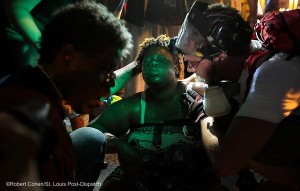 White after being maced by the police.

As we were parting ways I learned something else about White. She’s the woman I read about prior to traveling to Ferguson. She’s the “Good Samaritan” who “walked a mile to hand out water and snacks to protesters…and wound up being maced.” I had no idea. She’s also a mother. And a revolutionary. And she’s still marching, protesting, strategizing, bringing supplies, and speaking truth to power. You can follow her on twitter  — or in the streets of Ferguson.

[i] This article is indebted to the historical contributions of Mary Helen Washington, Darlene Clark Hine, Paula Giddings, and Deborah Gray White, and the ways in which they fervently inserted black women’s stories in the belly of the historical narrative of North America. Simultaneously, the title of this article is inspired by the significant text If It Wasn’t for the Women…: Black Women’s Experience and Womanist Culture in Church and Community by Cheryl Townsend Gilkes.