Anti-Feminists and the Continued Backlash Against Suffragettes – The Feminist Wire

Home / Feminism / Anti-Feminists and the Continued Backlash Against Suffragettes

Anti-Feminists and the Continued Backlash Against Suffragettes

Last week this lovely gem made its way around my internet feeds. The Buzzfeed list features 14 women, holding up signs that note why they “do not need feminism.” These pictures were posted on the Facebook page “Women Against Feminism,” and are meant to mockingly mirror an ongoing feminist campaign that asks women to name the reasons they need feminism (still). To generalize, the common threads found in the Women Against Feminism (WAF) post were that feminism demonizes men, gives women more rights than men, or sees women as superior, and  (somehow at the same time) victimizes women by not allowing them to “take responsibility” for themselves. Some of my “favorite” quotes include:

“[feminism supports] the systematic oppression of men and their rights. Victimizing women and making us seem gullible and feeble minded, instead of the sensual, sexy…strong women some of us still are”

“I believe in equality, not Entitlements & Supremacy” 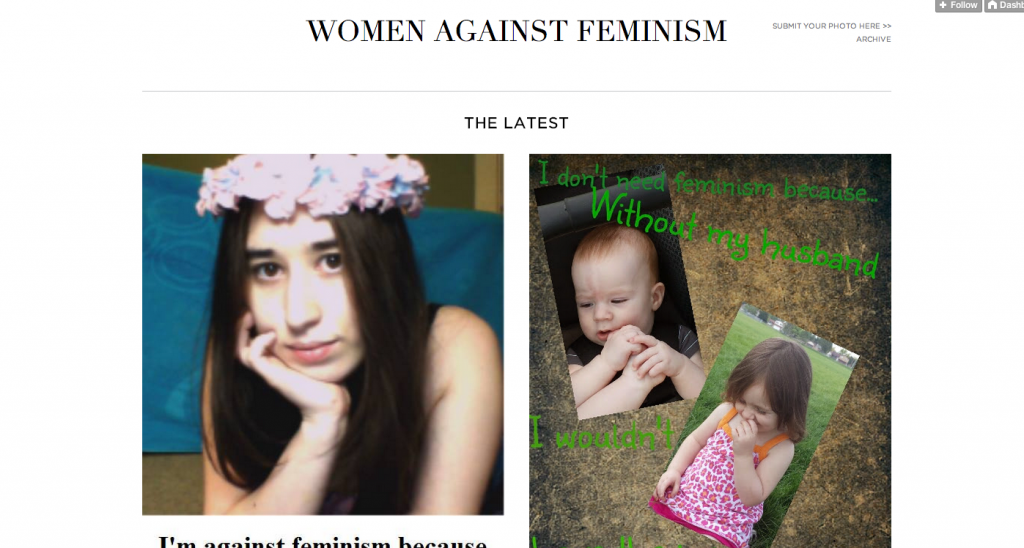 Upon reading this list and scrolling through the Facebook page, I was immediately reminded of a clip another friend had shown me a few months back. If you have a strong stomach you can watch “Feminism 2.0,” produced by Prager University (a private Christian College). This video explains how feminism needs to reinvent itself as a movement that would teach women to value being wives/mothers over having careers, say no to sex (unless married), and respect men as the benevolent granters of suffrage and household appliances. No kidding. This vomit-inducing sentiment is shared by the so-called “Princeton Mom” who has been making the talk show circuit rounds, insisting that young college-age women use their skills to catch a man while they are still young and attractive! Likewise, long time anti-feminist bullhorn Phyllis Schlafly recently complained how feminists are “at war with nature” for believing girls should get training in the math and sciences. From the Schlaflies to the sign-holders of WAF, antifeminists rear their perfectly coiffed heads from time to time to remind everyone that there are still women interested in dating conservatives. That, or more likely, the women’s movement still has work to be done.

In my role as an adjunct college professor of women’s studies courses, I come across these types of beliefs about feminism all of the time. In fact, many of my students begin my class with similar attitudes. It is my hope that, at the very least, they leave with a better appreciation of the complexity and history of feminism. Feminism, as a movement, has had its own struggles for definition–always against the backdrop of a strong and never-ending campaign of anti-feminist propaganda. Rather than discuss how feminists are varied in their beliefs and practices (a great description found here), or how feminists have sought out different priorities in the past, I find it much more instructive and entertaining to point out one thing: that the arguments anti-feminists cling to so dearly are the same old tried and true anti-suffrage arguments of yesteryear.

The term feminist grew out of the French women’s suffrage movement. A cursory examination of newspaper articles in the digital Library of Congress archive shows the word feminist being used somewhat interchangeably with suffragette/suffragist by the early twentieth century. The term suffragette was the more commonly used in in anti-suffrage propaganda. Anti-suffrage propaganda could be found in newspapers, magazines, pamphlets, and even postcards. When the feminist movement grew out of the successes of the suffrage movement, the already existing negative tropes about suffragists were recycled and adopted by antifeminists. In fact, the resemblance between century-old anti-suffrage propaganda and today’s modern anti-feminist propaganda is quite remarkable! 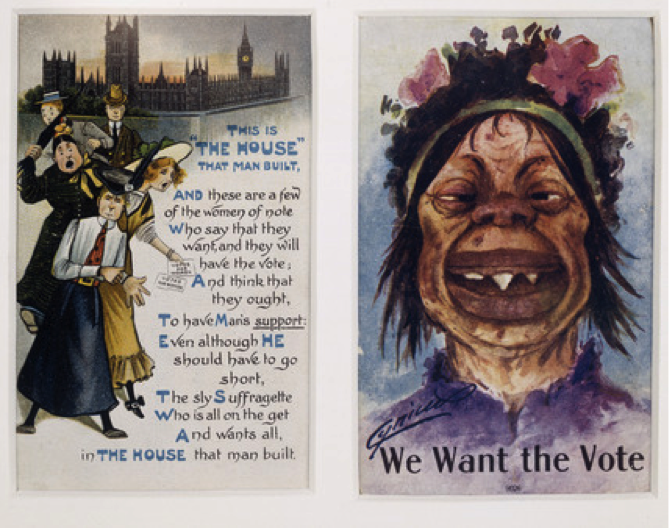 In the above image readers are given a jaunty poem about women wanting the vote and having man’s support in “the house that man built.” The woman featured on the right side of this picture shows the ugly beast-like suffragette. Her teeth are sharp and pointy, ready to take a freedom-loving bite out of men; her gaze insipid and slow. The text reveals the tenor of the masculinist beliefs about society (the “house” built by man, ha!) and reminds me of the line in the Feminism 2.0 video (referred to above) that begs the viewers to remember that it was “men who gave up their political monopoly” to women. 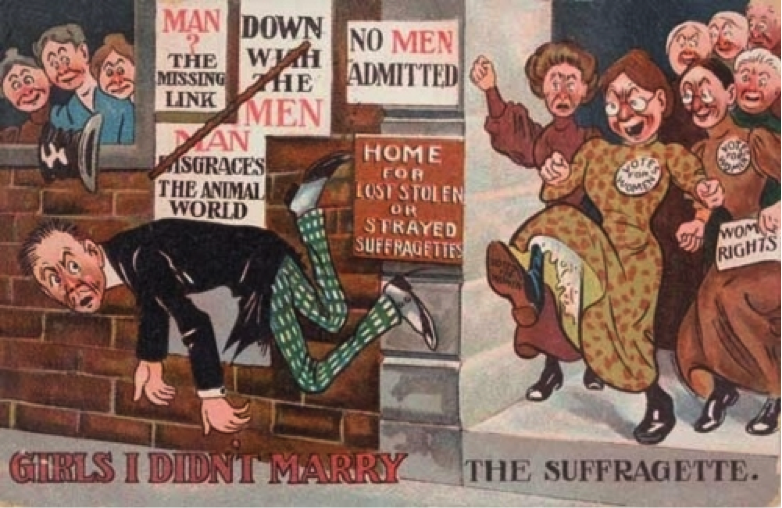 Likewise, in this next image we see that suffragettes are again shown as ugly, old, and unmarried women who are kicking men to the curb! The suffragettes’ “home” features signs reading “Down with The Men” and “Man Disgraces the Animal World.” We can see how the ideas from the WAF post that feminists want to victimize, discriminate, or otherwise devalue men are simply reiterations of old anti-suffrage smear campaigns. 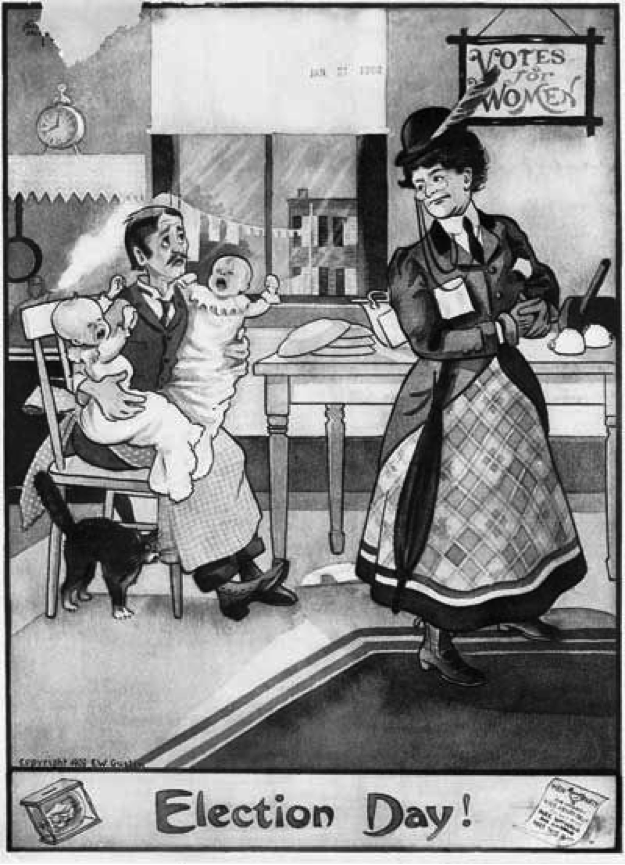 Another common fear amongst those in the anti-suffrage movement was that women’s enfranchisement would bring about a complete reversal of the gender order. In other words, men would be treated like women and have the same expectations placed upon them! Gasp! The women’s movement did, eventually (in the past 20 years), make moderate gains in terms of leveling-out gendered expectations of care/housework, but nothing approaching the complete reversals depicted in cartoons like this one. Images like these, along with images of women wearing pants while their husbands wear dresses/skirts, were meant to drive the point home: women who want equality between the genders really want to become men! Furthermore, because in a patriarchal society men are constructed as superior to women, many assumed that women might want to take the position as the superior gender (regardless of what they actually claimed to have wanted). This old idea is so cemented in the worldview of the modern anti-feminist movement that it has become the main trope of contemporary anti-feminist propaganda! 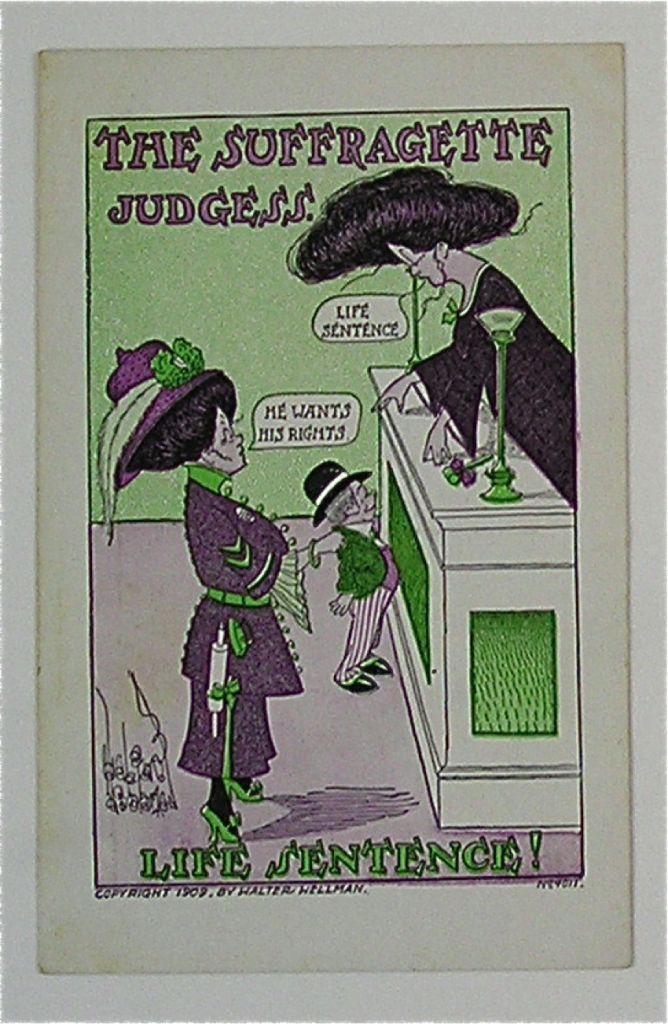 The above last example comes from an anti-suffrage postcard (circa 1902) and illustrates how suffrage was equated with taking away men’s rights. I commonly hear from anti-feminists that “the pendulum” of civil rights has swung too far in the other direction. The fear that we have entered into a matriarchal society completely opposite to a patriarchal society (you know, one that mirrors the original society only it everyone is evil and has maniacal goatees) is as laughable as many of these postcards and illustrations. Nevertheless, this rhetoric is constantly waved around by MRAs and other anti-feminist groups alike.

Rather than regurgitate old stereotypes about suffragists the proponents of the current anti-feminist movement need to get a new shtick! Maybe they can team up with that Ancient Aliens crazy hair guy and find a way to link feminism with other out-of-this-world conspiracies; something that would be less easy to disprove than the anti-suffrage/feminist tropes about feminists! I have even included a few for inspiration:

Tiffany Lamoreaux, Ph. D. is an adjunct professor of Women and Gender Studies. Her research interests include sexuality; race and class; race and gender in science fiction; gender, science, and technology; and the history of women’s work.