A Tribute to Sally Gross – The Feminist Wire

A Tribute to Sally Gross

Editors Note: We are deeply saddened to announce the passing of radical and revolutionary South African activist Sally Gross. We can’t think of a better forum than the Audre Lorde global forum to pay tribute to another warrior upon whose shoulders we also stand.

It is not our differences that divide us. It is our inability to recognize, accept, and celebrate those differences. ~ Audre Lorde

Many of us around the world are grieving the passing of Sally Gross. We have lost a great soul. Sally gave her whole life to the struggles of our time – she will be remembered for her immeasurable contribution to intersex rights in South Africa, on the continent, and internationally. She is responsible for getting intersex people legally recognized for the first time. Before the changes that she fought for over a period of years, intersex people were not protected or recognized as fully human under South African law. Although South Africa’s Constitution is the most progressive anywhere and protects the rights of all persons, Sally uncovered the fact that the word ‘person’ in law applied only to persons born unambiguously male or female.

The blind spots around sex and gender and enforcement of the gender binary, like so much other ignorance and prejudice – racism and hetero-normativity for example – are often traceable in the global south to colonization. For some clarity I quote Sally:

“There is a cultural specificity about the ignorance and inability to take information about intersex on board. The traditional cultures which originated in Siberia – these include native American cultures, north and south, do not have this problem, for example, and indeed actually revere the intersex. In our dominant contexts, however, the ignorance and cognitive blindness is the rule, and I will therefore begin by explaining what intersex is.

When a baby is born, the first question customarily asked is whether it is a baby boy or a baby girl. In most cases, the question can be answered easily after a glance between the new-born baby’s legs. In some cases, however, it is not straight-forward, usually because the external genitals of the baby are ambiguous, male-like in some ways and female-like in others. Sometimes the external genitals look clearly male-like or clearly female-like, but it becomes clear later that things are not so straight-forward in physical terms. (…) This is sexual differentiation which does not follow the usual paths of male and female, but which falls somewhere in-between.

(…) In our societies, sadly, there is profound ignorance about intersex. Those found to be intersexed are deeply stigmatised, and being intersexed can have lethal consequences. This echoes attitudes which remain common in the so-called “First World”, though it is to be hoped that these are shifting. The propensity to see people who are intersexed as monsters is often considered to be something dictated by the very order of nature. It is not, any more than the North American lust for iPods is part of the natural order.  Attitudes towards intersexuality and the intersexed has differed historically in different cultural contexts and in different times. This tells us that these attitudes are a matter of culture rather than of nature.” ~ from ‘Intersex, Status and the Law in South Africa and Africa’, by Sally Gross

Sally Gross deserves to be remembered and honored, written about and paid tribute to as befits her immense contribution to South Africa as well as to intersex rights internationally. She was part of the anti-apartheid struggle here, had to go into exile when, in 1977, a document she had drafted was leaked, putting her life in immediate danger. Sally was also deeply committed to the Palestinian struggle having been brought up Jewish and having lived in Israel for a time. 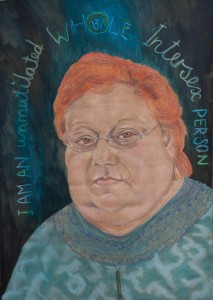 “I am an unmutilated, whole Intersex PERSON” Sally Gross by Gabrielle Le Roux 2013

I was lucky enough to have Sally as a beloved friend and honored that she agreed to collaborate with me on a series of portraits intended to pay tribute to, articulate and remember her work.  We had done the first two over a series of several months last year.  She had decided what she wanted to wear for the third one – a garment that needed to be made specially, akin to what she wore as a Dominican priest but in a strong shade of deep pink.  She planned to write in the background about her experience of vicious rejection and victimization by the church when she came out to them as intersex – a massively scarring experience for her.  One of her dreams was that she would share her experience with the church in a way that would make them change their policy on intersex people.  To this end she recently wrote to the new Pope as she hoped that, with a more humane world view than his predecessors, he might make some significant changes when he heard about the devastating impact on her of their prejudice.

Sadly and as a final injustice that underlined her social exclusion and marginality in spite of her contribution and the many people who knew her and appreciated her work, after a struggle to find more support for herself, and the clear sense that her life was ending, Sally died alone at home in precarious circumstances. She was last seen by her neighbors and was believed to have died on February 11 although her house was not opened and her body found till the evening of February 14.

There was a campaign that various activists, Mani Mitchell in New Zealand and Jane Bennett and myself in Cape Town, had begun from which her last months were supported.  I would like to thank all the people who managed to contribute. A decision has been made by international intersex activists to continue the campaign and use funds raised to support other activists who find themselves similarly without recourse.  Please contribute here: http://www.gofundme.com/6gc520

People are invited to share their tributes to Sally to be read out at her memorial in Cape Town on 26 February here: https://www.facebook.com/events/230280247155149/

The portrait of Sally Gross featured here is part of the Queer & Trans Art-iculations exhibition at Wits Art Museum, Johannesburg until March 30, 2014. This is a joint exhibition of Zanele Muholi and Gabrielle Le Roux’s work.

Gabrielle Le Roux is a South African artist and activist for social justice.  Her current work with transgender and intersex activists focuses on portraits and narrations of lived experiences.  It is rooted in the conviction that we change each other’s lives with our stories and that people who speak first hand about an issue do so with authority and are the ones who should be listened to most closely.