A Woman Speaks by Cheryl Boyce-Taylor – The Feminist Wire

A Woman Speaks by Cheryl Boyce-Taylor 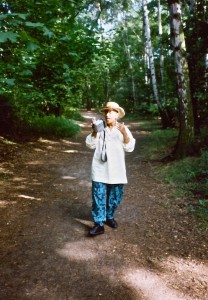 I pick a bunch of hibiscus blooms.

What lessons shall I learn from the spell of their senses?

For a long time I wanted to be a poet, but I was insecure about my writing, and often talked myself out of that dream. I was hard on myself. The thing I loved as much as poems were flowers, I knew that there was something to be learned by observing them.

On my night stand that year

I placed a bunch of red, peach and white amaryllis blossoms

some with their tongues already peering out

pushing ever so slightly into the vortex of the room

I first met Audre Lorde at a gathering at Hunter College in New York City, the event was held to name a student library in her honor. I was in love with her poetry, but very scared and intimidated by her larger than life presence. She was not only brilliant, she was brave, fierce and absolutely stunning. At some point in the evening she came over and introduced herself to me. I told her that I was a novice poet; the truth is, by then I had been writing for many years, but I was almost speechless in her presence. We chatted a bit, and to my surprise she took an immediate interest and invited me to take a women of color class she was offering that fall. I began to stammer and tell her that I was not a student at Hunter. She did not bat an eye; instead she said, That’s no problem, I’m giving you a personal invitation. I am looking forward to seeing you then. She smiled, and in that alluring Caribbean accent of hers, wished me a fine evening. My heart was beating outside of my chest I am sure. During the weeks that followed I decided that I was not going to accept her invitation, because I was not a real poet.

I think that I may be experiencing a change of heart. Today I read poems from the Black Unicorn. It reminded me of how much I want to be a poet, a bad ass, grown woman poet like you.

I have been woman

for a long time

I am treacherous with old magic

and the noon’s new fury

with all your wide futures

they hang heart and lungs

I wrote a new poem today, I cannot wait to read it in your class tomorrow.

the girl whose hands I wear

will learn to eat poems

her bistre-brown nipples   how her bare chest rose and fell

the pillow wet with our woes

how our fingertips swelled rolling rough against the ocean of words

earth opened her mouth belched up her tethered roots

Her voice opening the door of day

I wanted her words to heal/hold me

I sipped her Candombe

lit the room with Kora and white sage

Is that not what it takes to be a poet?

On the first day I arrived at Audre Lorde’s class without any poems. In my anxiety to make class, I forgot my poems at work. She called on me first to share a poem. With deep embarrassment I told her I had forgotten them. She asked me what kind of poet I was to come to class without my work. I was humiliated. I wanted to cry, but I never forgot my poems again, not then, not now. Audre told our class that Poetry was not a luxury. She said, we should use words as weapons, or not use them at all.  That night she asked: What would happen if you wrote the things you really wanted to say? Who is holding a gun to your head and preventing you from saying the things you must say?

In that moment I began to sob. I knew that I was the one holding the gun to my own head. There was weeping around the room then Audre asked, so who’s going to bring the tissues?

That year I worked harder than I ever did before, at the end of class Audre asked me to visit her in St. Croix. I did not go to St. Croix. I was too afraid. That remains one of the biggest regrets of my life, but I learned a lot from that experience. Years later, one of Audre’s friends told me that Audre really admired and loved my use of Trinidadian dialect in my work. I wrote a poem for Audre, and got a chance to read it to her at the I Am Your Sister International Conference, held in her honor. The poem is one of my old signature poems titled, A Dyke In A Dress. It was one of the last times I saw her. I am so thankful for the lessons I learned from Audre, I am still trying to be the hard working and truthful poet she saw in me so many years ago.

Whenever I lose my way, or need reassurance I turn to Audre’s words. I especially love the last verse of the following poem.

in many different colours

I look into my own faces

if we do not stop killing

the self that we hate

soon we shall all lie

in the same direction

and Eshidale’s priests will be very busy

they who alone can bury

all those who seek their own death

by jumping up from the ground

and landing upon their heads. 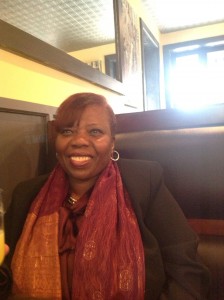 Born in Trinidad and raised in Queens, New York, Cheryl curates The Calypso Muse Reading Series and The Glitter Pomegranate Performance Series. The author of three collections of poetry, Raw Air, Night When Moon Follows, and Convincing the Body.  Cheryl’s work has been commissioned by The National Endowment for the Arts and The Joyce Theatre for Ronald K. Brown’s/Evidence Dance Company. A graduate of Stonecoast MFA Poetry Program, her poetry has been widely published in literary journals such as: Callaloo, Caribbean Erotica, So Much Things To Say:100 Calabash Poets, Adrienne,  Aloud:Voices from the Nuyorican Poets Cafe, The Mom Egg Review and Pluck! Journal of Affrilachian Arts and Culture.