Claiming All That Is Within Me And Loving Myself Fiercely 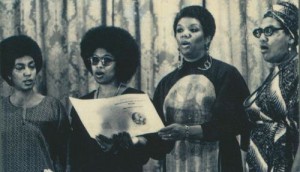 I was named by my mother at birth in the presence of my grandmother, keeper, vessel of the Gods and Goddesses, descendent of over a hundred generations of holy-ghost women, rainbow serpent women, wrinkled skin ancestral Mambos (high priestesses of West-African Vodoun) whose eyes foresaw my happenings before I could utter a word, whose arms remain outstretched before me, and words exist softly, collectively in my ear whenever I am willing to hear them, to listen to them. It is in that listening and within those internal spaces I allow myself, Black, feminist, African, Haitian, American, immigrant, lesbian, survivor and so much more, to love myself for all that I am and all that I have been even before my feet touched the earth. It is in those internal spaces I am fully and completely in love and with love, filled with the sweet lullabies of my greatest grandmothers, and it is in those moments that I love myself most fiercely in a world that reminds me in so many ways that I should not.

I had forgotten, for a while a least, what it meant to fully love myself, all of myself, including the parts denied, entrapped within a politics of shame. I had forgotten all of it, until I began to write the script for Mother Tongue: Monologues for Lesbian Ancestral Wives in 2013. In my search for inspiration I was led to the “Call” by Black, lesbian, mother, warrior, poet, Audre Lorde.  From her lips, her pen and her papers, the Call entranced me as would ceremonial drum beats, with every stanza meant just for me. I was liberated. I was liberated for the hundredth time as we all often repeatedly need that kind of liberating as Black folk, as women folk, queer folk, repeatedly, in order to loosen the societal and self-imposed ropes from around our mouths and in order to peel back layers of silence and the denial of love for ourselves and all that we are. This was a “Call” to remember, a “Call” for truth, a “Call” to speak the unspeakable, the ultimate utterance of love to and from myself, and from a hundred generations waiting for me to speak this love within their holding, within their embrace.

Holy ghost woman
stolen out of your name
Rainbow Serpent
whose faces have been forgotten
Mother    loosen my tongue or adorn me
with a lighter burden
Aido Hwedo is coming.

On worn kitchen stools and tables
we are piecing our weapons together
scraps of different histories
do not let us shatter
any altar
she who scrubs the capitol toilets, listening
is your sister’s youngest daughter
gnarled Harriet’s anointed
you have not been without honor
even the young guerrilla has chosen
yells as she fires into the thicket
Aido Hwedo is coming.

I have written your names on my cheekbone
dreamed your eyes    flesh my epiphany
most ancient goddesses    hear me
enter
I have not forgotten your worship
nor my sisters
nor the sons of my daughters
my children watch for your print
in their labors
and they say Aido Hwedo is coming.

I am a Black woman    turning
mouthing your name as a password
through seductions    self-slaughter
and I believe in the holy ghost
mother
in your flames beyond our vision
blown light through the fingers of women
enduring    warring
sometimes outside your name
we do not choose all our rituals
Thandi Modise    winged girl of Soweto
brought fire back home in the snout of a mortar
and passes the word from her prison cell    whispering
Aido Hwedo is coming.

Rainbow Serpent who must not go
unspoken
I have ottered up the safety of separations
sung the spirals of power
and what fills the spaces
before power unfolds or flounders
in desirable nonessentials
I am a Black woman    stripped down
and praying
my whole life has been an altar
worth its ending
and I say Aido Hwedo is coming.

I may be a weed in the garden
of women I have loved
who are still
trapped in their season
but even they shriek
as they rip burning gold from their skins
Aido Hwedo is coming.

We are learning by heart
what has never been taught
you are my given    fire-tongued
Oya    Seboulisa    Mawu    Afrekete
and now we are mourning our sisters
lost to the false hush of sorrow
to hardness and hatchets and childbirth
and we are shouting
Rosa Parks and Fannie Lou Hamer
Assata Shakur and Yaa Asantewa
my mother and Winnie Mandela are singing
in my throat
the holy ghosts linguist
one iron silence broken
Aido Hwedo is calling
calling
your daughters are named
and conceiving
Mother    loosen my tongue
or adorn me
with a lighter burden
Aido Hwedo is coming.

-Audre Lorde (From Our Dead Behind Us)

In 2013, I handed a copy of “Call” in written word on paper to three sisters ready to take the production stage with the intent of sparking a community to remember, to remember the names of the ever present ancestors who loved them for all that they are. I remembered my grandmothers and my great grandmothers and began to relish and to love every moment as I am— Black woman, lesbian feminist, African, Haitian, American, survivor, and first born daughter and granddaughter to a hundred generations of holy ghosts linguists. I remembered that I’ve born witness and survived. I remembered I love myself fiercely.

This was the first time in my entire life I had ever written a love letter to myself. I wrote it wholeheartedly for me and it is a continuing process. I/We are more magnificent! I/We are more loving and powerful beings because you, Black, lesbian, mother, warrior, poet, Audre Lorde illuminated the way. 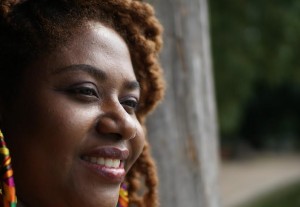 Farah Tanis is a transnational feminist and human rights activist. She is co-founder and Executive Director of the national Black feminist organization Black Women’s Blueprint. She launched and Chairs the first Truth and Reconciliation Commission (BWTRC) in the U.S. ever to focus on Black women and their historical and contemporary experiences with sexual assault.  Tanis is a 2012 U.S. Human Rights Institute Fellow. For the past seven years she served as Almoner for the Havens Relief Fund, was on the Board of Directors of Haki Yetu working to end Rape in the Congo region of Africa and the Board of Right Rides which provides safe rides home to women and queer people in New York City. Tanis founded the Museum of Women’s Resistance (MoWRe). Currently housed at Black Women’s Blueprint, MoWRe is internationally recognized as a Site of Conscience by the International Coalition of Sites of Conscience. Farah Tanis created Mother Tongue Monologues (MTM), a vehicle for communicating Black feminist praxis at the grassroots and for addressing Black sexual politics in African American and other communities of the African Diaspora.