On Audre Lorde – The Feminist Wire 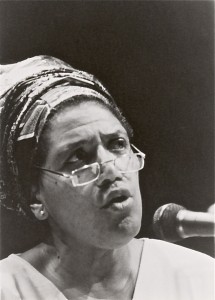 Professor Paula Cooey introduced me to the writings of Audre Lorde in a “Women, Religion, and Literature” course at Trinity University in 1984. I transferred to Trinity from Alabama State University. I moved to San Antonio with my then-husband because he was in the Air Force. In Dr. Cooey’s class, I opened up to a whole new world. I grew up Christian and fairly closed off to a larger world, growing up as I did in the rural south of central Alabama. I should say I was not closed off because of my mother. She strove to whet her children’s appetites with a desire to experience the entire world. I wanted that, but in 1984, I had not yet experienced much of the world or of different worldviews.

Dr. Cooey didn’t introduce us to Lorde by explaining who she was or how she showed up in the world. No, she told us to read. The first essay I read from Sister Outsider was “The Uses of Anger: Women Responding to Racism.” New to feminism and black feminism, I soaked it up. I was being brought to conscienctization without realizing it. Cooey didn’t wave a flag. She just lived her feminism. And she did it by introducing us—I was the only black student in the room—to Audre Lorde.

At some point in our discussions regarding Lorde, Cooey mentioned Lorde was lesbian. I was repulsed. In 1984, I had never had to confront my homo-antagonistic attitudes. In fact, I didn’t know I had them. At the same time, Cooey had us read Alice Walker’s The Color Purple and her definition of a womanist at the beginning of her collection of essays, In Search of our Mother’s Gardens: Womanist Prose. Pushing pass my prejudices, I became ravenous for Walker’s and Lorde’s writing. I became fascinated with their lives and my own growing respect for their fierceness. And, as a poet, I loved Lorde’s work. Period. No questions asked. 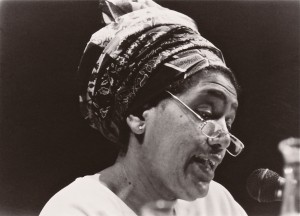 It is this first contact with Lorde that expanded my theological and social worldviews. I suddenly became deeply aware of the language I used and that others used about lesbians and gay men. I had no language for bi-sexual, transgender, or intersexual persons, for queer folk. I had never considered anything other than heterosexual realities. This lone consideration was itself problematic, given that I had—even as a young child—“known” that people just love whomever they love. But my evangelical/holiness Christian background meant that only certain love was legitimate or godly. But there was Audre Lorde, living her life and writing about it and from it. She was not Christian, nor was she heterosexual. But she was very compelling.

From that initial academic encounter with her, I followed Lorde’s writings. I have every book of her poetry and all her essays. She became one of my conversation partners in my head and in my writing. I always wondered what she thought about everything. I fell deeply in love with her truth-telling. And it scared me. How was I, also a young Christian minister, ordained by 1985, going to explain my fascination with her and my belief that she was telling the truth in a way that I had not known people to tell it? Over the years, I relaxed and every now and then thanked God for Cooey making that initial introduction. I don’t know that I could have met bell hooks or Katie Cannon or Alice Walker or emilie townes without Lorde. She was my midwife into a feminist/womanist life. And meeting her, I learned another side of my Christian life. I had to learn to wrestle and not just take what someone said to me about anything. I try to live “your silence will not protect you.” Lorde convinced me of it.

The day she died, I wept like a child bereft of her mother. I was at the Academy of American Religion, in a Womanist session. And I wrote a poem on the spot. It was the only offering I could have made for her. She is among the constellation of sheroes of my life.

I knew her in my body
hot with the writhing
of power welling up
and flowing down my legs
to nourish the earth
and all my lovers.

She taught me to love the power,
embrace the pain–
be in charge.

I did not know her
but I did

I knew her in my heart
torn with the ambiguities
of living between, outside
the known world,
diving deep and walking away
from my heart to claim
the cosmos
as my own–

to love men and women,
separate, together, whenever
without backing down
from the power.

I did not know her
but I knew her well. 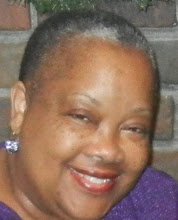 Rev. Valerie Bridgeman, Ph.D., is a Womanist biblical scholar (Hebrew bible) and ordained Church of God minister. She has been in ministry 37 years. She is a peace activist, having worked among gang members using art to quell violence. Valerie is founding president and CEO of WomanPreach! Inc., an organization designed to bring preachers to full prophetic voice.