“the articulation of a theory is gathering place, sometimes a point of rest as the process rushes on, insisting that you follow” Barbara Christian
Entanglement is theory’s condition of possibility

Personhood, the Human and individuation are all scenes of subjection

What is throwing shade but a black queer refusal of the Enwhitenment? shade as critical darkness

After the end of the world:

Don’t you love how answer to end of our anti-black, anti-queer/trans, settler colonial & capitalist world is Elon Musk giving it an afterlife on Mars?

Now that Elon Musk is on Trump’s advisory team does that mean we get to send the White nationalist House to Mars? Bye technofascism!

“we have to live out the human if we are to move on to our own future” Samuel Delany — the Einstein Intersection, the original title of which was A Fabulous, Formless Darkness

Stealing away from the World

Comics pose the question how do the inHuman (as supernatural/mutant) relate to the Human, and yet this is already a question posed by black thought to the world

Following Coltrane, how to move & think “out of this world”?

The blackness of dystopia and utopia:

in an open relationship with Afropessimism

“We have to show the world that we are numerous.” Sylvia Rivera, a grammar of the trans multitude.

Shaved goatee: it was too much gender trouble

the hope of Afropessimism

It was the animal(s) that allowed the human to take “one small step….” into space

“For an octopus, its arms are partly self – they can be directed and used to manipulate things. But from the central brain’s perspective they are partly non-self too, partly agents of their own.” Peter Godfrey-Smith

Decolonization is an interspecies affair

Abolition is an interspecies affair

blackness is a way to re-think “the animal” beyond the human (as a refusal of it), through “invisible agency” (Frederick Douglass) & fugitivity

What of the animal after the end of the World?

What will entanglement be after end of World?

What of the animal in the undercommons? Undercommons ecology

matter is social, a gathering

“It’s after the end of the world: don’t you know that yet?” Sun Ra.

“No, blackness is not the pathogen in afro-pessimism, the world is. Not the earth, but the world, and maybe even the whole possibility of and desire for a world.” Jared Sexton

Books are a companion species.

reading done generously and receptively and promiscuously, reading as submission, reading as non-monogamy and resisting the notion that we must be married to any particular thought style/theory/philosophy

reading as polyamory: haven’t we all had so many lovers and don’t we continue to yearn for more???

reading as entanglement, as ontology, as being with, as becoming, as world(s)ing, as dividual, as beyond the threshold(s), as touching feeling

reading as being a bossy bottom: pleasure of text indeed 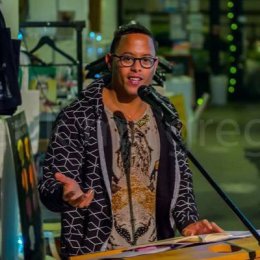 Che Gossett is a trans femme writer, an archivist at the Barnard Center for Research on Women and a PhD candidate in trans/gender studies at Rutgers.  They are the recipient of the 2014 Gloria E. Anzaldúa Award from the American Studies Association, a Radcliffe research grant from Harvard University and the 2014 Sylvia Rivera Award in Transgender Studies from the Center for Gay and Lesbian Studies at the City University of New York, and the 2014 Martin Duberman Research Scholar Award from the New York Public Library. Most recently, they received a Palestinian American Research Committee grant and are currently serving as a 2017-2018 Queer Arts Mentor. They are working on a book project titled Blackness, the Beast and the Non Sovereign.