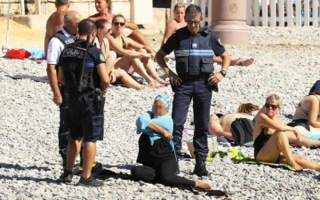 Armed police surround a woman in a headscarf on a beach in Nice, France. Photo Credit: Vantage News.

Women of Villeneuve-Loubet, a coastal town just South of Nice, France, had a reason to celebrate on August 26, 2016 as the Burkini Ban was overturned by the French Council of State.  The ban has caused controversy, particularly because of the above viral photo. The image shows Nice police hovering over a woman (who gave only her first name, Siam) and looking down scornfully as she removes the long sleeved cover up (not a burkini) she is wearing. According to Al Jazeera, the woman was then fined.

France is no stranger to Islamophobia. In 2004, the National Assembly approved a ban on religious veils and head coverings in public schools. While the ban wasn’t exclusive to Muslims, many, including Human Rights Watch (HRW), viewed it as “disproportionately” discriminatory to Muslim women and girls. It was enacted in the name of secularism, but, as HRW explains, “protecting the right of all students to religious freedom does not undermine secularism in schools.”

The current climate of Islamophobia across Europe and the Middle East has inflamed the existing tensions between strict secularists and Muslim citizens of the EU. In 2011, the burqa and niqab were banned in public and after the November 2015 Paris attacks, President Hollande declared a state of emergency. According to Yassar Louati at the Collective Against Islamophobia in France (CCIF), the state of emergency quickly “led to excesses [among the police and state prefects], which have led to concerns among human rights organizations.”  CCIF is currently dealing with 267 cases of abuse resulting from the state of emergency, including “discriminatory raids” and house arrests. In one brutal raid, police broke French-Moroccan M. Alami’s teeth before discovering they had targeted the wrong person.

The most recent attack in France happened in Nice on Bastille Day (July 16th), claiming eighty-five lives. After an assault on the popular seaside city, it may not be a coincidence that such a beach specific law emerged. Now, the law is being challenged across the coastal regions of France, beach-town by beach-town. People like Patrice Spinosi, representing the Human Rights League, hope the Villeneuve-Loubet decision will set legal precedent. However, the mayor of Sisco, Corsica says he won’t lift the burkini ban, citing “strong tension” in the town. And Lionnel Luca, mayor of Villeneuve-Loubet, also protested the court’s ruling, calling it “an additional step [in the] rampant Islamization” of France.

These kinds of bigoted sentiments are being echoed across France, all the way up to the National Assembly. Former President Sarkozy is making a political comeback, but his strongest opposition comes from the far-right party, the National Front. Sarkozy has been adopting some of the Front’s conservative attitudes and is likely to play on the same nationalistic impulses. According to Politico, Sarkozy has already said that he supports the ban on the burkini, calling it a threat to French identity. In spite of the country’s strong stance on secularism, he has made traditionalist statements that refer to France as “a Christian nation,” presumably to cater to Catholic conservatives.

In other words, Sarkozy’s Islamophobia might be a bid to win over xenophobic voters. Does this sound familiar? It should, because it was President Trump’s strategy too.  It’s not surprising that France’s Front party founder Jean-Marie Le Pen endorsed Donald Trump during the election.

For the Human Rights League (LDH), the Villeneuve-Loubet decision is a hopeful step, but it isn’t quite enough—a real victory will come only when the ban is repealed countrywide. For instance, on their website, the LDH issued the following statement: “This decision does not solve anything […] we reject this vision of France and we call women and men of this country to reject it.”

The suppression of women based on religious expression is a call that needs to be answered around the world. It isn’t just Sarkozy using xenophobia to win voters. Brexit proved that, when harnessed, this toxic mentality can topple a world leader and the US November election showed that it can institute an Islamophobic xenophobe too.

Trump’s Muslim Ban echoes the Islamophobia seen recently in Europe. The president released the first iteration of the ban on January 27, 2017, blocking entry into the US from seven Muslim-majority countries. While the executive order sparked protests at airports across the country, it also received widespread support: a Reuters/Ipsos poll conducted on January 30 found a seven-point margin of support for the ban before it was suspended in federal court. A revised version of the ban was issued on March 6. The changes make the order more defensible in court, but the 120-day entry ban on refugees is still in place (although the indefinite ban on Syrian refugees was lifted) and only Iraq was removed from the list of Muslim-majority countries banned from entry. Two federal judges, from Hawaii and Maryland, have since blocked the new order, and the President has stated that he intends to take the case to the Supreme Court.

When Trump first proposed a travel ban on Muslim-majority countries, prominent Republicans like Speaker Paul Ryan and Vice President Mike Pence vowed they would never support it. The fact that these politicians capitulated to Trump’s travel ban, that the ban receives public support, and that Trump’s fear-based campaign found traction in the first place, speaks to the strength of Islamophobia, both subtle and overt, in the United States.

Victories like the one in Villaneuve-Loubet, where public pressure against racist policies results in change, need to be resounding. Trump’s new travel ban is designed to be more defensible in court, and countering the fallout will require human rights advocates to use every tool at their disposal. Islamophobia cannot be allowed to dominate our beaches or our airports, our public spaces or our courts, and we cannot let it grow unchecked in our political system.

Amy Oldfield lives in Toronto, where she writes and teaches gymnastics. You can read her work in Symposium and ditch poetry.