“Something’s, like, crossed over in me
and I can’t go back. I mean I just couldn’t live.”

weary travelers and midnight lovers
speed on past the motel

search darkness for another place to lie

two shots of Wild Turkey
slide down my throat

although I never smoke
I crave a cigarette

the thrill of new heat
fills my body

If my husband could see me now
lightheaded and unzipped

his dutiful
once fearful housewife
gone

get an eyeful of him

his resting body splayed out
an offering to satiate my desire

hungrily I pull him to my mouth

a Lucky Strike for both of us

I leave him sleeping

unwrap a small bar of soap
lather my hands

think about my wedding ring
resting in the soap dish

*****
The idea for “Room 133” evolved through a series of personal events, beginning with me leaving an abusive relationship—one where I was expected to be submissive and compliant. The title for the poem was inspired by the room number Thelma Dickinson (played by Geena Davis) stays in with her young lover, J.D. (played by Brad Pitt) in the film Thelma & Louise (1991).

Although Thelma & Louise was released twenty five years ago, its message about rape culture, domestic violence, and socially engrained misogyny is still relevant. Thelma and Louise (played by Susan Sarandon) embody elements of feminism and give viewers an extreme glimpse of what happens when women move outside the rigid gender-roles they have been assigned. They also confront and disrupt culturally reinforced notions of masculinity and male dominance. Indeed, the film’s daring final scene (where the two women run their car off a ledge in the Grand Canyon) has become an indelible symbol for the lengths some women will go to in order to be liberated from abuse and male-centric culture. “Room 133” captures what it is like for a woman to embrace her own sexuality after having been the sexual property of an abusive husband who denied her a right to express her own sexual needs and desires.

While Thelma only experiences a brief sexual awakening, I wanted more for the female narrator in “Room 133,” which is why the poem is part of an in-progress full-length poetry collection (entitled Rusted Legacy—after Adrienne Rich’s poem of the same name) I have written that allows my female protagonist to grow in her understanding of her sexuality, confront the domestic violence she suffered, and unlike Thelma, experience liberation and sexual expression that is not cut tragically short.

What I have learned from my own experience with intimate partner abuse, and in volunteering for organizations that help people leave domestic violence situations, is that perpetrators of domestic violence often sexually abuse their victims, and more often than not, these victims have little outside sexual experience unrelated to coercion, brutality, and force. Thelma’s backstory confirms this when she tells J.D. she began dating her husband when she was fourteen years old, married him at age eighteen, and had no sexual experiences outside of this relationship.

Domestic violence perpetrated by men often reinforces outdated notions about female sexuality and, in particular that women’s bodies merely exist for male pleasure. Like her inspiration, my poetic version of Thelma Dickinson flips the script on this misogynistic notion, taps into her own sexual powers, and hopefully encourages other women to discover for themselves what all the fuss is about when it comes to having control over their bodies and their sexual desires. 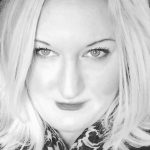 Journey McAndrews is a poet, essayist, and activist. Her work has appeared in Kudzu Literary Magazine, Motif, LILOPOH, New Verse News, Inscape, various journals and newspapers, and the HIV Here & Now Project. She received her MFA in Creative Nonfiction with a minor in Poetry from Spalding University. Journey has received an Individual Artist Grant from the Kentucky Foundation for Women, and an AWP Writer-to-Writer Mentorship. She has worked as a Writing Mentor and Writing Workshop Instructor at the Carnegie Center for Literacy and Learning, teaches Feature Writing and Editing for Journalism at Eastern Kentucky University, and is studying to become a Clinical Mental Health Counselor. She just completed a feminist-themed food memoir, I Eat My Peas with Honey, and is currently completing a hybrid memoir and a collection of poems that explores surviving domestic violence. She lives in Lexington, Kentucky with her two rescued cats—Catticus Finch and Boo Catley.