EMERGING FEMINISMS, That Why Question Again – The Feminist Wire

EMERGING FEMINISMS, That Why Question Again

This is an era in social consciousness when the knee jerk reaction to gender based violence is to attack the perpetrator, especially in situations where we’re direct witnesses to the violence. We’ve all seen those cam-videos wherein an abusive partner, often the man in a hetero-normative relationship, is violently attacked, or at the very least subdued, by other male witnesses. Rarely do the witnesses initially want to hear what led the man to abuse his partner; they just simply want the abuse to end.

However, in these same situations, as time passes, these once solid defenders of justice turn against the female victim survivor of that abuse they worked to end. The witnesses soon turn to hoisting questions such as, “What did she do to aggravate her partner?” like full-fledged weaponries in the war defending patriarchy.

With this questioning, it is clear that we haven’t stepped beyond the propensity to victim-blame. That initial knee jerk reaction to witnessing domestic abuse is symptomatic of patriarchy itself—it’s indicative of the very masculine hero-complex most men inadvertently fall into upon witnessing a “distressed female victim.” And not surprisingly, those same heroes rarely, if ever, jump in to defend male victim survivors of domestic abuse.

Take the Rihanna and Chris Brown situation, for example. We all cried at the attack against Rihanna, even the abuser amongst us loudly gesticulated against Chris’ actions. But now, over seven years later, most men I’m in conversations with want to know what Rihanna did to instigate the fight. Even the more critical of them further conclude that because Rihanna is notably boisterous and belligerent, she most likely deserved what she got. There is no way Chris lifted his hands un-aggravated. The implication in asking how she instigated the fight is a resulting paradox where victim survivors are themselves the provocateurs of their abuse. I frequently encounter this type of flawed, narrow-minded logic that rationalizes the culture of violence. This idea that there must be a justification to every gender based violent act implies that the victim deserved the violence inflicted upon her. Conversations on domestic abuse often transpire as such: “It’s wrong for a man to beat his girlfriend or wife—especially his wife—but what did she say? What did she do wrong?” And, as if that’s not offensive enough to the overwhelming majority of victim survivors of gender based violence, the patriarchal warriors might add, “there’s always a second side to the story.”

Because a woman’s word is predicated on the second side to the story, or on the ‘why’—why did he beat her? What was she wearing when he assaulted her? There must be reason behind her attack, and she must be conscious of that reason. Women name Bill Cosby as their perpetrator, and of course, they must be lying, or at the very least, Bill is innocent until proven guilty. Similarly, the Ghosmeshi trial in Canada, in which Ghomeshi was acquitted of four counts of sexual assualt and one count of choking—the word of twenty women wasn’t enough. When we say we’ve been victims of sexual assault, and even when our assertions may be validated, it still isn’t enough. Here’s a fact to bear in mind: 1 in 3 women will experience sexual abuse, and only 33 in 1000 sexual assualts in Canada are ever reported. And imagine—these stats are more than likely underestimates. So, why don’t we report more often? Well, for many reasons including religious and cultural obligations, but also because we’re afraid and tired of being asked how we provoked the assualt.

Excuse me while I ask: when we ever cared to hear from the side of all other perpetrators of violence? When did we care to know what genocide victims did wrong to deserve the evil inflicted upon them? Is that offensive? When did we ask, what on earth did the innocent victims of mass shootings do to offend the shooters?

So why do we revert to that question when analyzing victims of gender based violence? And why is this undeserving of a universal outcry?

This is why women are angry. Everywhere around the world, we’re livid, enraged beyond control at a system that has never had our backs.

While in Canada, a friend once asserted that the patriarchy there is worse than that in “developing countries.” Her reasoning was that we still encounter sexist and mysogyninst violence, though the system presents itself as a structure of equality.. At the very least, we don’t even benefit from chivalry. We split the bills with our male counterparts, and still hoist our pepper sprays close to the heart on our way home. Here in Nigeria, another friend of mine examined how to strategize and survive patriarchy in Nigeria. Women, she explained, seek to marry rich because, in their abuse, they’ll at least gain financial security, unlike the poor woman that gains nothing from her abusive partner. She has a point: 20% of Nigerian women witness physical and/or psychological violence at the hands of a spouse or a male relative. I mean, the facts are staggering.

So why shouldn’t the rage engulf us?

But the men I converse with never ask why women are so angry, why we’re fed up with the abuses of patriarchy, a system they purport privileges us just as much as it does them. Instead, they want to know what we did that was deserving of our abuse. 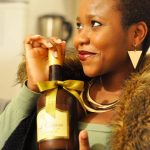 Chi-Chi Ayalogu is a Nigerian Canadian femme, with a BA in English Literature and a minor in Political Science. She currently lives, reads, writes, and explores in Nigeria with her partner. She can be found tweeting at @jijivisuals