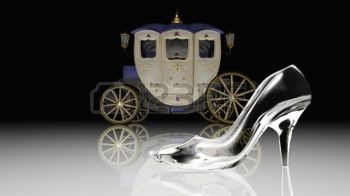 The wedding feast was fabulous, baked meats and swollen fruits, and she felt all eyes on her as she danced with her charming groom, and she saw light gather in the globes of the glasses as the champagne bubbled and the voices echoed their cheers.

She will need new shoes, and perhaps a new dress. She looks at the white wedding gown, its hem greying, the smudge of cake now a sticky brown smear across the heart, the wine spill a stain in her lap. Pure white, and blood red, and soiled brown.

She pushes her painful feet into the shoes and she looks at her hands. The nails are chipped now and she will need her hands nice for him, to smooth his brow and heal his aches and care for his every craving. Now she is his, she has his name; she wears his metal on her finger.

She watched him go early this morning with the men, the hounds baying, the horses heaving forward, their flanks steaming with sweat, the call of the horns breaking the still dawn silence wide open. She watched from the window as his bright red coat disappeared behind trees and he was lost to her.

She sits quietly now and thinks of the days before, how life had been so different, living with just the women. She remembers their cruel pinches on her skin, the spittle in her ear as they told her she would come to nothing; she was fit only to scrabble with her fingers in the hearth dirt. She looks around at the vast room, which is her chamber, the high domed walls, the smooth silk counterpane, the velvet hangings. She looks at the picture in the gold frame: it is him, in his regal clothes, all purples and furs. She sees a cruel twist to his mouth, which she hasn’t noticed before.

She nibbles on a sugared almond, and the taste is so thickly sweet, she spits it back into the bowl. It sits there, pale purple, stuck with saliva, wanted, now not wanted, now discarded.

She walks to the mirror and sits, yawning. Three images look back at her, one full on, two from each side, a three dimensional woman, languid and alone with herself. She brushes her hair; it is tangled where he twisted his fingers around it and pulled her towards his mouth. The tangles have become knots, and the knots snag and snatch in her comb.

She lifts the perfume bottle, and sprays its mist on her skin. She breathes in lilies and roses and she remembers the acrid aroma of her sisters’ scent, as they dressed for the ball. She recalls how their smell stuck in her throat like sadness as she watched them go, dressed in gowns of tightly wrapped satin, their skin seeping sweat against the taut coils which constrained their flesh.

She goes to the window. He has not returned: it will be hours until the hunters come back, blood-wet, and shouting for wine. She knows he will raise the flagon and sup deep and it will dribble from his lips and he will pull her to him and crush her face against his as he holds up his other trophy, hewn antlers or excoriated fur.

She looks down from her tower into the courtyard below: the carriage is empty now, no coachmen, no courtiers to bow low. The door hangs open, a rasping tongue. She wonders what she will do.

Her hand twists the gilt knob and pushes the door: the chamber leads out to a marble staircase, the banisters snaking down: she feels giddy and unstable and her toes totter and hurt in the shoes which bind her feet. She holds the rail and looks below. She wonders if she is allowed to venture but her feet are tender, held high on heels and each step is bloody and raw. She gathers the silk of her skirts and sits on the top step; her broken nails lift to her face and she digs claws into her cheeks until her fingers come away crimson. She tugs at the gown until it rips, a shudder, a sigh from the fabric as she tears the whole length. The shoe is stuck to her foot but she pulls and pulls until it comes away, the skin of her heel and her toes still attached. The blood is deep red, and it runs rivers down her sleeves and spreads stains in the silk. The other shoe, the same, the painful pulling, the parting of flesh, the dripping of red, and the foot is free.

In each hand she holds a glass slipper high and, one first, then the other, she hurls them down the marble staircase, hearing them shatter on the flagstones below.

She sobs, brings the ragged hem of her dress to screwed eyes and wonders if she was not better off when she slept in the cinders. She pulls hard on her arms to raise herself on her spattered stumps and, with a cry in her throat, she is dancing down the steps. 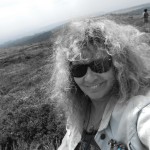 Judy Leigh has just written her first novel, Older, Wiser, Wilder, having completed an MA in Professional Writing. She also writes articles on political journalism and music and blogs about a variety of issues on her blog, That Quintessence of Dust, which can be found on judyleigh.com. Her essay “On Beauty, whatever that is” has been shortlisted by The Student Wordsmith for an award. When she is not writing, or sometimes when she is, she enjoys travelling, dancing on tables and in mosh pits, and generally making mischief.

Related Itemsbody politicsCinderellaCultureEducationFamilyfeaturedfeminismFictionGenderHealthHistoryPatriarchysexismviolence against womenWritingYouth
← Previous Story EMERGING FEMINISMS, What I Have Learned from the Women Who Have “Lost”
Next Story → Personal Is Political: Migrant Ironies: Migrants Hope for Life Without Limitations in Houston