EMERGING FEMINISMS, Love Me for Who I Am – The Feminist Wire

Home / Activism / EMERGING FEMINISMS, Love Me for Who I Am

EMERGING FEMINISMS, Love Me for Who I Am

I am nothing like the girls advertised in by the media. I am 5’1”, I weigh 125 pounds, my breasts are not that big, and the space between my legs is nonexistent. I always considered myself to have an average body, and like many girls, I sometimes praise it, and other times I shame it. Just like a number of my friends, I (regrettably) worry about what others think about me, and it only takes a couple of words for someone to ruin my day. Since I tend to shroud my feelings with a smile, whoever insults me never really understands how much their words impact me. People’s comments have affected me for a long time and you would think that people would keep those critical and unnecessary thoughts to themselves, but they don’t.

A couple of nights ago, I was talking to one of my classmates. I have only known him for about five months and our conversations were usually arbitrary, but for some reason that night we were talking about my body type. He went from commenting that I was short (which doesn’t insult me at all), to saying, “no, you are not skinny at all.” I don’t think he is capable of understanding the power of his words. I felt so enraged by his comment. The way he freely categorized my body, women’s bodies, and people in general, thinking that a simple label could define who we really are simply aggravated me. I realized that people like him are the reason why I call myself a feminist.

I am tired of being surrounded by people who classify others according to their physical appearance. All genders go through this on a daily basis, but for some reason people deliberately speak against girls and women because according to society, “girls and women need to look a certain way in order to be enticing.” I do not want to keep convincing my girlfriends that they are beautiful, just because someone else made them believe the contrary. I am tired of trying to make my body look a certain way, in order to satisfy a stranger’s needs and standards. I want me, and every single woman, to believe and realize that our bodies, and every aspect about them, are divine in spite of the flaws that others may point out.

The night I was told that I “wasn’t skinny at all,” I had an epiphany. As that boy made a doltish comment about my physique, I realized that my body was a representation of so much more. He (un)consciously shamed my body and, to me, he was shaming millions of girls. Herein is the real question: Why shall we be judged by our measurements, when the sum of our parts is so much greater than our worth?

No girl deserves to be called “fat,” “ugly,” “too tall,” “or too short.” From now on if you say anything to us, it is that we are beautiful. Nobody should get used to being insulted or harassed. We are taught to think it is normal to feel uncomfortable with whom we are, and we believe that confidence is an unusual or negative trait to have—but as I am learning this should actually be the other way around. Let’s stop listening to others, and start listening to ourselves because some members of society continue to be too ignorant to see beyond the superficial and material things. The day we learn to live with our hearts will be the day that we experience gender justice, happiness, and peace 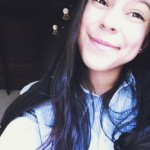 Natasha Chanto is sixteen years old. She was born and raised in Costa Rica and her ultimate dream is to live in a big city. In Natasha’s words, “writing is one of the most satisfying things to do, as it not only shows my innermost feelings and aspirations but it is the source through which I can freely express myself. I want to write about things that matter; those things that we are too scared to talk about with others.” This is Natasha’s first publication and she hopes it has an impact on somebody’s life.