EMERGING FEMINISMS, Screws, Servos, and Sexism: How Men Almost Made Me Quit Engineering – The Feminist Wire

EMERGING FEMINISMS, Screws, Servos, and Sexism: How Men Almost Made Me Quit Engineering

During my sophomore year in high school, I joined the robotics team. The majority of the team consisted of mostly boys; my senior boyfriend, his best friends, several junior boys, and Jess, an ambitious redhead that would later become my best friend. I felt uneasy about the lack of girls on the team but with the knowledge of building that I possessed, I convinced myself that I was here for a reason and that I soon would fit in. I couldn’t have been more wrong.

Competitions began in October, quickly setting us a buzz with new tasks to accomplish and robots to construct. Our coach informed us that we all would have to apply for positions within the team. Eager and ready, I began to complete my essay for Vice President that night. These boys, and this team, needed some diversity and direction. Why couldn’t I be the one to bring that?

The next week the positions were listed. I was the “Marketing Manager,” a new position thought up for me on my behalf. In the end, it turned out to be a fabricated job. Jess, to her dismay, was treasurer. She resolved herself to a small smile, when a hand shot into the hair.

“Excuse me,” a whiny voice commanded, “but she shouldn’t be treasurer. Why would we trust her with money?”

Jess’ face grew red and she waved off my look of shock. Confused, I later pulled her aside. “It’s fine,” she smiled sadly. “I’m pretty used to it by now.” I didn’t understand. Everyone was friends here, why would they be cruel to each other?

I wish that I could say that the men on the team treated each other like this, but I can’t. I walked into practice one day, shyly asking how I could help. Several of them looked at each other, then responded, “You can sketch the robot. We don’t need any help.” I didn’t mind doing the drawing. They can’t draw, I assured myself. You should be glad they’re asking you to do it.

But I shouldn’t have been glad. I should have told them no. Instead, I suffered under the harsh words of my team for the next four months. I was laughed at when I attempted to pitch ideas. I brushed it off. I asked for instruction on how to wire the computers, and they told me no. I kept my head down and did as I was told, but every day I was upset about it.

“That’s just how high school boys are,” my dad told me.

I responded, “It’s not fair though.”

“You’re right, it’s not fair,” he sighed. Then, he said words that I will never forget, “But that’s just how it is.”

It got worse and worse every day. I would leave in tears and I would panic. I would rant about the things they told me to my friends. I would listen to them when they told me that I was only here because of my boyfriend, not because I was smart. I would listen when they would call me childish when I attempted to retort back at them. They would tell me I was a bad person, a bad girlfriend, and I believed them.

I allowed a group of teenage boys to determine my worth. I allowed them to belittle me, berate me, and tell me I was dumb. I was told that I was bossy and whiny if I attempted to say anything about it to anyone. I lived in silence, hurting with every word.

The night before our first competition, they all sent me long text messages calling me a child. They told me I was overdramatic and sensitive, that I had no place in the workshop. I cried to my mom, begging her to let me stay home the next day, and she gave me a long hug.

“The best thing you can do is go,” she told me. “Prove them wrong.”

I finally told our coach the next day about all that had been happening. I remember him looking at me and saying, “You’re absolutely right. It isn’t okay,” and I felt as though a weight had been lifted off of my shoulders. The team members, reluctantly albeit, had a meeting where our coach called out their behavior and they were forced to apologize.

Even though they had to apologize, it was half-hearted. Things were still rocky. I would enter the workshop and people would exchange glances, often working in silence. Eventually I tried to talk to them, asking them to show me how to do certain things, and they began to engage with me more and more. The boys who initially pushed me away are now the ones that build with me, exchange knowledge with me, and accept me. If I hadn’t spoken out, nothing would have changed.

However, I was still the one who had to do the work of reaching out to them. My six-year-old brother got into a “fight” at school. They had to apologize, and several days later everything was fine. Why is it that men can get over disputes with each other so quickly, yet when women are involved it seems irreparable and women have to do the work of repairing the relationship?

I went through a process where boys thought it was normal to determine my worth for several months. Jess dealt with it for several years. I’m a junior now and the girls in robotics are still told:

“You’re too pretty to be smart enough to be in robotics.”
“I didn’t know you could build.”
“You actually know how to use a drill?”

I’m much more resilient and out-spoken this year to the people who attempt to discourage me. I watch as their eyes shift to the floor when I call them out on their behavior knowing that I’m right. It’s a feeling that, while frustrating, is still satisfying.

This year, I am on two different teams that will be competing at major regional competitions. I am one of three girls out of almost fifty people on one team, and am one of two girls on the other. While it can be nerve-wracking to be in that position, it is reassuring to know that my other team members give me the respect that I deserve. My ideas are welcomed and are seen as legitimate. I build without being questioned. I finally feel welcomed in this positive environment.

When I go to college, I want to study biomedical engineering. I want to build prosthetics and medical implants for people, and I want to make more realistic and accessible parts. However, in the back of my head, I still hear the voices of the people who tell me I can’t, the people who want to discourage me. Even if I can face it, it still hurts.

Women in engineering are constantly dealing with sexism and emotional abuse. I almost quit doing something that I love because of people’s words and behaviors that only they found to be acceptable. I was told that I couldn’t do the same work that boys could, and because I am a blonde teenage girl my abilities are compromised—none of which is acceptable.

When you are belittled into thinking you aren’t enough—when you ask yourself why you attempt to do what you love, when you are told that you can’t—make your mark, call people out, and demand accountability. I promise it will be worth it. 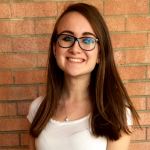 Jordan Prochnow is a young writer living in Denver, Colorado. After high school, she plans on studying engineering or creative writing to make a positive difference in the world. Jordan loves dogs, pretzels, crime shows, and Target.