I AM NOT THE MOST IMPORTANT FOREST YOU’VE BEEN IN

a Palestinian is killed every 4 days and i’m crying because my bus stalled in the snow so now i’m late to class. i’m crying because i thought N was better than that but then he sent me dick pics on snapchat without fucking asking me. i’m crying because you aren’t the safest country i’ve been in. i’m crying because people die every day in the streets and i’m trying to figure out how to tell mom that i’m not a girl. i’m trying to forget about how J ruined everything for me but now i’m letting J message me on facebook once in a while because grudges don’t do anything because my hands used to be softer and not brick-dust. i’m trying to ignore the radio when all about that bass comes on because fuck that song fuck you and fuck the construct of gender and time i don’t have enough and no body has enough. i’m trying to feel good about everything but my grandma is jewish my parents are muslim and ‘im really really really really really gay. i’m trying to figure out if the moon has any vacancies. i’m trying to give I a compliment without saying something rash like uhhhhhhh you’re the dust i want thrown onto my casket because you sound like rainfall or ummmmmmm do you mind getting melted down into ink so i can needle you into my skin even though stars forbid it? i’m trying to build back the walls everyone tore down but i’m scared of hurting the hammers head because headaches are the worst especially when you want to fix something that is cant-wont-un-not-dis fixable. i’m dying but i refuse to get buried until i unglue myself from I’s blue cul-de-sacs which will be at approximately never-o-clock. i’m dying but not unless it’s on pluto. i’m dying before all the water on earth eats us whole and i’m sad about that too. i’m defying. i’m defying because i’m still alive just barely but still. i’m defying because being dead is not optional so i’ll cry and try but until then do you want to go bowling with me?

but i do not feel alive & it’s taken me a few years to get here. the walkway is slippery with old tears & the front porch hasn’t stopped dripping blood for approximately eight days. who do i talk to about this? the government?

i did not ask to die this way. i’m wondering what kind of clothing my parents would bury me in. they would pick a dress even though i had asked multiple times to be cremated. mom PLEASE shoot my ashes into space. beyza, what kind of a daughter are you?

i don’t want worms in my veins. paper cuts on eyes are something i will never stop crying over. feeling sand in between my toes reminds me of fucked up summers. i do not feel alive & i don’t want to be dead.

let’s play kickball with each others mouths. they are

useful for two things, but my legs get tired &

it’s supposed to hit 60 tomorrow. maybe we can

go to the park behind the forest where i

worked with my knees to beat you twice.

where i won twice. where you watched me

when your cheeks get pink

i start to think about how our child would look

& how i’m not trying to be gay right now, but

into mine makes a really nice sound.

we’re having a really bad day.

when s.j.a explained the difference between

being someone’s rock & being their stone,

i learned. i tried to give each rock individual faces,

but it wasn’t hard because there aren’t many.

stones take time to build. they take hundreds of years.­­

around them or the ocean on a day when it’s -20 degrees.

those are better than wet brown hills, than pits

that never got the chance to turn into a park.

eventually we will have to attempt reaching the

moon by getting on our toes & growing. this is

the mountain that has the slimmest peak

& i’m afraid we won’t both have room to stand.

people get smaller & smaller each time

you back away. i am sitting here looking

at the clouds back away from me.

i’m praying but my version of praying

i’m writing this to tell you that instead

of a casket i’d prefer a window.

p.s., my phobias don’t have official names yet,

can you take care of that for me?

p.p.s., even if the sun is hurling towards us, it’s still setting in some sense.

**”i am moving into a new house…” was previously published in the first issue of alien mouth.** 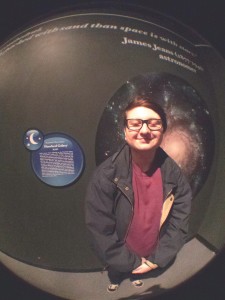 beyza ozer founded probably crying review while eating a bagel. their work has appeared in/is forthcoming from skydeer helpking, voicemail poems, luna luna magazine, & others. beyza is the author of GOOD LUCK WITH THE MOON & STARS & STUFF (bottlecap press 2015). they are an assistant editor of yesyes books, an associate editor of big lucks books, & social media coordinator of the lettered streets press. beyza lives in chicago, on twitter, & on tumblr.