In England, where I paused my mother’s period

And ‘full stop’ means a period.

Not drip after drip.

The end of something.

No baby this month. Period.

in a porcelain bowl for a week.

Coughing to an end 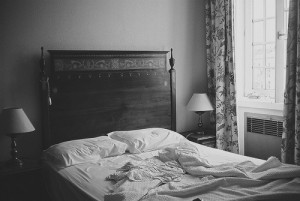 meant very little, as her mind tumbled
into dementia. It appeared as an ingrained relic

of social convention while she mumbled stories
about cities we swore she had not been.

We were confused when she spoke
about the Air Force pilot she had loved,

how she wrote letters to him
until they went unanswered.

She traced the shape of a daisy with her finger,
the shape the stain had formed on the bed

when her body made her labour
too soon, reappearing each change of the

clocks when the mattress was flipped until she
relented, and left the memory hidden by

the depression of her body cast in the springs.

M. J. Arlett is an MFA candidate at Florida International University. She was born in the UK, spent several years in Spain and now lives in Miami. Her work can be found in The New Luciad, the Eccentric Press Poetry Anthology, and is upcoming in Portland Review.